Login to add items to your list, keep track of your progress, and rate series!
Description
In the Iberiko Buta series:

Vol.1 Iberiko Buta to Koi to Tsubaki. (Iberico Pork and Love and Camellia)
Irie "Iberiko", leader of the Pigs Raging Clean Up Crew, is rumored to go on uncontrollable rampages when angered, so when Tsubaki's friends accidentally litter near the Pigs' high school and piss them off how is it that not only does Iberiko accept their explanation but also invites Tsubaki to dinner?

Vol.2-3 Iberiko Buta to Koi no Dorei. (Iberico Pork and Slave of Love)
This is a sequel to Genji and Yoshimune's story in Love and Camelia which tells about Genji's one-sided feelings towards Yo... More...
In the Iberiko Buta series:

Vol.1 Iberiko Buta to Koi to Tsubaki. (Iberico Pork and Love and Camellia)
Irie "Iberiko", leader of the Pigs Raging Clean Up Crew, is rumored to go on uncontrollable rampages when angered, so when Tsubaki's friends accidentally litter near the Pigs' high school and piss them off how is it that not only does Iberiko accept their explanation but also invites Tsubaki to dinner?

Vol.2-3 Iberiko Buta to Koi no Dorei. (Iberico Pork and Slave of Love)
This is a sequel to Genji and Yoshimune's story in Love and Camelia which tells about Genji's one-sided feelings towards Yoshimune (they are both part of Irie's crew). Less... 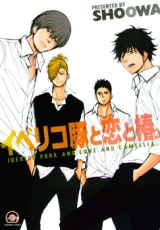 not what I expected.
by sorap
March 30th, 2022, 12:20am
Rating: N/A
I liked the first couple, even If they were basic. Tsubaki and Irie were a lot funnier. Gen and Yuu's story turned too long for what it was. even when it ended, nothing really changed, and the story is kinda dark with Yuu's past. It was a good theme with the trash collecting and so, but it could have been better taken. also, gen always wanting sex, like ALWAYS, is boring and annoying, even gross you could say.
Was this comment useful?  Yes

Full of Shoowa goodness
by OmNom
December 5th, 2019, 10:21pm
Rating: N/A
I'm so happy this series has finally been fully scanlated - it's been many years since I first started to follow it haha *cry laughs*. I really enjoyed the ride and all the thrills and laughs and feels that this manga provided; it certainly was a great journey from start to finish and packs everything that Shoowa is good at, from hilarious dumb comedy to gut wrenching trauma backstory to scrumptious romance and relationships to character growth and personal development, all while still keeping it entertaining and fun with her eccentric sense of humour. Truly a full package in every sense.
Was this comment useful?  Yes

Read it for the second couple !
by nausicaa70
May 11th, 2017, 7:08am
Rating: 7.0  / 10.0
I didn't care much about the first couple. It was just typical and... boring.
However the second couple's story is interesting so far and I really love both of the mc ! They have such good chemistry

The art is as fine as usual !

One of the best
by varianthart
December 11th, 2016, 11:44pm
Rating: 9.0  / 10.0
This may be an author who you either get or you don't get. Everything she touches is gold, for me. I don't enjoy the stuff that most seem to, and this is different, funny, clever, and well-paced in an outside of the box kind of way. Nothing bad to say. Also a huge fan of her artwork.
Was this comment useful?  Yes

now that's romance
by uke-lele
March 19th, 2016, 2:54pm
Rating: 8.0  / 10.0
Good-natured humour spiced in and the manga never took itself too seriously. The entire premise is nonsensical in the first place, so what less can you expect from the story? Hahahaha. While pig references are littered throughout the manga, it's more of the camaraderie and misadventures that stood out. I found it amusing because it's reflective of how a bunch of boys would behave in real life, though maybe in a less over-the-top manner. Maybe not build "breeding dens" for each other, but the gist is there alright.

The first story wasn't particularly remarkable, but it had its own quirky charm. At least we had no whiny crybabies and unneeded prolonged angst, though yes, the story could have been developed much better without falling into a bunch of cliche tropes. However, there were some redeeming points (mostly exemplified by the bad humour). I also disagree with another commentor that Iberico (seme) was expressionless. I'm not feeling Tsubaki (the uke) though, not that he's annoying, but he's unremarkable. But still funny.

What really sealed the experience for me was the second pairing, though. It manages to pull about everything off just right - a little heartbreak, lots of longing, quiet gazes and those shared touches that say a lot more than words. Damn right that they got their own volume. Now if the author would put in a bit of effort to develop them even more, this manga might end up being something memorable in the vast seas of bad yaoi. (Actually, I think it already accomplished that, because I bothered coming back for it.) I'd say it captures the essence of young love: wanting someone so badly and using excuses to stay close to them but not daring to admit it because of your pride, fuelled by this urge to possess them and knowing you shouldn't, all of these while hoping they'll look in your direction someday. It's a bittersweet cocktail of euphoria and melancholy all at once. They're sitting in front of you, with you, but not with you either. Unrealistic? It hits home pretty hard for me, so I can empathise with it even though my life isn't a manga.

Finally, the most important part: the sex is awesome. That's a huge plus point, because well, who reads yaoi purely for the romance... right?

NO IT'S ACTUALLY QUITE SAD
by TormentObelisker
February 22nd, 2016, 8:34am
Rating: 10.0  / 10.0
Barring the first two chapters, which were cute and comedic, the rest of this series (so far) focuses on the other pairing: painfully-in-love Genji and poor, poor Yoshimune. The dynamic between this couple is a lot more bittersweet and their story deals with much more serious issues. (Such as trauma)

I feel like some people might write this manga off because of the more frivolous initial story (which, in my opinion, is still quite funny and cute), but this work has a lot more to offer. I find Yoshimune in particular to be a complex and realistic character, but that's jUST ME MAYBE.

I'm sorry, this is my first time writing a review for anything ever so I hope I did okay. In any case, I highly recommend this manga!

Meeeeh?
by Snowytimes
February 14th, 2016, 8:12pm
Rating: 4.0  / 10.0
Its ok. The art isnt very good and the characters are unreasonable. I guess its funny? The chapters are stilting and awkward and it makes me wonder if there are pages missing or at least hoping for further explanation. Dont read it expecting something amazing like I did
Was this comment useful?  Yes

AMAZING
by herenk
July 29th, 2015, 5:10am
Rating: N/A
I really loved the newest chapter of this manga. The side story's characterization is phenomenal, and ever so delicious. Will update when manga updates more, but for now, I highly suggest you read this!!
Was this comment useful?  Yes

Funny
by JapanRocks
September 4th, 2013, 9:21pm
Rating: 9.0  / 10.0
I like Shoowa's works. The themes can be a hit or miss for me , but I enjoy her comedic sense and the reactions of her characters. She also tends to have really unique story elements and the H scenes are one of the sexiest in the yaoi genre.
I thought the first couple's story was cute but forgettable. I'm really looking forward to the second couple's story though, partially because of curiosity and the fact that I love the character design of the seme.
Was this comment useful?  Yes

Gang-themed manga with a twist
by anibebe
May 20th, 2013, 1:13am
Rating: N/A
It's kind of refreshing to see tough boys gather to do voluntary social work. Which makes one wonder why the litterbugs around them would deem the crew delinquents. Then again we're treading on grey areas - one can't condone violence against litterbugs (even for their violence against the environment).
Was this comment useful?  Yes