Login to add items to your list, keep track of your progress, and rate series!
Description
In an ancient world where martial artists reign supreme, Unseong can only watch as his master is brutally beaten to death after a false accusation of practicing forbidden demonic arts. Even after a valiant fight, he fails to kill those responsible and faces his own end. But fate has other plans… Instead of taking his last breath, he awakens as a child, training to be an elite soldier of a demonic sect. Now Unseong must embrace the demonic arts and harness power in his ultimate quest for revenge. 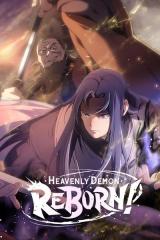 One of the few the I havent dropped from my reading list
by Joese
March 22nd, 2022, 11:56am
Rating: 10.0  / 10.0
There's none of excessive gibberish typical from martial arts manwas, the story's quite straight forward, doesn't have any fillers and it's mostly in the MC's POV and some scenes of the enemy camp. You really feel how the author doesn't want to milk out the story, only giving minimal recap side notes/scene when needed and one small flashback.

Power levels are consistent and the plot advances at a natural pace, with all the characters showing growth (given the complexity of the story is mostly centred in warfare and vengeance (not as if anyone could go training in the middle of a war)), it has 1 on 1 battles but once they're done they aren't the main focus of the story)

Note: I dont know what tiankioo under me was reading .Was he expecting a love story or the backstory of every random character we see for first time?

Blah blah
by tiankioo
February 22nd, 2022, 6:22pm
Rating: 4.0  / 10.0
I keep picking this one up and dropping it. Every time I try to read it, I get fed up with the plot never going anywhere. It's sooooo slow. Chapters barely do anything at all. Fights are boring. Characters have no depth. The start was really interesting, but this one turned out to be a real disappointment; There's much better elsewhere.

Note: I don't know what Joese was above me was reading, but his review/comment is just a fart in the wind. You talking about the "complexity of the story" made me crack up. Sure, dude, sure. Read a book sometime, maybe then you'll understand that characters are supposed to have more than surface-level depth and the rest of the forgettable side characters don't have any real purpose. The plot is a lazy half-baked snorefest that even after 80 chapters, barely did anything at all.

All things considered, this is one the better cultivation stories out there.
by Samken
December 19th, 2020, 9:09pm
Rating: 7.0  / 10.0
The protagonist was a direct apprentice of the current successor of the Spear Master Sect, a sect from the Orthodox/Rightouts side of the Murim. However, he and his master were framed for the possession and studying of a manual of Demonic arts, one of the heaviest crimes for a martial artist of the Orthodox Faction. This leads to a combined attack by several leaders of big Orthodox sects and the Martial Alliance leader himself, where they both perish, his master earlier trying to protect him and he followed soon after, but at the exact moment he meets his end, an ancient artefact gave by his master glows and just a little afterwards he finds himself reborn as a young trainee of the Cult of the Heavenly Demon.

From there on, he has one thing in mind, revenge against the martial alliance and the members of the Orthodox Sect responsible for the downfall of the Spear Master Sect, he'll use both the experience he had as an Orthodox Martial Artist and his new opportunity of being raised from the ground up as a member of an Unorthodox one to get to new heights for his revenge plan to succeed, and one key factor heavily depends on his success on becoming the highest rank member in the cult, The Heavenly Demon.

Great story. Would recommend.
by misukinekochan
April 16th, 2020, 5:34pm
Rating: 10.0  / 10.0
This Manhwa has an excellent combination of story and art. The action scenes are fluid, and the storyline does not feel forced. There is no exaggerate pushy romance and the MC is very likable and smart. If you like MCs who aren’t impulsive then this story is worth a shot. Can’t wait for the next update!
Was this comment useful?  Yes

Simple yet amazing
by ChiliConCarne
October 1st, 2019, 4:14am
Rating: 9.1  / 10.0
Simple reincarnation revenge manhwa executed with a good combination of writing and art.

The writer and the artist create a simple world with consistent pacing and art panels from many different perspectives, thus creating great immersion. Even though some parts are drawn with minimal effort, the multiple given perspectives and simple yet distinctive faces and emotions give the story a unique feeling. The continual explanation of the world, situations, thoughts, feelings, etc. leave little space for plot holes. This constant flow of information, logic, and continuity motivates the reader to have expectations and theories about what might happen. Also, lots of the recurring themes of manga, such as; plot armor, oversized tits, and obvious comic relief are absent which gives the impression of a professional fantasy comic.

After reading multiple times till ch.66 I would recommend this manhwa for people who like mature and consistent "weak to strong" type stories.
Really looking forward to the next season! (nov.1)
Was this comment useful?  Yes

At last another good cultivation series
by PZcolo
May 19th, 2019, 5:52pm
Rating: 8.0  / 10.0
Though it's too soon to tell since it's only been 31ch this one is off to s good start. A manhwa that takes itself seriously, The are no dumb comedic reliefs so far, no sudden power-ups, no unexplained happenings and no much plot armor (again, so far). It's also coherent and consistent, has a decent MC and from we could see far is set in a sort of grim setting where the heavenly and demonic sects fight each other for supremacy (to be honest, there hasn't been much world-building yet). Lastly, the drawing flow of battles is mostly good and the art style is nice, albeit, pretty standard in manhwas.
The main drawback is that as all cultivation series there ain't much originally to be found, just another cultivation-martial arts revenge story but at least it's well presented and well done. Also, anyone hoping to find originality in a cultivation story is bound to be disappointed imo.
Also, pace is a tad slow which I don't dislike, I prefer a story that takes it time explaining and developing itself thou we'll see how it holds up after 100ch or so.
Overall, I have high hopes for this one, is only been 31ch after all so I hope it doesn't ruin itself later.