Login to add items to your list, keep track of your progress, and rate series!
Description
The cruel Duke Dreux of Faucigny is a lovestruck puppy around Nöel—all thanks to a random magic spell that was cast just as he was about to execute her. But with the spell’s power now waning and on the fritz, his shifting moods zip from dramatic professions of eternal love to cold threats of death. Exhausted from the emotional whiplash, Nöel must find a magic spell to not only save herself but also her enchanting fairytale marriage before she loses her beloved and bewitched “Ru” forever.

Official Translation:
English (Tapas, Radish), Indonesian, Thai, S.Chinese, T.Ch... More...
The cruel Duke Dreux of Faucigny is a lovestruck puppy around Nöel—all thanks to a random magic spell that was cast just as he was about to execute her. But with the spell’s power now waning and on the fritz, his shifting moods zip from dramatic professions of eternal love to cold threats of death. Exhausted from the emotional whiplash, Nöel must find a magic spell to not only save herself but also her enchanting fairytale marriage before she loses her beloved and bewitched “Ru” forever. 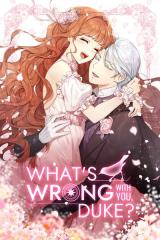 
Category Recommendations
The Duke's 99th Bride
Seducing the Monster Duke
The Villainess Behind the Mask
It Was a Mistake, Grand Duke!
I Thought It Was Time!

First manhwa to make me laugh!
by mitoshibi
September 14th, 2022, 11:03pm
Rating: 9.0  / 10.0
Art: 7/10 - The characters and designs are beautiful, and the simple art style really fits the story and characters. When the story wanted to be taken seriously, the art style didn't take away from it. I felt the backgrounds were fitting and the settings were really recognizable.

Story: 9/10 - I was skeptical at first reading the summary, and then the first few chapters were iffy, but the story actually unfolded really beautifully and had PERFECT twists along the way. I saw some people upset about the twist, but I think it was unique and had a satisfying payoff. The humor was great and the serious moments hit really hard. I found the entire thing hard to put down for all 133 chapters.

Characters: 10/10 - In the beginning, I really wasn't feeling most of the characters, especially the FL. It's easy to question her motivations and kind of peg her as... taking advantage of the ML? I agree that she did to some extent, but I feel like they explained her reasonings for her actions well enough and the circumstances surrounding them. Why didn't she leave? Well it sounds like the ML (under her spell) was going to harm himself, which I imagine she felt responsible for, and then would've sought her out every time she tried to leave. She had no indications that the spell would fade or break at any point (unless I'm remembering wrong). When she did realize the spell was breaking and sought another way to strengthen it, I only disagreed with her actions after the threat to her life was no more. I even felt sorry for the classic female rival character and understood the motivation behind her actions. Overall, the character development was great and I loved all the main cast.
Was this comment useful?  Yes

All good except the female lead
by Shygirlz
December 23rd, 2021, 1:36am
Rating: 6.0  / 10.0
It's funny, the premise is interesting, the art's really good, and the male lead is great... but man I really can't seem to like the female lead and honestly that's probably the most important factor in how much I enjoy a story.

Whereas the male lead is sensible and a decent person (not at all like the monster I thought he might be from the manga description), the female lead is nothing but nonsensical. She worries about being killed when in reality there's zero chance of it happening and he's not even portrayed as cruel at all just no-nonsense and strict. Usually female leads have strengths of some sort, but no such hint of that has been shown either, other than her ability to live like a peasant (which all other peasants can do). All she does is cry, and in the first twenty chapters there are hardly any chapters where she doesn't. She "loves" an unrealistic magic fake puppy version of him but then gets jealous over the actual version of him who she completely rejects. Her actions in general are all of someone who doesn't think about the consequences, and when it's not crying or being fawned over she's usually doing something that's harmful or potentially harmful to herself, the duke, or both of them.

Seriously a shame that everything else is so good but the female lead is so bad. If the author had just made her competent at *something* this would've been easier to read. Unfortunately, the villainess in the story was actually way cooler of a person - someone who really liked the actual male lead, and then tried her best given her circumstances when love didn't work out for her.

Why Are You Doing This Author?
by Utsukushii Yume
April 5th, 2021, 8:31pm
Rating: N/A
The plot of this Manhwa is the ML is brainwashed by an unknown magic to fall in love with the female lead.

The FL falls in love with the brainwashed ML and wishes for him to stay brainwashed b.c 1) she doesn't want to die and 2) she likes him better when he is brainwashed.

Her fear of being killed gets removed in about 10 chapters or so leaving us with a FL who only loves the ML when he is brainwashed. This would actually make for some good drama but the author never addresses it. I find it hard to believe that the FL was madly in love for 1 year, and never once felt guilty enough to find a way to set her beloved free. She gets jealous, but you never see her acknowledge that given the situation that the man was FORCED to marry her, she really has no right to be jealous.

She never feels bad for the ML and the problem with that is I am up to the part where they are falling for each other, which means even if the author decides to address the things I just mentioned, it won't matter b.c now it will only solidify the issue of the FL not caring about her actions until it inconveniences her.

Having a FL who doesn't care about others is fine when you do it right, but this Manhwa makes the FL out to be a innocent girl who is somehow suffering more than the ML, she plays the victim all the time and never even acknowledges the things she should be feeling a little guilty about.

If you can overlook the fact that the author will ignore having the characters reflect on the plot trigger that forced them together, then the art is nice and you might get a good laugh out of the shenanigans of the duke flipping personalities.

Had to stop or else another night of no sleep
by bluedrop
March 10th, 2020, 9:25am
Rating: 10.0  / 10.0
There were some parts that made my heart ache. Very sweet, a lot of laughs, and some very sharply emotional moments.
Was this comment useful?  Yes

Unique
by kira6
May 2nd, 2019, 1:55am
Rating: N/A
Out of all the "normal girl marries a noble duke" stories, this manhwa has the most unique premise. The duke is literally bipolar due to an accidental magic spell and flip flops from lovey-dovey to stick in the mud in split seconds. I didn't think I'd be that interested at first, but it's got me hook, line, and sinker. The main character is not the sharpest tool in the shed, but there's something about her that's really endearing. I'm looking forward to the rest although I can kind of see where it's going, but I'm here for the long ass ride.
Was this comment useful?  Yes