Login to add items to your list, keep track of your progress, and rate series!
Description
I absolutely hate a world filled with sweet talking. I'll fight the Heroine's rationale head on!!!

After waking up as the villainess she admires so much from her favourite otome game, Alicia trains hard every day to become the greatest villainess of all time. 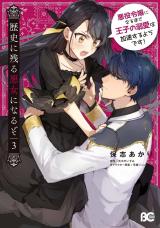 No logic + "I'm not like the other girls" MC
by yukinoluna
November 13th, 2021, 1:17pm
Rating: 1.0  / 10.0
These types of stories make me confused sometimes. The protagonists often mock the OG heroines for being too much of a Mary Sue, so they idolize the non Mary Sue villainness. Now, there is nothing wrong with hating Mary Sues, but just because you hate Mary Sues doesn't mean you would automatically like someone who's the exact opposite of a Mary Sue - a bitch. Huh? Isn't it more logical to like a side character or something that's not a Mary Sue but not a bitch either? I don't understand liking assholes just because you don't like overly nice people. This story is exactly like that. The MC literally likes how the OG villainess is bitchy and doesn't like how the OG heroine is a Mary Sue. But yet the manga doesn't exactly depict WHY the MC doesn't like the OG heroine. Throughout the whole story, the MC reeks of someone who is a try hard "I'm not like the other girls" (or at least, I'm not like the OG female lead I'm totally different) Mary Sue. Which is IRONIC considering that she hates the OG protagonist who is a classic "perfect and gentle"Mary Sue. Uh, if both are Mary Sues I rather pick the perfect and gentle one. *rolls eyes*

Also, while I have no idea what her mental age is, the MC logical thinking is like that of a child despite transmigrating. Her leaps of logic make no sense and I sometimes cringe reading it. The most important thing is why the heck is she so darn obsessed with the OG FL? Every single one of her actions are just planned based on trying to over throw the heroine and the reasoning of being the best villainess in history isn't convincing enough to explain why. It just seems like she's a child who just wants to be an asshole to the OG FL who literally hasn't done anything to garner hate. Did the OG FL steal the villainess' man? No. Did the OG FL use crocodile tears to toss blame onto the villainess who has done nothing? No. This isn't like other mangas where the OG FL was actually bitchy inside and hence the MC has to beat them. No. The MC is just creating scenarios in her head for her to hate the OG FL who has done absolutely nothing wrong other than to be a Mary Sue. And in doing so, the MC becomes a Mary Sue herself.
Most importantly, I have no clue why they made the Male Lead 5 years older than her. If she was already a grown ass adult and he was five years older than her it would have been fine but no she's just a child and seeing him somewhat making advances on her make me shudder.

Anyway, if you like MCs who behave like they are "not like the other girls" and the are also conveniently OP and childish then this is for you.