Login to add items to your list, keep track of your progress, and rate series!
Description
From Sumie:

The Shou Dynasty is an era of widespread famine and corruption. Kouran, a girl from a village that cannot afford the taxes, sneaks into the palace to steal its treasure. There she encounters a handsome young man, Shiki. The two meet again the next day, when news that an assassin has killed the crown prince and made off is being circulated all over the country. Kouran suspects Shiki is the assassin but his genuine kindness perplexes her. 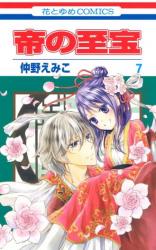 An enjoyable read
by amazinge
June 17th, 2018, 5:33pm
Rating: 9.0  / 10.0
The story starts out quite predictable (which I'm not sure was the author's intention or not), but gradually becomes less so, in my opinion. Though it does have its cliches, it remains amusing and fluffy. The main leads' relationship exudes positive vibes and uwu urges. Both of them are likable, as well as many of the side characters (the grandfather serves wonderfully cute comic relief). The art is adorable, which most definitely contributes to the lightheartedness of the reading experience.

Recommended for anyone who just wants some fluff, lolis, discrimination amongst social classes and later disproving those misconceptions through a series of mishaps, and giggles.

Cute so far
by Lacy99
June 6th, 2017, 10:55pm
Rating: N/A
So far I'm enjoying this. It's shoujo, so don't go in expecting it to be realistic or historically accurate. One complaint of mine is that the female MC is 18 and as part of the storyline looks more like she's 7-8. It would be one thing if it was just her face and her height, but so far EVERYTHING about her looks like she's a kid. Her body, her face, even her hairstyle, everything about her screams that she's a small child. I've seen some pics from future volumes which imply that her hairstyle changes, which makes her look a little older, but I'm a little impatient. Until then, it feels icky watching someone who looks about 7 fall in love with an adult man (and him falling in love with her too). Still, it is a cute manga and I'm looking forward to reading the rest.
Was this comment useful?  Yes

Lukewarm
by PhieX
May 27th, 2017, 1:15am
Rating: N/A
An historical shoujo manga where the girl protagonist is so poor that she has to sacrificed herself to the highest dude (in term power and money). This theme was already done by other mangaka, which has executed it better than this, imo. The new appeal of this manga is short-baby looking female main character and younger-hot dude, which is a hit thing nowadays. While the female main character is the most active one, hard-carrying the most conversation in manga, the man main character is rather dull, uninteresting, the cool type who will lost his composure when it's about his beloved. And then, the mangaka add some hotties into the story and makes it looks haremesque or fanservice for bl lovers.
What makes me sad is
Spoiler (mouse over to view)
when the girl decided to put down her right to study more in another country. Isn't she supposed to be strong and independent female character? And it is rare for female character to have a chance to study abroad. She could learn more about medicine in another country, rather than with her grandfather. Given by her age, I think it a crucial time for her to study. but whatever it is a shoujo manga. I just disappointed of this plot
Nothing serious about this manga actually, just cute-fluffy manga which imo.. sadly forgettable.
Was this comment useful?  Yes