Login to add items to your list, keep track of your progress, and rate series!
Description
A young girl fights on the frontlines in war. She has blonde hair, blue eyes, and nearly transparent white skin as she flies through the air and mercilessly strikes down her enemies. Her name is Tanya Degurechov and speaks with a young girl's lisp while she commands the army. Tanya used to be one of Japan's elite office workers, but because of a wrathful god was reborn as a little girl. Prioritizing optimization and career advancement above all, she will become the most dangerous entity among the Imperial Army's sorcerers. 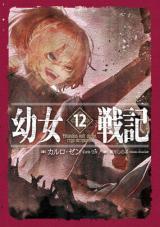 Good if you like the genre
by Wickian
July 1st, 2017, 2:16am
Rating: 7.0  / 10.0
I read the first volume, and a few annoying Approachable-Middle-Management-Type God tropes aside, it's good. I personally can't stand modern(meaning guns, tanks and explosives) warfare and can only slightly tolerate rigid military MC's, so it was extremely boring for me. If you are indifferent to or like that kind of thing, you'll probably like this novel.
Was this comment useful?  Yes

Youjo Senki is a story with a reincarnated protagonist - and many reincarnation stories often suffer from very similar problems:

If the experience from the previous life gives the protagonist too much of an advantage, there are no real challenges to overcome and things become boring to read.
If the challenges are always difficult to overcome, one starts to wonder, what point the reincarnation had to begin with.

Youjo senki skillfully avoids these pitfalls by making the reincarnation both source of the protagonists strength, but also source of his/her problems:

With the mind of an adult and the common sense of someone from the 21st century, the protagonist is able to quickly advance through the military ranks of a world stuck in a situation very similar to our world's World War I (just with magic added to the mix). But the common sense of the 20th century is different to the one from the 21st, and so many of Tanya's 'ingenious' ideas do not play out as intended.

Misunderstandings happen left and right, creating interesting situations and driving the story forward. Here I find it important to mention that these misunderstandings are of a different calliber than the ones you might be used to from many mangas and light novels: they aren't always quickly resolved, they often have long(er) term consequences, and they are satisfying to read. As a reader you *want* another misunderstanding to happen, which is very different from the often frustrating/annoying 'misunderstandings' that typically happen in other stories, which could be resolved in a single sentence, if people only bothered to actually speak with one another.

At the end of the day this novel manages to combine the satisfying experience from various different genres into one: be it the feeling of cheering for the underdog, the gratification of witnessing a plan thought up by an intelligent strategist, a bit of mindless 'in this scene the protagonist is totally OP'-action, the humor of something going right for all the wrong reasons, the experience of a world's lore and history slowly unfolding before you, etc. etc.

Youjo Senki borrows ideas from many sources and combines them into something great.
I do not know if the delicate balance between so many components can be maintained forever, but until volume 2 chapter 2 (my progress with the story at the time of this review) there aren't many flaws that I would feel worth mentioning.
Was this comment useful?  Yes

this is a seinen!
by neotzu
April 22nd, 2017, 10:55am
Rating: N/A
this novel is about philosophies and has a goal of thought provoking entertainment, this is not an action-flick or romance/comedy but is actually heavy in politics i know this might not be most people cup of tea but for me it is a refreshing change.
Was this comment useful?  Yes

Boring.
by Jandalman
January 5th, 2017, 2:42am
Rating: 1.0  / 10.0
Seriously the blurb on this page makes the premise sound interesting but once you actually read it the story is just full of internal monologues of characters and mind numbing fake technobanle. Reading the first volume and so far it has veen nothing but monologues and science experiments between mc and batshit crazy scientist with random gods thrown in making shit more confusing. No plot progression just a boring as hell novel. Dropped.
Was this comment useful?  Yes