Login to add items to your list, keep track of your progress, and rate series!
Description
Katase and Kohiwa are high school classmates. Liking someone so much it makes your head spin, exchanging kisses with every little chance, touching each other, connecting your bodies...
The main story is about two guys in the spring of their youth who find themselves rapidly drowning in one another. Also included in this highly-anticipated debut book are the sweet and heartbreaking one-shots, "Tranquilize" and "The Thorns are Hurting my Cheeks".

Latest Release(s)
v.1 c.1-6 + Extra (end) by Dangerous Pleasure over 10 years ago
Search for all releases of this series 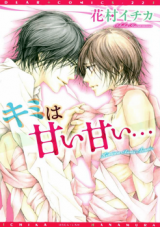 when i see this post i remember that i've read this manga a long time ago
by Miachann
July 27th, 2020, 1:08am
Rating: 10.0  / 10.0
yea i read this manga back then maybe few years ago.. but i dont really remember how the story goes, so i reread that again today and now i remember.. and and.. i remember i love this story so much i still do.. my fav stories still ch 5-6 thats no change lolol, both aki and keito is messed up and .. i feel bad for the uke aka keito, the seme is very abusive. and i always thought that the seme is Sadist and the uke is masochist, or maybe the seme is just the type who like to bully someone he likes(?) but i think they were s&m
Spoiler (mouse over to view)
when aki forced him to said that uke will belong to him for the rest of his life, the uke said 'if u kiss my foot i dont mind said it' i always love how the uke said that line
and me too, i love even the seme is sadist he is somehow still sweet inside.. and how he is really really love the uke deeply, yea i love this manga so so much especially ch 5-6, the story get me right in kokoro ಥ_ಥ

Bitter to rubbish
by WhiteIsBlack
October 20th, 2019, 3:35am
Rating: 1.0  / 10.0
Though I like the art and the manga is slightly better than Kimi no Iru Sekai Shikairanai, I’m giving it similar criticism and don’t enjoy it as well. I like the arguments, but I'm very much disappointed of the sex scenes.

It was okay
by Himeowchama
February 6th, 2017, 2:09am
Rating: 5.0  / 10.0
This manga got a 5 (as my rating) just bc of the first story, it was cute. The second one was okay. While the 3rd story was prettyyyy f'd up... I'm a little bit used to psychological SM or whatever, but what it irked me was the fact that love was involved. When love is involved, it pretty much makes a story into a f'd up one (in my opinion)

First Sweet then Dark
by hotarusasaki
January 15th, 2014, 4:12am
Rating: N/A
Theres basically 4 stories. Ch 1,2,3 are really sweet and to me just seemed really cliche. The characters annoyed me a bit too. ch 4 was of step-brothers falling for each other, it wasnt bad, just average and not very lasting. I really liked ch 5 though but its not everyones thing. Ch 5 is rather dark and twisted. Quite a lot of angst too. Part of the reason I liked it was because of how the seme was actually a lot nicer than he let on, He wasnt a flawless bullying Gary Stu but rather someone who just didnt know how to do things the acceptable way. The uke was great as well, he seemed like a weakling who just lets himself be pushed around but he actually is sometimes controlling and demanding. I also loved how the author wrote about how the seme would smile each time the uke got hurt or cried but you could hardly call it a smile, it looked like a painful grimace and shows how his actions are hurting himself too, you could see the pain in his face whenever the uke followed his orders. This chapter was amazing! Ch 6 carries on from ch 5 so its a peak into their life after getting together, this wasnt as good as ch5 and seemed more shallow and more focused on the sex. The chapter after "Secret Sweetness" was just outright plain and boring. Overall 7 as I really only enjoyed one of the four stories.

Nothing to regret or fawn on.
by Yankee-chan
October 23rd, 2013, 3:46pm
Rating: 7.0  / 10.0
I have said it before, that the drawing style of the author is somewhat unique and in my case I'm not going for the cute eyes, but the body builds and the scribble like lines. The outlines are light and give off a lively feel and that's somewhat nice, at least every now and then.

As for the stories included, they have their strong points and their weaknesses.

The first one includes a love triangle and as expected, there is always some angst included and painful to see drama. Anyways, the twist near the end was interesting and even somewhat unexpected for me. That's the reason I came to like this story, although in the beginning the thoughts and the characters, their description, have had a "too strong" contrast by times.

The second story about the stepbrothers didn't really stay in my mind, but the sadistic-masochistic pairing from the third story did. Yes, you will have to like those settings and types of characters, but somehow it was slowly getting me on it's good side. Aki and Keito have been given off this vibe, that they exactly need the other one to live balanced and feel safe. This need of the other one is just too strong, but this may count for both and so it's interesting, because in Keitos case you hardly see this till the end.

However, in conclusion reading this was a good way to spend my time, even though it wasn't able to make it into my favourites. Sighs.
Was this comment useful?  Yes

ANNNGGGGSSTT
by gwkimmy
September 22nd, 2013, 12:21am
Rating: N/A
normally i love angsty stories to death, but with proper characterization to back it up. the characterization in these stories were shallow at best, so all the angst felt super melodramatic and eyeroll worthy. i didn't really care about any of the characters or their relationships with each other. meh. a few sweet scenes. i didn't like the third story at all. im not into abusive rapey possessive semes.

the art is pretty great, though. i feel like if i stare into the eyes long enough, i might fall in them.
Was this comment useful?  Yes

The eyes
by MirayAllen
June 5th, 2013, 5:12am
Rating: 7.3  / 10.0
Overall I think the stories were quite good, even though I struggled a little with the dialogue more often than not. I think that in the main story [Katase and Yuu's, the cutesy one] there was a little too much love and sweetness compared to plot and character development, plus the moment with the girl was all too predictable. Although I liked it enough to smile every now and then, I can't bring myself to rate it more than 6.

The second story [the stepbrothers] was cute. Not outstanding, just cute. I personally found the art style was better in this one than the others - but I'll get to that later.

I loved the premise to Aki and Keito's story [chapter 5 and 6], even if it could use some work around the edges. I love the violence, both physical and psychological, I love the jealousy-stricken seme, the vulnerable uke - it sounds cliché I know, but it really depends on how the author delivers such themes... again, what pained me was the "length" of all this. It was too short. It would've been a great story if the whole volume was dedicated to this couple.

Now the art. Oh, the art. Hanamura Ichika-sensei draws the most beautiful eyes (and hands, too). But the eyes, it's like they take over the entire page. And don't they always look like they're full of pain? Really, even when the character was supposed to be smiling, I couldn't shake that feeling that deep inside they were all hurting and miserable and in terrible pain. When I first read Kimi no Iru Sekai Shikairanai by the same artist I felt there was something odd about these eyes, but I felt mesmerised all the same. Now I love it, fufu.

So, that this is full of clichés, it's true; of a lot of quick and predictable solutions is also true; beautiful art -- check. But it's faithful to its title: it's sweet. And the third story - I repeat - is definitely worthy. 7.5 for that alone!
Was this comment useful?  Yes

Suprise Suprise the Uke says, yes!
by Nyokichan
February 28th, 2013, 1:42pm
Rating: 7.0  / 10.0
It's pretty average, but I'll give it an extra star for not having any enjoyed rape...My name for what usually happens in yaoi where the uke says no and the seme just continues and somehow that equals a love relationship. Realistically, no should mean no, but it seems in a lot of yaoi no just means the seme hasn't been forceful enough...but off the rant these stories were cute and it was refreshing to see an uke that said I want to have sex before, instead of saying no while a seme pushes them down and forces them.
Was this comment useful?  Yes

sweet!
by whitespade
October 6th, 2012, 11:18pm
Rating: 8.6  / 10.0
just like the title. their love are very sweet and adorable, very tender and loving. the art is top notch with the ukes looking absolutely fragile and innocent with those heapings of blushies. the first story can be quite a strain to some people becuase of the uke's indecisiveness and super low self esteem, but somehow I don't mind it because he just look so weak. the best story is the last one with the obsessive love, they are compatible with each other - the sadistic and the masochistic one. i think the uke is shaped by the seme from constant bullying from little, and that somehow is quite hot.
a good read!

Super
by mashimaro12345
September 20th, 2012, 11:36pm
Rating: 10.0  / 10.0
The art is really good, hard to find these type of art in manga these days.
I love the characters and the author had really developed them really well.
The characters look alike, but that's the only down point for this manga.
Hope to read more of this author's work!