Login to add items to your list, keep track of your progress, and rate series!
Description
In the skies above a world analogous to ours in World War II, a dragon flies for the first time since the age of myths, controlled by a human master to whom he owes everything. 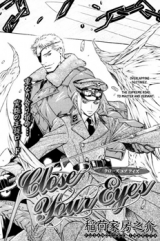 to comfort you:
by Angrierthanyou
September 6th, 2012, 7:25am
Rating: 10.0  / 10.0
First of all, I love it, there's dragons, there's war and there's shounen ai (and of course Inariya's absolutely disgustingly brilliant drawing/writing).
And for those of you who are as sad as me that its a oneshot: I THINK it's related to Code:Leviathan (another, woefully unknown one of Inariya's works) in some way (prequel? sequel? alternate story??) At least the dragoneers name is Leo-something or another and the dragon looks an awful lot like Luft. So rejoice good people! And keep worshipping at senseis altar of shounen-ai goodness!!
Was this comment useful?  Yes

Urgh.. Why did you do this to me Inariya Fusanosuke-sensei??? xD
by OmNom
July 25th, 2012, 7:24am
Rating: 10.0  / 10.0
Oh damn it!! xD
Seriously, I so hope that Inariya Fusanosuke-sensei would do something in the future, like draw a sequel to this oneshot, or continue the series, or just SOMETHING you know..! Because the premise it brings out is just too tempting to be ignored, undeniably! xD

But then again, I also kinda hope that she could produce a wider variety of genres beside these historical-themed series so as for her skills and talents to be recognized and appreciated better. I feel bad and annoyed sometimes when people often underestimate her works just because of some controversial topics that she bluntly but beautifully points out (take "Maiden rose" for example).
Was this comment useful?  Yes

too damn short !!!
by yukito-san
February 25th, 2012, 7:51pm
Rating: N/A
I freaking need so much more for this ! It's had me hooked, then it ended so quickly ( ; u ; ) I need more. I'm really hoping this is a teaser or somethin' for something bigger. I highly recommend this, but the dissapointment at the shortness might be like a ton of bricks.
Was this comment useful?  Yes

wow!
by LovelyCookie
February 3rd, 2012, 2:39pm
Rating: 8.0  / 10.0
I really can't believe this wasn't developed into a longer story! It is way too interesting for it to remain a one shot. I recommend it but I know everyone who reads it will be as disappointed as me at the shortness.
Was this comment useful?  Yes

Dang short!
by Poemi
October 28th, 2011, 6:48pm
Rating: 10.0  / 10.0
I didn't expect it to be over so fast. I wanted to see more of the background, and see the story develop. The inclusion of dragons is intriguing, especially from a yaoi standpoint. Well, more like an S&M standpoint, it seems. Why isn't there more?! (TT^TT) It wasn't from that long ago, so maybe there's hope it'll be continued?? I wish I read this before Yaoi-Con, so I could've asked Inariya-sensei myself!

Too short to satisfy
by Sleepy_Sheepy
June 29th, 2011, 12:04pm
Rating: 7.0  / 10.0
I agree with Venezia. The art was lovely, the characters and concept where interesting, but this really could have been cool if it was extended to a volume or more. I like the set up but... then it's over already.
Was this comment useful?  Yes

Interesting but underdeveloped
by venezia159
November 24th, 2009, 4:37am
Rating: N/A
This oneshot has an interesting concept, but instead of a full story, it seems like a teaser for a larger story. The mangaka does a good job of providing the reader with enough information to understand a little of what's going on, but leaves the reader with many questions and a desire to know more about the characters and the world they live in.
Was this comment useful?  Yes