Login to add items to your list, keep track of your progress, and rate series!
Description
While investigating a murder case, Detective Hishinuma Kazuha is reunited with mobster, Hyoudou Itsuki. During their junior high school days, their relationship was like oil and water; Kazuha minded his own business and Hyoudou was emotionally attached.

Hyoudou is at a bargaining point as he approaches Kazuha: he'll divulge important information about the case in exchange for Kazuha's body. Kazuha refuses such an unfathomable request, but Hyoudou, the unrestrained beast, takes control...

These two interwoven men and their superb, wild, beast-like love! 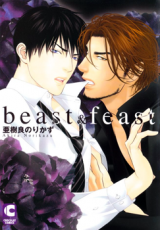 Great art and plot
by shinobipopcorn
July 1st, 2012, 9:34pm
Rating: 10.0  / 10.0
The art is fantastic and it's a great yaoi to read, especially since the two leads are grade A beefcake. Kazuha, the uke, doesn't come off as the best of policemen, though. By the end you're wondering how he even managed before hooking up with his seme. As for our yakuza seme, he's not as violent as someone like Kanou from No Money, for instance, but rather on the same level as Akira's other yakuza men.

One problem I have is that June overdid it with the translation. EVERY sign in the background is translated in a little white box, even when you don't need to know it for the story. Did we need to know the door sign says "Hishinuma"? Yes. We don't need to know that the one on the skyscraper says "able" or that the other one says "conversation school" every other page.
Was this comment useful?  Yes

Hurhur....
by Kinky-Chan
April 17th, 2012, 6:25pm
Rating: 8.5  / 10.0
Hmm....this one is quite interesting although it's not exactly Akira Norikazu's best work. I like her "Trigger" manga much better but this one is fun too! I like how Kazuha was calling Hyoudou a "lion" and looks like one. xD That's so cuteeee! But overall, it's pretty average. The cliche detective - yakuza love kinda thing. Sweet and nice.
Was this comment useful?  Yes

I thought the characters were cute (I was weirdly mesmerized by the yakuza guy's hair). I did like that neither of them was overly feminine and that Kazuha was the more serious of the two (I think giant, easy-going semes are adorable).

Don't look for any sort of deep plot, but it's nice if you want something light.

Beautiful art
by jnatsumi
November 11th, 2011, 10:32pm
Rating: N/A
The art is really beautiful.
The whole forbidden love between yakuza and police officer thing is really attractive. A bit short; I could see how the plot could be expanded, but alas; it seems that other Akira Norikazu-sensei's works are also short--but still have that very beautiful art.
I like it.
Was this comment useful?  Yes

Good
by Here_And_Now
November 6th, 2011, 1:21pm
Rating: N/A
The story was good, but I felt that there could have been more. It's a little frustrating to finish a manga and feel like only the surface of the relationship has been skimmed. The artwork was gorgeous, this mangaka's always is, and the beauty really adds to the experience. I love yakuza themed yaoi so maybe that's why I wish there was more to the story. Overall it was a good reading experience; the characters are all likeable and I only wish more would have come of this great pairing. Oh, don't be turned away by the "bondage" label under the categories, it's very minor and isn't something that should effect your choice to read this. (The label stopped me from reading this a few times and now I know it shouldn't have.)
Was this comment useful?  Yes

First of all, the art is so beautiful and easy to look at, their bodies and faces are very clearly drawn. Akira Norikazu is very talented and she really knows how to draw in the little details. (I love the way she draws male bodies)

The plot is very cute. The two main characters knew each other in high school and they reunite due to their working circumstances. It's kind of like a cat and dog relationship because they are complete opposites, which adds to the cute factor

And, the steamy scenes were hot hot hot hot!!! Wow, talk about yaoiliciounesssss

Really nice!
by streetwalker
October 21st, 2011, 3:32pm
Rating: 9.0  / 10.0
Really really good! The art is stunning as Akira Norikazu's artwork always is... I really loved some particular scenes and went back to look at some of the panels just because the art was so nice... I really loved the way both of the main characters looked. Bishies galore! Ha! The pairing was wonderful too. I love the yakuza/detective idea!

And they're a cute couple. Though Kazuha could have been a bit manlier personality-wise considering he was a detective and all... Would have liked to see more of the actual background story involving the cases but I didn't really expect to so it's not like this was a disappointment... But it's true, even the main plot involving their relationship could have been explored further. Somehow this left me a bit dissatisfied in that respect. Oh and as criticism, the eating/sex jokes get old... But all in all this was really nice and definitely worth reading!

I like xD
by Sasageru
June 6th, 2011, 3:14am
Rating: 10.0  / 10.0
Well first of all the art is stunning, its beautifully clean, characters are drawn wonderfully - the only complaint i could make, but dont really care about is the lack of detail in surroundings at times. Art aside, the characters are great x3 i love how the yakuza is always compared to a dog/lion *snicker* he looks like one too sometimes which tickles me a bit. I also love these sort of mis matched romances - i hope there are further chapters :3
Was this comment useful?  Yes

I Liked It
by astroasis
December 10th, 2010, 10:04pm
Rating: 8.0  / 10.0
I'm not a huge yaoi fan, but I'll read it if the artwork or story piques my interest. Something about this one caught my eye, so I figured I'd give it a read. I'm not sorry I did! The artwork was very nice, the sex scenes weren't too gratuitous (like I said, I'm not BIG on yaoi, so the sex scenes don't really appeal to me) and the story was cute. Both characters were likable and you really can't help rooting for them as a couple. Usually, the seme and uke are too over-the-top in their roles, but here I feel they're both a bit more realistic and any cliches presented are done in a humorous way. Overall, this is some nice yaoi here, for yaoi fans and casual yaoi readers, alike.
Was this comment useful?  Yes

This left me a bit puzzled.
by mikiwoo
November 26th, 2010, 7:30am
Rating: N/A
Gorgeous artwork, very well drawn. The plot is a bit weak. There are some holes in the story that left me a bit puzzled and how they ended one scenario very quickly even though one of them kept angsting about that scenario for too long.
Overall, it's good but I wouldn't read it again or consider this a classic.
Was this comment useful?  Yes