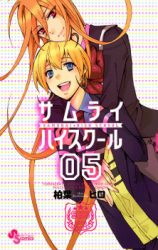 Teehee
by DismalCortex
August 20th, 2021, 8:58am
Rating: N/A
This was a fun read, with a good chance of rereadability! I wanted more honestly, but it was still worth anyone's time.
Was this comment useful?  Yes

Strange one
by Riyuri
March 4th, 2019, 1:41pm
Rating: 6.0  / 10.0
I'm not sure if I've ever read such a strange manga before. The story is interesting, but the setting... is awkward. Nonetheless it made me laugh out loud which rarely happens to me. It's comedy through and through.
I'm not sure if I should praise the characters or not. I really liked Kaya-chan since her two personalities were interesting. The twins are also cool. I hated Kamiyama at the beginning, but somehow he made it to "I don't like him" in the end. However, other characters were lacking depth. Like Kamiyama's sister. She happens to be there in one or two chapters and then she's gone again.
What I didn't like at all is the fact that the twins are always switching. I mean, come on! How can other people not notice the sudden change of height? It's too ridiculous and making the story too unrealistic
Was this comment useful?  Yes

Totally Worth the Read!!
by Dalis
October 7th, 2017, 9:26pm
Rating: N/A
This was an awesome read! At first I kept putting it off but now I regret that I kept passing up such a wonderful read and I'm now calling myself all kinds of stupid for delaying my enjoyment. The twins in this story are fabulous in their own ways and the fact that it shows that women are downplayed and Society just because men had this image of how a woman should be instead of trying to see that each person is there individual being with our own individual thoughts of what a person should be. The fact that I laugh all through this story while still enjoying the subplot of romance as well as each character makes this a top rated story in my book. The fact that it was written so great as well as it had everything that you want and this type of manga made me wish that it had more volumes. I advise you to start reading this so that you can regret it later that you've haven't found it earlier and to feel sad when it's done!!!!
Was this comment useful?  Yes

Loved It
by sarin68
November 7th, 2015, 3:36pm
Rating: 10.0  / 10.0
I've read the manga multiple times and will buy it if I ever find a physical copy. It's a quick read and not meant to be taken seriously (though anything with aliens including a shirking/growing dude and a Santa competition wouldn't be anyway).

Kamiyama starts off annoying but is a pretty cool dude, and the senpai Tsukiko crushes on pissed me off more. It's very feminist even though it's set in a world so segregated by gender that they literally test boys and girls separately at this school based on what they think boys and girls should be able to do. It deals with sexuality pretty well too, hinting at supposed BL with no one complaining besides those involved, and the supposed GL with Kou and Kaya being hinted at but not explored.

Given a 10 because the art is ugly at times (meant to be for the most part) and beautiful when it means to be. It's not very original but done wonderfully. The hints towards romance are believable and not fully explored, making for great ideas for a fanfic writer like myself. The ending is ambiguous but deserved and pretty idealistic, but really I expected nothing else.
Was this comment useful?  Yes

Not cool.....
by sinxer
October 11th, 2014, 2:58am
Rating: 7.0  / 10.0
I liked this manga and the gender swapping twins were brilliant but this is one of those manga were the end kinda ruins it for me. So rushed/axed would've love to see more or at least a few loose ends tied( preferably a few red strings tied -_-), but no what could have been really great turned into something somewhat average time filler.
Was this comment useful?  Yes

Normally you see a gender bender of either a male/female, but this one is really nice as it features both a male crossdressing as a female and vice-versa. The second one not being common enough. (Why?! It's such a good idea, LOL)

Anyway even though it was axed, I really liked it to the end.
Somewhere along the way I wanted Tsukiko to end up with Kamiyama. (Ahahaha)

Pretty good!
by Nirachu
June 17th, 2014, 6:16am
Rating: 7.5  / 10.0
I'm quite partial to genderbending manga since they attempt to deviate from the cliches and tropes associated with males and females respectively. However, the male in this shows very cliche feminine mannerisms and tropes associated with female characters (he enjoys activities like cooking, is timid, delicate and not physically strong, etc.) and likewise for the female character who exhibits all the strong, brash tropes associated with typical shounen male leads. This sort of defeated the point of having a genderbend in the first place IMO. However, despite this weakness, this manga is still a lighthearted and comedic read with an absurd yet entertaining plot at heart. I still found it quite enjoyable.

Even though it's been axed, the ending is still perfectly wrapped up by the mangaka, and there aren't any major loose ends hanging. Like other reviewers have mentioned, it doesn't feel like a conclusive sort of ending, but at least all the major conflicts and whatnot were solved, so don't let that stop you from starting this great manga.

kamiyama?
by reivatin
October 30th, 2011, 9:41am
Rating: N/A
well
he is quiet annoying char first
but near till end he made to be the main protagonist o_0

but still nice development
and yes, it's quiet rushed ending

but still the comedy after all is good

Untapped Potential
by yongzhi93
October 30th, 2011, 4:27am
Rating: 8.0  / 10.0
Probably the first thing that comes to mind when you finish reading is, "wait, it's ended?!" To be honest, the ending was so rushed it could easily have simply been the start of the next arc rather than a real conclusion to the whole story.

Nevertheless, the series showed promise throughout and engaged us with vibrant humour, not least the whole gender-swapping twins and confusion of everyone else around them. It had potential to go much further, though.
Was this comment useful?  Yes