Login to add items to your list, keep track of your progress, and rate series!
Description
Hinata Saotome is suddenly asked out by En Shinohara, a gorgeous boy in her grade. What she doesn’t know, though, is that his hobby is cross-dressing! En has always hated men, and whenever he sees his own reflection, he punches out whatever is doing the reflecting (windows, mirrors…). To combat this hatred, he dresses up as a girl. Hinata decides to go out with him anyway, despite his weird hobby.

• Sweets Honey (V.08)
Serizawa gets sick whenever she smells something sweet, but she likes a boy named Miura who has an extremely swee... More...
Hinata Saotome is suddenly asked out by En Shinohara, a gorgeous boy in her grade. What she doesn’t know, though, is that his hobby is cross-dressing! En has always hated men, and whenever he sees his own reflection, he punches out whatever is doing the reflecting (windows, mirrors…). To combat this hatred, he dresses up as a girl. Hinata decides to go out with him anyway, despite his weird hobby.

• Sweets Honey (V.08)
Serizawa gets sick whenever she smells something sweet, but she likes a boy named Miura who has an extremely sweet tooth.

• Boy's Lily (V.16)
A spin-off of Usotsuki Lily where En is a normal guy who recently started dating Hinata whose hobby is dressing like a guy.

• Amber (V.17)
Mio Hasekura is a helpful high school girl who is very fond of her late father who died when she was younger, and hopes to find a guy like him someday. On her way to school one day, she comes across a man collapsed on the side of the road and Mio helps him out. Less... 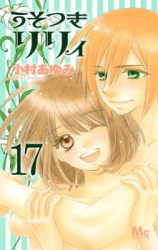 Note: You must be logged in to update information on this page.
Forum Posts Click to view the forum
Usotsuki Lily to End in 2 Weeks
over 8 years ago

the art style and the plot got me.
Was this comment useful?  Yes

my FAVORITE manga!!!!
by Maria-Ayako
August 26th, 2015, 1:09pm
Rating: 10.0  / 10.0
This is the best thing i ever read!! I was so sad that it ended >__< i love all about this manga and i like Komura-sensei too!!~ i loved her afterword!!! There is no manga like this!!
Tho there were many characters but i loved each couple!! Tho the Usolily world was weird and in a loop, i cant hate it coz it was just so great!! One yuri and one yaoi couple was there too!!
I could talk about this manga for hours

lovely art and comedy till u cry!! Romance everywhere and it gets deep sometimes too!! it has bit of everything!! Even ghosts and awesome character comments!!

Read the author commentaries!!
by hangluu
August 24th, 2015, 6:39am
Rating: N/A
She is funny as hell.. i was actually excited when a chapter end there might be commentaries!!! This manga us just fun all around.. the main plot is all over the place but that is what make it so awesome.. we get to see everyone story instead of just the main couples.. explore different types of relationships and different types of sexuality and even touch on the topic of sexuality exploration. It is progressive, funny as hell, and veryyy unique
Was this comment useful?  Yes

i enjoyed it
by lilsmally
May 18th, 2015, 1:03pm
Rating: 10.0  / 10.0
this manga was a good read for someone like me who gets to in to the drama and gets a headache from it all b/c it's to heart wrenching .So if your looking for a romance comedy without all the heavy drama and heartache , this is a manga for you. But the characters in image there are to many of them that look alike and it kinda makes you a little confused . That will be the only complaint that I have other wise i really enjoyed this manga.
Was this comment useful?  Yes

Slow decline into average-ness but still good
by kichiX
December 16th, 2014, 6:56am
Rating: 6.0  / 10.0
It's been so long since I read first 80 chapters I can't really remembered what happened in them, so this might not be a completely fair review.
I liked this series. Towards the end, the main couple were sidelined more and more as the side characters got their own plots, mainly to do with them pairing up. This was fine for a while, but I would really have preferred to have the main couple participating more in these chapters. The last arc from going to Italy and then Hinata's soul searching was less than gripping, but I read it for the sake of completing the series. It wasn't so bad, just that it came at the end of a series which was progessively getting closer and closer to average and using more and more repetitive jokes and situational comedy. What was refreshing was that even at the very end the usual shoujo cliches were parodied.
Spoiler (mouse over to view)
I did, however, feel that the sub-plot of Hinata thinking she was pregnant (and then not being pregnant), and En's reaction and behaviour to all of this (especially when he proposed that they have a child...while still in school...?), was out of tune with the rest of the manga. It was unneeded and essentially pointless, except that it conveniently finished off Hinata's soul searching episode.

Perhaps I'm being too harsh. While the ending was lacking, the first half of the manga is funny. It is more of a comedy than a romance, but the romance is more refreshing because of that and there's not great dramas to Hinata's and En's love (at least none that isn't slap-stick).
Was this comment useful?  Yes

boring
by attaesc
December 5th, 2014, 7:54pm
Rating: N/A
It was cute at first, but I couldn't tell characters apart and they treated some serious matters as a comedy, but I suppose that is to be expected in shoujo.

I couldn't tell people apart after awhile nor remember names except for Hinata and Shinohara because I couldn't become interested in the characters.
Was this comment useful?  Yes

Cute and funny but very slow
by Elfit
July 27th, 2014, 11:38am
Rating: 5.0  / 10.0
This manga started out cute and funny but lost it's luster a bit. By chapter 55 the plot is almost nonexistent and the jokes/situations get repetitive. The whole series is supposed to be tongue and cheek jokes but after a while you do what progression.
I may return to this series after a bit, I do like the art and dispite it's repetitive nature it is easy to read and enjoy. Just don't expect philosophical drama and action.
Was this comment useful?  Yes

Edit May 2014: Well it's gotten bearable again for now. But it's still nowhere near as enjoyable as it was before.

well...
by LovelyCookie
January 4th, 2014, 8:20am
Rating: 8.5  / 10.0
It was quite the story when it first started. A great unorthodox love story if I ever saw one. Slowly more and more characters where introduced, characters who joined the main cast, but that was all good, the more the merrier right? Wrong. After a while she started focusing on the many side characters more and more, making the main characters turn into pretty much extras. The mangaka herself even points this out. What this makes me think is that she has lost interest in the main characters and she's doing all she can to extend a series that should have ended many volumes ago by writing episodic chapters about her side characters.
I don't mind that the plot is all zany, I welcome it, and I have both cried and laughed with this series, but what I don't appreciate is the direction or lack thereof that this manga is taking. I don't see an ending in sight and sadly that's all I still want from this manga.
I still recommend this highly if you're in the mood for a laugh, although lately even the jokes have lost their edge, so maybe read the first volumes and then drop it when you start to get bored because it doesn't get any better, really.

-This is primarily an episodic, gag-based rom-com. Includes a TON of fourth-wall-breaking.
-The main couple become bf/gf right away, so there's no waiting as far as that's concerned.
-There's a very wide cast of characters; we spend a lot of time on the secondary characters.
-The male lead dresses like a girl because he loves females and hates males. Other characters of both genders crossdress frequently. There are bonafide gay, lesbian, and bisexual characters as well.
-I'll re-emphasize, this is mostly gag. There's occasional serious moments (like when the girl is trying to get her dad to accept her boyfriend's odd habits) but don't read it for those.

In sum: This series is perfect if you want constant goofball hilarity without a whole lot of depth, and with a ton of characters that dance all over the gender spectrum. And since I do enjoy that, I find it a pleasure.