Login to add items to your list, keep track of your progress, and rate series!
Description
The "prison survival action" story is set after the sudden emergence of special powers in certain pockets of humanity. To deal with these so-called "Altered," a mysterious remote island prison named "Area D" was built. 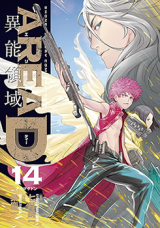 Note: You must be logged in to update information on this page.
Forum Posts Click to view the forum
Area D Ends
over 7 years ago

Read up until the time skip
by Fizypop
August 17th, 2017, 9:38pm
Rating: N/A
The first 100 chapters are engaging and display growth for several characters in a pretty basic manner (weak to strong, learning to trust others, etc.). The conflict among those with powers is pretty X-Men esque but it becomes a little less predictable by the time of the "island war" arc. From there things become like a Jojo arc but more straight forward and not as camp with its their battles.

What I like about this series is that the protag actually thinks. The side characters are a bit cookie cutter but endearing in their loyalty towards the protag despite their own goals.

Art is phenomenal and battles are fun.
Was this comment useful?  Yes

What a hack...
by Sakiza
January 30th, 2016, 11:45am
Rating: N/A
It had so much promise...in the first several pages. Until they switched from the interesting character to Mr OP-hack and then the story collapsed into a maze of a mess.
On one hand, you sometimes get good plot unraveling and character development in manga...and then there's other times you're just baited in and set up for major disappointment: MC overhaul, sob story sudden heel turn, over inflation and under use of characters, and a plot that has no idea where the hell it wants to go except downhill...Thus, it was dropped like a hot potato.
Let's just say I wish Saitama would one-punch the crap out of all this shallow shounen-clichedness.

At first, i totally thought it's the guy who has this power of disassembling anything he touches in a second. i mean, who wouldn't? The story started with his POV after all. And his ability's so badass that it could srsly turn in to something so awesome.

But then come this OP guy who has a great ability but totally soo cliched =_= ... At first, (again) i thought he's one of those side charas that's also powerful but still gives way to the MC. Then he starts getting all the lime light and the MC (i thought) fades away on the background =_="...

Edit : they should have totally went for the disassembling guy. This would be so much cooler if it's that way. (Don't know what would happen on the following chapters but am deciding to drop this one for now -w-)

Good arts decent story line
by Akatsubaki
August 2nd, 2015, 7:33pm
Rating: N/A
Story is okay, not too impressive, but still enjoyable. Drawing is done very well. I prefer the story to stay with the first character introduced, developed him more since he has potential to be a hero. But he was cast aside to be a support character of the almighty hero. All the hype they have for the hero is a bit overwhelming for me.
So far, I'm not fond of the time skip: change in the story and characters. With just a short period of time skip, i felt like missing a lot of things in the story. I'll wait for a while to see how the story progress for this series.
Was this comment useful?  Yes

Really enjoyed this
by darkmanifest
May 17th, 2015, 6:05pm
Rating: 9.0  / 10.0
Have read every chapter available up until now, and it's a great manga, with gorgeous art (only to be expected from the same artist who did Shin Angyo Onshi, another fantastic manwha), likeable characters, and a compelling story. The hero (who is not who you think it will be after the first few chapters) initially seems like your typical shounen guy who wins based solely on power, luck, and determination, but this guy has an actual brain to go with all of that, and he uses it frequently in combat, which is really well drawn and entertaining. The superpowers presented are surprisingly original - you'll see some stuff here the X-Men actually didn't do first - and the plot stays consistent, interesting, and moves along at a brisk clip. Just about every character has their moment in the spotlight, and there's a strong element of nakama going on here, you know, the power of companionship and changing people's hearts, which I very much enjoy; very few characters here I didn't eventually come to like and sympathize with. There's a healthy dollop of scantily clad chicks and a few ecchi moments, but nothing gross, and no romance.

Only reason it doesn't get a 10 is because it's not done yet, I'm not terribly happy with the turn the story's taken as of the latest release, and even the best manga can still go to hell before the end, but I'm hoping this'll be different. Highly recommended.
Was this comment useful?  Yes

Spoiler (mouse over to view)
The original character is introduced with the ability to break down anything non-living into it's components. Let that sink in for a second... There's so much that you could do with this ability.


In 64 chapters, though, he has disabled a bomb (that he walked up to and touched) and collapsed a building...

Uh, how the
by SOSAnimeBoy
November 26th, 2013, 9:15am
Rating: 6.0  / 10.0
heck is the storyline in this manga beginning to go the same direction as Defense Devil (manga by the same artist but different author)? What I mean is, both mangas started the same way, with an interesting storyline and then suddenly got foot-in-mouth disease.

This could have turned out better
by TundraDweller
November 4th, 2013, 1:06am
Rating: 6.0  / 10.0
In the beginning this manga showed great promise. The art was first class. The story seemed like it might be great too. The characters were kinda meh even back then. The MC, or who I and everyone thought was the MC, had an interesting ability and seemed like he could be developed wonderfully as well as the story progressed.

Spoiler (mouse over to view)
Chapter 57 now, the MC turned out to be another tall long-white-haired guy who has a unique and powerful ability. Plus, the girls all get the feels after encountering him. He wows everyone. The kid we thought was the MC? I don't even remember where he is now. Srsly. He faded into the background as soon as he had fulfilled his role of giving the reader an idea of what an altered could face. And it turns out he isn't even representative of most altered.

After 57 chapters, the art continues to be awesome. The story has gone down a steep hill. The characters are marginally better. Area D is not an interesting manga at all anymore. <--- My opinion.

Area D is an alright story. It got very good art but the story lacks. The plot isn't very fresh as it's almost like a rip off deadman wonderland just like the reviewers below me had stated. But what's even worse is the characters themselves. Their personality and actions are very superficial, and only serve to move the plot and have no really relate-able reasons behind them. It seems like they don't have a mind of their own; they only do what's necessary to keep the story alive. And there's the crap about friendship, I dont mind being lectured about friendship, but not to this extend, which kills the appeal for this manga to me.
Sooooo, if you are a person who doesn't mind the superficial character combine with a somewhat horrible plot, you might just enjoy this story.
Was this comment useful?  Yes