Note: Was nominated for the 6th Manga Taishou in 2013. 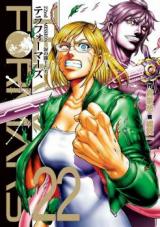 it's alright
by fiqipraramadhan
June 6th, 2020, 4:07pm
Rating: 6.0  / 10.0
i've read to vol. 22, it starts off great but after 4-7 volumes, the adventure's getting boring and weirder, i definitely like the explanation of the character powers and background stories but the later characters development and involvement in its complex story is not that interesting besides the fighting bits
Was this comment useful?  Yes

Should be called "chronicles of the eternal losers"
by yami_guy99
October 31st, 2018, 5:09am
Rating: N/A
I've read up to around 60 chapters in, and all I'm seeing is the main heroes getting small wins and getting dominated overall by the roaches, I'm sick of seeing the humans lose so much, and I'm sick of seeing the terraformars get better and better and more indestructable, at least have them do well for a little bit before more powerful bugs appear, it's just depressing. The action and character are cool but it's just not for me, it feels like I've wasted a lot of time on something that I expected great things from.
Was this comment useful?  Yes

Futuristic Attack on Titan
by taichokage
June 28th, 2015, 11:06am
Rating: 8.5  / 10.0
The initial premise is extremely similar. Mankind is threatened by a monstrous race more powerful than themselves but fortunately less developed at the same time. However the hyper-developmental rate of the species in question is their most dangerous aspect. The protagonists enhance themselves to take on these menaces and take the battle to their world, that being Mars. I believe those that are fans of Attack on Titan will enjoy Terra Formars. On a personal level, I enjoy it more, but I'll leave that to my fellow readers to decide, A solid 8.5 for me. The sense of danger is NEVER absent and while some characters appear to have the slightest bit of plot armor, do not think that anyone is above death in this series.
Was this comment useful?  Yes

The "successor" to Gantz
by residentgrigo
May 7th, 2015, 4:34am
Rating: 7.5  / 10.0
Gantz (8/10) may have been a bit problematic but it left a void in the market which Terra Formars so i jumped on board early on and immediately jumped off due to the messy introduction arc. The series stuck with me though and i heard that the manga was up for an award, an anime (it´s alright but a bit rushed and kind of strange) and now a movie. I then decided to travel to Mars again and the second arc in Vol. 2 turned out to be an improvement on Vol.1 (the OVA) but it and the prequel chapter about the first mission are still essential reading as they form the backbone of the narrative, Don´t skip them even if both could used a rewrite. My appreciation then grew volume by volume.
An immediately noticeable strength is the clean and dynamic art by Kenichi Tachibana and his action scenes become better and better over time with the expansion of the highly varied cast. The animal metaphors and explanations, which relate to the powers employed, are all very interesting and the series is racially diverse to a degree that most Japanese publications don´t even strive too. I am a Afro-Russian German btw. Another noteworthy strength are the female characters (50% of the cast) and the way the author treats them. There is nudity but it is tasteful and the manga goes for male one too by skipping easy setups for "fan-service" time and time again.
Some of the women could use a slimmer breast size and the constant and highly interesting profiles mention every cup sizes but half of these are (good) jokes and some of the males get a few curios entries too, as their opinions on certain porn genres. I thus i have no problem to call Terra Formars weirdly feministic. Fellow competitors as Hiroya Oku should take notes! Especially in the way this series handles death as you never know who will die.
All the deaths stick so this is truly series for adults and not a Shounen power trip as way too popular Seinen manga are. The use of violence is also well done as the author understands where to go big and where to go small by focusing on reaction shots of onlookers instead. The driving force of the narrative is actually a string of romances but damsels in distress won´t be found here. That cliché even gets inverted at time and the series even has a funny bone. I am never going to call any of this high art and i get some of the criticism but if you want to read a straightforward biopunk survival tale that is way better than it should be then stick around and just power though the early slumps. The mass of comedy spin-offs is utterly unneeded but Terra Formars Gaiden - Rain Hard (7,5/10), about the tragic back story of ensemble dark horse Adolf, is quite good and more serious in-continuity side-stories could work. A current and even better teamwork focused manga would be Until Death Do Us Part (9,5/10) which excels with its gender balanced cast and racial diversity even more. Attack on Titan (8/10), Black Lagoon (8/10 but the anime is a bit better), Gunslinger Girl (9/10) and Tokyo Ghoul (8,5/10) are further quality action tales that can deliver characterization along with the violence. I can´t believe i am saying this but in the Nippon Bug i trust!

Too many flaws to be a good read
by Akatsubaki
April 5th, 2015, 11:22pm
Rating: N/A
When i saw the cover and summary, my first thought that it seemed interesting. But in the end, it's not working for me. I think the most important thing to create a succesful story on whichever form media the author choose is to be able to captivate readers to its characters, plotline, and the world inside the story. Some said there are too many characters only appear to die. Some said the story is confusing with too many characters. Some just can't accept cockroach. But the biggest flaw in this manga for me, is the theme "Science"-fiction. At least put some science basis in it? Be it a fantasy, you still want to make the story convincing to the readers. In some aspects, the reasoning just goes *bara bara* (sfx for crumbling).

Let's say Cockroach did evolve in Mars (which the process of evolution took relatively short here), how can it evolve and took a form of Humanoid? The closest cockroach has similarity with homo sapiens is they both are living things. It is Insect to begin with. Three pairs of legs, three body-parts; head, abdomen, thorax, facet eyes, antenna, etc. ...And we are mammals.
Up to the point where it could speak human-language and using a cellphone, i decided to stop.
What the..?
Was this comment useful?  Yes

Too many characters and many look the same. Some are only introduced and mentioned just before they get killed. Never seen them before and wham, they be dead. My beloved Sasha was one of them. Who is Sasha, you ask; you tell me. She died in Volume 8 Chapter 71. She is the trapped door spider. Asimov tricked her into getting herself killed. Not a spoiler because my beloved is a nobody. A worse incident, there were people that are in a tiny space whom you don't know of their existence and dialogue occurring in this space is spread over several pages only when they get attacked in the tiny space suddenly all the other "invisible" characters appear in a panel or two so you can see them getting killed.

There is no plot, however it makes up for it with absurdities. The dialogues are all over the place and confusing. Should have been released as a picture book without dialogue, might have been an improvement.

Art: The bugs all look alike. So do the humans. Art is so and so. I would say good but damn story line makes it bad.

One time entertainment
by FormX
September 21st, 2014, 2:27am
Rating: N/A
If you are educated on biology then all logic of sorts disappears, otherwise this is a decent read on fighting unknown terrors. So you can ignore what I'm saying if you don't care about that.
While there are some trivia about some interesting organisms the author researched, he doesn't really apply animal structure, physiology, bio mechanics or biological scaling to his designs. For example, a cockroach would never ever develop those muscles because their hard exoskeleton requires striated muscles. A common mistake in fiction and also greatly used here is the scaling animal abilities to the human level proportionally, as mainly physical limitations prevent that.

Another ignorable (for most of you) but typical issue is that once again China ends up being the villain, with all other internationals allying together for the sake of humanity.

Again, if what bugged me doesn't matter to you, enjoy.

Can't decide
by SOSAnimeBoy
March 26th, 2014, 2:15pm
Rating: N/A
I really cannot figure out if I like this manga or not. Most comments have already captured the pros and cons about it, so I'll just focus on my opinion.

Most important negative point: I think the design of the enemy makes it impossible for me to feel intimidated by them, therefore taking away a bit of the seriousness of the manga for me. I mean, seriously, if you did not ROFL at least once looking at those humanoid roaches, then something may be wrong with you (haha, kidding). It's like a crude parody of blackface.

The other issue is the character design. The storyline keeps jumping back and forth between different scenes, and I was often finding myself confused as to which character was which when they are not shown in their 'transformed' state.

In regards to the wanton death, in Gantz when important characters died, later on in the story there was at least a mention or revisiting of their existence, which helped cement the role they played, however short it was. In this manga, seemingly important characters die and then are quickly forgotten about. It makes me feel like the author is just having fun introducing character designs to showcase different mutation possibilities, and doesn't really care about the characters.

For me, honestly speaking, the one thing that keeps me reading is to see what other creature mutations he comes up with, and the creature intro panels. Other than that, not much really.
Was this comment useful?  Yes

surprisingly good
by mokaboy
February 24th, 2014, 10:05pm
Rating: 8.0  / 10.0
Now I can see why theses series is selling like candy back in Japan.
I was sceptical at first with all the sudden deaths, and pointless gore but it went better .
I highly recommend that you read at least 3 or 4 volumes before making any statement.
Was this comment useful?  Yes

Pretty Awesome So Far
by pandasamurai
January 18th, 2014, 3:24pm
Rating: 9.8  / 10.0
The story is brilliant, has a lot of qualities you might remember from Gantz (like epic gore and random character deaths). The author has made such despairing tale that hooks readers with new twists each scene. Can't wait to see what turns the story will make in the next volume.
Was this comment useful?  Yes