Login to add items to your list, keep track of your progress, and rate series!
Description
From Eternal Blue:
Basically, this manga follows Hibino Hareluya as he tries to "conquer the world" by dealing with the everyday punks on the street. Always ready to fight and always winning his fights, he just finds himself in more and more trouble. Along the way he surrounds himself with friends who are all very strong in their own unique way. 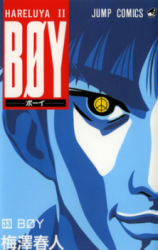 What a great series.
by MondSemmel
May 12th, 2015, 4:14am
Rating: 8.5  / 10.0
This is what the delinquent manga Crow should have been. Crow's protagonist is similarly invincible, but wins for stupid reasons; Hibino wins because he's strong, yes, but also because he pulls smart moves.

Not to mention that there's great humour, story arcs don't last too long for no reason, even side characters get tons of moments to shine, et cetera. That point bears repeating: in contrast to most shounen stories, here the protagonist doesn't save the day by himself. Yes, he's usually the one to win the crucial fights, but he isn't the only one that looks cool in the end.

Incidentally, one of my favorite scenes is chapter 204. It's a great example of a shounen character being absolutely *awesome* without having any supernatural powers or relying on a signature move.

I think it must be almost the only manga I've read where the lead is basically a God from day one, and stays this way till the end. I mean, not one of his opponent came even close to his level of badass power. Some of them managed to make him relatively mad, but they ended up wiping the floor soon enough.

Plus, there are repeated comments about Hibino being an idiot throughout the series, but I actually thought he was one of the few really smart male lead I've seen in such a fighting manga. Sure, he is a devil-may-care airhead, but he is actually not dumb, nor naive. He is able to see through his enemies' plots, and to use his skills as well as the circumstances in a very clever way when he fights. For instance : Trapping the Blue-oni in the elevator (closed space), or using the nails on the 'armor' of the 'crucifier' dude to plant him on the wall and immobilize him, or scattering broken glass to limit his opponent's movements in the 'millions' arc... Or even the use of a net to get rid of the huge crowd of enemies at the very beginning, instead of friggin taking one after the other and tire himself like some dumbass so-called 'fairplay' protagonist probably would.

Too often I see shounen protagonists saying "I'm not gonna play dirty against my opponent, I'm gonna win with my own power, fairly, even if he is a cheating evil MF, blah, blah"... -_-' dumbass, get a f*cking clue ! As opposed to those dumbasses, Hibino is both insanely strong AND smart/resourceful/disillusioned or whatever, genre savvy in a nutshell, which means he uses everything he is able to in order to win AND THAT'S THE WAY IT SHOULD BE. Such not-so-f*cking-innocent protagonists are so refreshing, imo...
Of course, there is some kinda cheesy (or 'pure' to put it gently) morals in this (it's shounen after all), but in a good way. These guys (and girls) have typical 'good guys' values and typical 'good guys' views on the world, BUT, if these are optimistic, they are definitely NOT naive nor blind to a certain reality of the world (which is really really not typical for such a shounen). Especially Hibino, he's really far from naive, and he's NOT all noble/understanding with the evil guys, which is, again, very refreshing.

FRIGGIN SMART, STRONG AS HELL and confident, no annoying noble views about evil jerks, but standing for his values, and for his friends = I friggin LOVE this kind of male leads (And they are few in shounen. Hibino and then Onizuka, Gintoki, Spike, Kamina, maybe the guys in Drrr and Baccano! to some extent... and that's about it?)
I swear if the author decides one day to do the friggin sequel, then he is a hero among men.

In the meantime, all hail "ore-sama", one of the best BAMF ever !

Good in short bursts
by Artimidorus
July 5th, 2010, 7:16pm
Rating: 6.0  / 10.0
It is good to read once every few weeks, but otherwise it is pretty bland.
The story: Invincible young man who goes around doing good deeds while trying to show it as selfish wants. Nobody can beat him, he just pulls out skill whenever he needs it, including beating huge drugged up guys who feel no pain and are on super-steroids. It really does get pretty boring, nothing ever really happens, because nothing -can- happen.

It isn't horrible, but I certainly can't think of any reason to actually read this more than VERY rarely, as I know that no matter what chapter I pick up, the "story" will be exactly what I know it will be, and nothing will ever actually have happened to make me wonder what went on in past chapters.
Was this comment useful?  Yes

What's really nice is that individual fights usually don't take more than a chapter each, though there are a lot of fights. And when fights end, the loser doesn't get recycled. Naruto and Bleach could learn from this...
Was this comment useful?  Yes

The main characters are shown to be both selfless and cunning, in spite of their opposite behaviors and boasts a lot of humors and great fighting scenes. Also, despite some simple drawing styles, it fits very well with this manga.

Overall, Hareluya II Boy is an amazing manga worth anyone's time.
Was this comment useful?  Yes

cracktastic
by raphiq
July 29th, 2008, 1:38am
Rating: 10.0  / 10.0
I LOVED this series. It's pretty old, I remember reading this when I was in fourth grade years ago. This is your usual shounen story about a delinquent boy who loves to fight and eats miso ramen. The comedy in this series will make anyone laugh, and overall, Hareluya II is a great entertaining read.
Was this comment useful?  Yes