Login to add items to your list, keep track of your progress, and rate series!
Description
1-8) No.99: Ningen Omocha
The Marquis Banford and his wife die in tragic circumstances leaving Graham, their butler, with the heavy burden of raising their sole heir, Leonard. Leonard is young and Graham chooses to raise him in a selfish and unrestrained manner. Anything he wishes, his butler will grant. One day Graham returns to the castle with another rare toy for his master. The 99th toy to be presented to Leonard. A human toy.

2) Ougon Shima (The Golden Island)
On an island where young boys are building a wing for a giant eagle, two boys deal with their feelings for each other.

3) Ou to Ma... More...
1-8) No.99: Ningen Omocha
The Marquis Banford and his wife die in tragic circumstances leaving Graham, their butler, with the heavy burden of raising their sole heir, Leonard. Leonard is young and Graham chooses to raise him in a selfish and unrestrained manner. Anything he wishes, his butler will grant. One day Graham returns to the castle with another rare toy for his master. The 99th toy to be presented to Leonard. A human toy.

2) Ougon Shima (The Golden Island)
On an island where young boys are building a wing for a giant eagle, two boys deal with their feelings for each other.

3) Ou to Majin to Mahoutsukai (The Prince, the Devil and the Wizard)
Long ago, in a country called Arabia, a beautiful young man stole a mirror from a magician. There is a catch, however; this mirror possesses the power of the devil and whoever holds it will face a life of misery. What will happen when a young magician tries to steal the mirror back?

Associated Names
No.99: Human Toy
No.99: 人間玩具
No.99:人间玩具
Ou to Majin to Mahoutsukai
The Golden Island
The Prince, the Devil and the Wizard 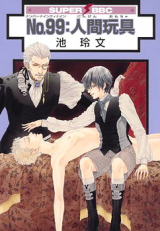 WHERE ARE THE OTHERS D:
by Lilyvee
September 14th, 2014, 8:12am
Rating: N/A
According to this, there are 4.5 more stories left untranslated.

I can't read chinese but the stories were:
1. It's about three people living in one apartment: one chubby, chibi, (kawaii?)/shota boy and one ikemen/handsome dude and one bishoujo girl. Apparently, shota boy doesn't speak and ikemen man has strangely taken a fancy to him. The girl just serves as the obstacle in their romance (like most girls in yaoi manga). A shounen-ai chapter, only kissing.

2. A (really) short story about two men. No, I did not decipher anything from the weak plot. Shounen-ai.

3. About this one typical boy who, apparently, has magical powers to arouse anyone, male or female. I guess he's not typical anymore. Anyway, he meets this ikemen with long hair and he seems to not be affected by this power. In the end, they... GET IT ON, but the once-typical-but-not-anymore dude thinks long-haired ikemen fell for him cause of his powers but it is shown that long-haired ikemen isn't and at the last panels of the manga, he removes the powers from him(?)

4.5 An extra story about Leonard cutting Graham's beard off.
Was this comment useful?  Yes

Great.
by F0rcefi3ld
July 25th, 2014, 9:21pm
Rating: 8.0  / 10.0
There was nothing wrong with 2, but my favorites were 1 and 3. I love the settings and all the emotions that pour out from each story. The plots are very simple, but it's the characters and what they represent to each other that makes the stories so beautiful.
Was this comment useful?  Yes

The style reminded me of
by supmaguire
October 12th, 2012, 3:35pm
Rating: N/A
Hoshino Lily a little bit--but only in the real cool patterns and character designs that Ike uses. I like Ike's work better when it comes to yaoi because the guys look more like guys. I love Hoshino Lily, but her ukes always always ALWAYS look like girls. But both of these mangaka have really creative streaks in their work and are not afraid to think outside the box in terms of story plot.
Was this comment useful?  Yes

really interesting.
by otakuness
December 22nd, 2011, 8:33am
Rating: N/A
and welll those sex scenes were just... i lack words. the art was gorgeous. and the stories were alright i guess

no.99 nigen omocha was told from a third person point of view and it was really detail- ish. and it kindda reminded me of kuroshitsuji. and i find the chacters kindda pedoish but whatever.

the second was also.. well. golden island seemed like a juvenile homo love story and i loved the uke. but whatever he went with the abuse so.. yeah. not the best.

the third was really cute.. all was good but why does he have to go and rape him?? i mean. but whatever!
Was this comment useful?  Yes

Not Into It
by SnowDove
July 5th, 2011, 7:04am
Rating: 6.0  / 10.0
I love most of Ike's works, most especially her art, & finally came to read this one.
I thought the last oneshot, the one with the magic mirror was pretty cute, but the other two I didn't like so much. I'm not into dark & disturbing elements.
But as always, great art.

But I give it a 6 overall.
Was this comment useful?  Yes

interesting.
by chocoripeyes
April 3rd, 2011, 6:27pm
Rating: 9.0  / 10.0
No.99: Ningen Omocha : this is a bit different. yes, the first sexual act was forced but if you read the story carefully, you will see that Nine (Fin) had a likeliness towards Leonard (the difference in how Nine treats Leonard versus the Butler). It's interesting because this is told from a 3rd person view, an outsider.

It wouldn't have gotten such a high rating from me if the story telling was any different. I liked this oneshot. It would've worked if it was longer but it's okay as is.

From the ending and the expressions of the Butler and how the Butler was adamant on purchasing Nine, it is heavily implied that the Butler has taken a liking to Nine. Nine x Leonard's initial attractions may have originally stemmed from loneliness, but the whole point is, it goes deeper than that because they have aged at the end and they are still together (cause if you read the beginning, Leonard gets bored of everything brought to him but he hasn't gotten bored of Nine)

Ougon Shima (The Golden Island) : This is interesting too. Continued great storytelling which makes this story rather nice and unique. Love the symbolisms.

Kind of confusing, but still good.
by Yenoh
October 15th, 2010, 4:38pm
Rating: N/A
Well, first off...I really, really like the art. Especially the details on the butler's outfit. The story is a bit confusing and I feel that it's a bit rushed, but nonetheless it was a good quick read.

Btw,
Spoiler (highlight to view)
The story's told by the butler's point of view because he wanted the "toy", right? He DID say that he wished he brought the guy (I don't remember his name) to his room instead of his master's at the end
right?
Was this comment useful?  Yes

I was just simply dissapointed
by Hoshi-chan
September 13th, 2010, 11:18am
Rating: 5.0  / 10.0
Maybe I was looking for someting different at the moment (romantic story maybe), but while reading I was like WTF! And yet after rape done to "toy" in the presence of the butler holding his arms - it turned into kind of 'agreement' due to young master sad story and loneliness.. Come on.. Maybe it was too short and lack of story development, anyway not convincing and totaly not my taste..
I rate 5/10 and this is only due to last page - kind of appreciation of the idea for pawky ending..
Was this comment useful?  Yes

loved it
by larosh
June 28th, 2009, 8:44pm
Rating: 9.0  / 10.0
Yes, a very interesting oneshot indeed. I loved the art and loved the story, especially the story. I think it's extremely satisfying - dark, a bit disturbing, dramatic. And it ends in an unexpected way too. I mean, all the while I've been thinking one thing but it turned out to be very wrong.
The lenght is perfect from my point of view too. What else is there to say?
Was this comment useful?  Yes