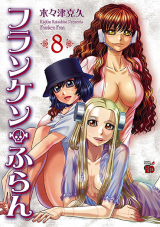 Note: You must be logged in to update information on this page.
Forum Posts Click to view the forum
Your feelings on the ending?
over 10 years ago
Do you let Fran operate on you???
over 11 years ago

Morbidly Hilarious
by ayaneninja
October 19th, 2020, 6:15pm
Rating: 10.0  / 10.0
Franken Fran is one of those manga that will have you in stitches laughing. The main character Fran is a riot, and her attitude in how she approaches all of these requests thrust upon her, as well as the end result of such, are nothing short of hilarious. The gory, gross-out meets dark comedy is a unique approach to a comedic manga, and while it might not be for everyone, the people that it will be a hit with, it will REALLY be a hit with.

The art is very well done, and some of the Frankenstein-like creations Fran ends up creating at the request of her clients are morbidly gorgeous. The personalities of Fran and her small team of misfits she has created, and the interactions between them and her clients are always sure to get a laugh out of the reader. To wrap this up, Franken Fran takes the concept of "be careful what you wish for" to comedic extremes, and executes it flawlessly.

Don't judge by cover
by Avelys
July 15th, 2015, 2:51am
Rating: 9.0  / 10.0
The characters are presented much sexier on the cover than in the actual manga. The manga itself is beautifully grotesque and deliciously macabre. With the exception of the Sentinel chapters, all of the individual chapters are good. As for the art, a lot of uncanny valley in this one.
Was this comment useful?  Yes

One of the few true seinen mangas
by manhunt0r
November 4th, 2013, 10:20pm
Rating: N/A
Among the best and few true {in my definition} seinen titles. Good art. Not the best ending, but very far from the worst.

The author struggled a bit with the direction she wanted to take this in, but overall it is still a great read, and while i cant speak for any sort of medical technicalities, the behaviour / motivations / actions taken.by any character featured never were facepalm worthy - which is a lot more than what most japanese fiction writers known to me can achieve.
Was this comment useful?  Yes

One of a kind
by willmcgowan85
July 12th, 2013, 10:15pm
Rating: 8.5  / 10.0
This reminds me of The Twilight Zone. Most of the chapters are completely independent with the exception of a few reoccurring characters
Spoiler (mouse over to view)
The Sentinel guys, Kohou the police woman, Adorea the organ storage woman
Category Ratings:

Good, with some bad.
by kichiX
September 12th, 2012, 7:30am
Rating: 7.0  / 10.0
There is so much on each page! This is one of the first things I noticed while reading the manga. For each twenty-four page chapter, a more "normal" mangaka would need to use at least two, maybe three, chapters to get across what this mangaka does in a chapter. Several times I had to check that I was still reading the same chapter - was this really all in 24 pages?
I didn't really find this series to be horror-filled or gory, though most people would. Some of the ideas made me a little uncomfortable or freaked out though. I did find, as others have mentioned, that after the first four volumes the series started to become repetitive and recycled the same ideas. The whole "Justice I", "Justice II", "Vengence I", "Vengence II" (and "Justice III") confused me, although I think that was mainly because the manga kept coming back to them after 10-15 chapters and I'd kind of forgotten what they looked like (without the masks I mean).
Was this comment useful?  Yes

Definitely one of the best
by Suxinn
July 6th, 2012, 10:19pm
Rating: 9.7  / 10.0
Franken Fran is possibly one of the best mangas I have ever read, if only for the psychological and societal implications that it brings into focus.

Rather than a horror or gore manga, Franken Fran is, first and foremost, a satire, a harsh criticism on human society. For instance...

Spoiler (mouse over to view)
In one episode, Fran meets a girl whose beloved dog got run over by a car. In her goodwill, she saves the dog... by putting its brain into the body of an fat and ugly man. Through the course of the story, the girl, at first abhorrent of her new dog's appearance, eventually grows to accept the dog despite its appearances.

Now, I'm sure all of us have heard the words, "Don't judge a book by its cover," but, really, how many of us follow it? What is most important to the aforementioned story is the reactions of the readers. I, for one, felt enormously uncomfortable the entire chapter, even after the girl accepted the "dog". I just could not help myself from feeling squeamish and disgusted. And, that is precisely Kigitsu's point: we all judge people by appearances, that is human nature. People who do not are outside of the norm.

Finally, in the same chapter, after the dog dies in (what should have been) a heart-rending scene, a Hollywood movie is made of the story. The fat man is replaced with a handsome, youthful guy, and the movie ends with the the girl and the "dog" having sex. Bestiality? Maybe. Commercialism? Definitely. And, again, a point at appearances: something gross doesn't seem quite as gross if it's done by someone hot.

And so, one of the biggest reason I love Kigitsu, and I love Franken Fran, is that there is simply so much to analyze in every chapter. There's always some little subversion or aversion of traditional morals, and there's so many different ways to dissect these themes.
Was this comment useful?  Yes

incredibly funny and gory
by whitespade
June 16th, 2012, 3:41am
Rating: 9.4  / 10.0
this is actually a very funny manga with blood and maggots to make it a more trippy experience. i found fran's ditzy reaction to all that happen is hilarious. she's like a more dangerous version of a bubbly blonde because she honestly think she is doing good. i love the kernel of science that is then wrapped by layers and layers of horror that the story became more interesting. and more often than not there is a kind of moral that i can understand and appreciate, however twisted it became.
most of the stories can be read as a stand -alone but some have their own arc and all of them are in the franken fran narrative, so this can be drop and pick up anywhere you want. i really recommend this to any lover of horror and comedy.
Was this comment useful?  Yes

Many of topics are reminiscent of Horror movies, and with the quick pace, it feels like a B-movie especially.

Again with the quickness gives the gore an over the top feel. Like the 80s Blob or the Thing.

It has a pretty cynical sense of humour. It might come off as depressive if you let it, so don't.
Was this comment useful?  Yes

I'm not gonna lie, I felt very disturbed reading certain parts of the Manga, (feeling like mentally puking sometimes, yes butterfly-girl at the very beginning, I'm thinking of you.) I sometimes felt the urge to go & read some really dumb and cliché shoujo (which I usually hate) after reading, because sometimes you just need flowers & sparkles & pink scenery. XD

But, well, definitely a must-read imo. I don't rate Mangas, but I would give 10 to Franken-Fran (to the beginning of Franken-Fran, actually) because in its own weird category, it's a masterpiece.
Was this comment useful?  Yes

Personally, it's NOT the gore that made me dislike this manga, it's the utter lack of plot and character development. Fran just continues to be an ignorant little girl who learns nothing of human behaviour. She continues to destroy everything around, while sticking to her stubborn belief that she's "helping humanity by improving science". She just struts around doing whatever she likes completely oblivious to the damage she's done. Learning nothing from her mistakes. At the end of almost every chapter, she skips away from her mess with a "Oh well, I guess that didn't work."

It would've been a good manga if she gradually starts to understand human nature and learn that you can't just f*** around with people's lives (and deaths). Sometimes the characters who seek her for help deserve the horrific treatment she provides, but she provides the same treatment to EVERYONE. It's not like she's purposefully trying to help. She just does what she wants and if by chance it works, then it's counted as a "happy ending" for the chapter.

The only thing good about this manga is the creativity of the author. He manages to come up with increasingly more disturbing "science experiments" But other than that, there is no substance. I'm never reading this ever again. If I wanted to see gore, I'd read Gantz.