Login to add items to your list, keep track of your progress, and rate series!
Description
From Echochi:

Blockheads Kasukabe and Misato are always quarreling over everything. But one day, Kasukabe finds himself helping Misato to escape from a bunch of fangirls. Alone in the classroom. Kasukabe starts taunting and teasing his arch enemy. But somehow, things start taking a turn towards a completely unexpected direction… 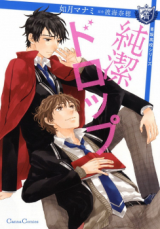 Erotic and cute so yes please!
by Gattaca88
September 3rd, 2015, 5:21pm
Rating: 10.0  / 10.0
An enjoyable read about two really cute guys who are hot for each other but still can't seem to get along....a very fun read. They basically have no idea what they are doing but one thing is clear, there is electricity between them. Their first kiss was so sexy, I was bleeding from the nose. I found their progress to be realistic and had a good pace. There was a plot, ups and downs of two young and inexperienced guys falling for each other in a hopeless place where there is competition and pride involved. Highly recommend it.

Plotless
by haruny
May 28th, 2015, 7:13am
Rating: 2.0  / 10.0
Man, I love yaoi, srsly I love it, but what is this?? I don't get it, the uke must be a TOTAL MASOCHIST to act like that and humiliate himself to such extent.
This manga is just about two teenagers being SUPER horny for each other, I can't. Every chapter is about them doing it OTL.
The art is cute, but I couldn't even read the second chapter without going "wtf?".
This is just not my kind of manga, I guess. If you're going for a plotless yaoi then this is for you, don't expect anything else.
Was this comment useful?  Yes

A lot of awesome voyeurism. I love it. The two of them are so cute, going at it like rabbits. (No, seriously.) And finally we have a seme that isn't dark, deep, tall(er) and mysterious, with an impenetrable wall of darkness surrounding him! We get to see from the seme's point of view for once (though the uke's feelings are so easily read - every emotion shows on his face), and it really breaks the stereotype that they're unfeeling, cool and abusive things. You know.

Don't take it too seriously, and you'll find yourself falling in love too.

How adorable!
by khanaami
August 29th, 2014, 8:31pm
Rating: 8.0  / 10.0
Nothing special, but the couple is too cute for words. Just read this series like any other highschool romance and you will enjoy it. One thing, I hate how stupid the male protagonist is at times. Like when he approaches some girl for a few pages. Of course yaoi mangas aren't really nice to female characters, but was it necessary to include her? Now that my rant is over, you may like this is you want an unexpected uke and seme development. I know people enjoy that, I know I did.
Was this comment useful?  Yes

More than just typical seme and uke
by CynicallyOp
July 24th, 2014, 6:43pm
Rating: N/A
Really it would the average yaoi manga aside from the fact that both sides being equally vulnerable is so rare. Also, it's very funny and you get to know the characters pretty well despite it being so short.
Was this comment useful?  Yes

cute and fluffy
by whitespade
July 3rd, 2014, 4:12pm
Rating: 8.3  / 10.0
i love their characters, both of them are adorable in their own way. i also pleased with the plot progression, there is no unnecessary drama or love triangles, just the teasing between two boys which i find low key but still stimulating.

nice to read for a quick moe.
Was this comment useful?  Yes

Kasukabe character was ok for me. I quite liked his harsh and somehow rude attitude on the outside.
Misato character wasn't bad...but something about him didn't felt fully right. Like there was some hole in his character.
But biggest problem was the story and it's development.
I don't actually think the story and the sex scenes are in good balance. It's feels like the mangaka decided to do cute shounen-ai but still with sex...and it didn't worked out very well..at least for me. Nothing against such concept if you find out how it works together. In this manga...most of story development is hardly dimmed with their sexual activities. I think if it was better balanced...I'm mean like the story development would got more space in whole manga...it would be ..maybe... better.