Login to add items to your list, keep track of your progress, and rate series!
Description
Junko Sakuraba, a 27-year-old lecturer at an English conversation school has no boyfriend. Her parents set up a marriage interview for her with a man who turns out to be a Buddhist monk. However, Junko has no intention of becoming a temple wife, so she refuses to do the interview. Soon afterward, the man signs up to become her private student. 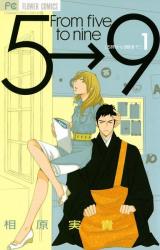 i wish this mangaka can stop creating mangas like this
by hugeboy33
July 27th, 2021, 1:17am
Rating: 1.0  / 10.0
she wrote this and Hot Gimmick. see the pattern? both have abusive male lead, pushover female lead, and unnecessary harem. both romanticize the abusive relationship between the leads; she got locked up for god's sake! and this was meant for women, i wish the mangaka would stop already.

other than that, the plot was badly paced, everything was rushed, no explanations. characters were two-dimensional at most, the actions they took had no coherent motive,, as if they act for the sake of taking an action.
(well, tbh, i dropped it afted the 2nd volume so i might have missed a lot)
Was this comment useful?  Yes

Horrible
by blackluna
July 13th, 2016, 5:58am
Rating: 1.0  / 10.0
I picked up this one randomly, and I'm sorry I did: the protagonist is both irresponsible and uses indecision as an excuse for using people and being a overall horrible person. I have no idea why she's the centre of a harem. The monk equally horrible, being of the "entitled" sort, but if I start, I'm just going to go on forever. There are no redeeming qualities to this work what so ever. Well, to be fair, there was a kind of interesting couple in the background, but it really isn't worth reading the manga they appear in.

Toxic.
by noticing
April 24th, 2016, 1:33pm
Rating: 4.0  / 10.0
The relationship between the monk and Junko is just toxic. I find myself liking the monk (because I love yanderes who are possessive, but not to a serial killer level) and his lovable sides that appear sometimes but one moment later when he gets really forceful of what he wants in a wife in Junko, I hate him. He knows she has dreams of going overseas, but he wants her to stay with him at the temples and be the 'perfect' wife. That's selfish, controlling, and overbearing. I'm going to be so angry if this manga's ending turns out to be Junko giving up her dreams to become a mere monk's wife who can't do ANYTHING she wants to freely.
This is a Aihara Miki's typical reverse harem, which always has cliched male characters around female protagonists slowly creeping in to become a romantic interest. As much as I really enjoy her reverse harem, I do wish some male characters such as the other teacher and the student who crossdresses had a whole separate manga with romances with just them. I just feel like they're really interesting characters that are gone to waste.
Was this comment useful?  Yes

Problematic...not even faves, just problematic.
by jojalee
January 16th, 2016, 10:39pm
Rating: 5.0  / 10.0
I hope she moves overseas and never looks back, jesus. The monk is such an annoying character I don't know why she doesn't just get away

She gets angry and yet she keeps going back, you're doing this to yourself girlfriend.
Was this comment useful?  Yes

...i'll put this manga in my on hold list until
by ese
November 22nd, 2015, 12:16am
Rating: N/A
I agree what most previous commenters said about this manga, what a messed up characters at one time i like that one character but then it's either hit or miss as expected from this mangaka. I'll wait for this to be completed to read this manga again but it's depend how those mcs and plot develops.

Entertaining
by khmershinobi
October 25th, 2015, 11:14am
Rating: 8.0  / 10.0
But content-wise, this manga is terrible. The direction, in which the so-called plot moves is terrible. The characters constantly contradict themselves with the stupid things they say and do, and I find myself unable to like anyone, save the friend of the female lead, who is at the very least, rational in her own way.

BUT despite all the negative things I have to say about this manga, I will admit that one of sensei's strong points is the ability to make me want to read more, even though everything the character's do makes me cringe.

Hot Gimmick, another work by her, was something I hated, but could not stop reading.

As much as I hate her cliché's, doormat female leads, and domineering male characters, she is just too good at making me want to read more. I love harems, jealous guys, and drama (in moderation).

Anyone willing to give it a try, you will see what I mean if you're an avid shoujo reader.
Was this comment useful?  Yes

Hated it
by Localjrw
August 21st, 2015, 6:54pm
Rating: 1.0  / 10.0
All the characters are such messed up human beings. Their behaviour is destructive to themselves and those around them. The main character is weak and has no sense of self worth; a victim of her own stupidity. If you met them in real life you would go out of your way to avoid them.
Was this comment useful?  Yes

Stayed for the 'Yandere-ness'
by smily_lois
July 18th, 2015, 1:15am
Rating: N/A
First thing's first: I detest this manga. Why? Simple, it's disgusting. Nothing good will ever come by following their principles.

But man, the monk guy is a yandere. He is actually rather 'tame' for a yandere, cause he doesn't really attempt murder. But still, his way of 'showing love' (also known as abuse) for the ever-so-stupid Junko-sensei is soooooooo....*sighs*. Sadly, that is always a plus for me.
Was this comment useful?  Yes

I read this only for Momoe x Arthur. I hate practically every single other character and, even then, I sometimes fluctuate between hating or loving Arthur. The only likeable character, in my opinion, is Momoe. Why? Everyone is either self-interested, self-absorbed, annoying, indecisive, or a major manwhore/slut—and using such derogatory words to describe certain characters in this manga make me feel like I'm insulting all the manwhores/sluts in the world (you never know, some of them might have a really nice personality but just like sex too much to function), that's just how terrible some of these manga characters are.

Otherwise, I feel really nervous about all the drama that is happening with Arthur and Momoe (considering Arthur's past) and I hope the author doesn't ruin the only "good" couple in this entire manga.

No, no, no, and no.
by MoonStar18
June 6th, 2015, 2:01pm
Rating: 1.0  / 10.0
Just no. I tried. I really did. The main female lead is just so stupid!
Spoiler (mouse over to view)
"I want to live my own life, so I hate you. Wait I like you. Oh no I don't. Did you just become a psycho and lock me in a room? I guess you're the one for me! Love ya'!"
The side character who is a friend of the female lead... I REALLY wished she would become the main lead. She's at least likeable. And I've read up to chapter 18 thinking at some point it has to get better (or I get to read about the side characters romance because it seems more interesting), but it doesn't.