Login to add items to your list, keep track of your progress, and rate series!
Description
Reana lives peacefully in a small town deep in the province of the Earthside Kingdom. She has a loving father, an interesting job and the childlike trust in the people around her... But everything changes after she encounters a dying dragon. He is the last one of his kind and possesses the power which can shake the world - what a great titbit for others! And so Reana is thrown into turmoil, into the desperate search for answers - while the hunt after her begins. 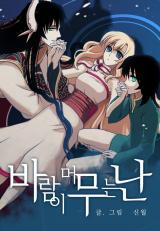 
Category Recommendations
The Husky and His White Cat Shizun (Novel)
Princess to the Rescue!
Philia Rosé: The Prophecy of the Crown of Thorns
The Perfect Ending for the Villainess of a Fairy Tale
Dusk Howler (Novel)

Dumb female lead.
by tinkerbel_99xmn
March 29th, 2022, 12:27pm
Rating: N/A
You won't learn anything from the female lead, sge harms the people around her with her stupidity and selfishness it is sooooo annoying.
Was this comment useful?  Yes

Story: 5/10 It's predictable. The story of a dragon imprinting on a pure-hearted girl means lots of enemies and near-death situations for both. But unfortunately, the writing doesn't fully capture the beauty/tragic nature of an immortal pure abstract being gaining sense of humanity. That slow budding and eventual devastation is depicted very well so far...

Characters: 1/10 The dragon is like a wall. He rarely has any valuable screen time. The girl MC is a dumb, naive kid that doesn't listen to her advisors. She claims to want to protect the dragon, yet keeps putting everyone in danger. The entire cast is just frustrating to read about....

Translation: 4/10 It's annoying to read a story with so many misspellings and misused words.

It's such a pity that this story has so many shortcomings since I really do like the premise. Unfortunately, with settings as grand as this one it's exponentially harder to live up to the readers' expectations. :/

Mediocre so far (c45)
by PZcolo
September 8th, 2017, 4:09pm
Rating: 3.5  / 10.0
I dislike the world building here, not because it's not interesting but because it's poorly built and explained, at least imo. All has a rather unappealing feeling of being arbitrary, since the author does not explain the world, how it works, what it's rules are and so on but rather just introduce little bits of knowledge when convenient to his storytelling. This creates, in me at least, the feeling that the author changes the setting and world at will rather than have it constructed and work on a stable foundation. I deeply dislike this.
As for the main characters, I don't like them either but I can accept them, they are pretty well defined since the beginning and their changes are slow, proper, I may not like how or why they do this or that but they make sense (except for the most important decision Reana takes, to follow Kairak, I can't make sense of that desicion, much less given when it's made and how Reana is not oblivious to the reasons that lead to that point), so I'll reserve my judgement after seeing how they develop. As for the secondary characters, since as I said above the world feels arbitrary the same goes for them, they act seemingly incoherently and the reason is sometimes explained later, this is accentuated since they all seam to have hidden agendas, again giving the feeling that the author just makes it up as it goes.
So in short, if the author really has the world defined and has the story already thought out, then the problem lies in his inability at the time of presenting it to the reader, otherwise, if he doesn't, the apparent mess of the story and chars actually makes sense.
Dropped, tried hard to end Season 1 but couldn't. Might try other time.

I Love It!!
by lckyone
August 4th, 2017, 10:28am
Rating: N/A
This is one of my favorite WEBTOONs it has everything I love in a story!! However, there's slow updates which is kind of disappointing even though it seems to already be complete.
Was this comment useful?  Yes

Great webtoon
by Tanniaotaku
September 7th, 2016, 1:48am
Rating: 10.0  / 10.0
Both the story and the art are ideal for fantasy/adventure enthusiasts. One of the best webtoons out there at the moment, if you ask me.

Also, ignore the the silly critiques below regarding the protaganist's personality. Reana is a great character that slowly develops. It is actually very refreshing to see a kind and gentle female lead in a story, with the abundance of loud-mouth tsunderes that are painfully overused in manhwa and mangas now-a-days.

I also like the fact that the male lead, Kairak, is very unique. Definitely not your average main character, which makes the interaction between him and Reana all the more fascinating.

Definitely worth the read!

Good story but really silly female
by KylAnd
May 13th, 2016, 4:52am
Rating: N/A
Like i said - the story was interesting... like really good, but sadly they made a very good female character into a very stupid one (im sorry i don't know what else to say). Her priorities are weird... she is linked to the last of the "free" dragons and what do you do... go and broadcast it to the world.... Seriously!! Are you trying to get yourself captured/enslaved all so you can appease your guilt. Imagine what you would be forced to do if you really were captured... more harm than good. Ugh! Why do storytellers create such unrealistic characters.
Was this comment useful?  Yes

Not as good
by rhin33
July 24th, 2015, 3:28am
Rating: 7.0  / 10.0
Spoiler (mouse over to view)
It's not that I dislike this webtoon but I don't like it either. The fantasy element, dragons, romance is all good however the way it is webbed into the story is unappealing. For starters what's up with these characters? They are all so depressing with their stories about slavery, revenge and struggle for power. There are almost no lighthearted characters. Reana is a bit of exception but she is just a plot device so I don't really empathize with her. Kairak is like a stone, it will be quite long until his character start influencing the story directly. The reporter and his Akoon were nice but... one was killed the other turn to revenge........ >>
There is the point that there are too many characters as well and the plot can't handle them skillfully enough. That may be the reason for the slow story progression and the occasional flashbacks.
I can't rate it more than 7 (6 even but, oh, well). That is up to the current 103 chapter.
Was this comment useful?  Yes

I love this webtoon but...
by VioVermillion
May 4th, 2015, 4:14am
Rating: N/A
Yeah, I like it, but I really dislike Reana, because she's too kind, in the stupid way. She just doesn't know what is more important, and sometimes I really feel bad for Kairak ;(
Apart from that, I love this webtoon and I'm willing to give a 10.
Was this comment useful?  Yes

Awesome!
by fontu
January 3rd, 2015, 1:57pm
Rating: 10.0  / 10.0
I wonder why the rating on managupdates is so low. I give it 10/10! The art is gorgeous, though it changes over the webcomic, the plot is very interesting, the characters are brilliant... Also, I like how the author created an original fantasy world different from anything I've seen before - starting from the races living in it and ending with the details of how this or that works. Guess there's A LOT OF WORK hidden under the core. Definitely worth reading!
Was this comment useful?  Yes