Login to add items to your list, keep track of your progress, and rate series!
Description
A collection of short stories that look to mankind's exploration of space, and examine the possibilities that we could face when we decide to take those first fateful steps into the unknown. 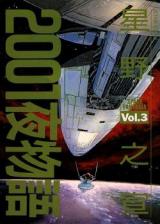 A bit too American-esque, but otherwise good
by calstine
March 24th, 2017, 1:31pm
Rating: 8.7  / 10.0
My only big issue where 2001 Nights is concerned is that the whole series reads exactly like a North American comic, not a manga. Barely any of the significant characters are East Asian, there are no South or South East Asian characters at all (very odd considering how advanced India is in the field of astronomy), the smartest and most heroic people all have North American/Western European names and most "stupid, but evil" characters are clearly Eastern European. Add to that the left-to-right reading format and the art style, and a third of the way through I'd completely forgotten I was reading a manga. That isn't a bad thing, per se, but...if I wanted to read a comic book I'd have read one; it's not what I'm looking for here.

Aside from that, though, the stories are fairly decent. They're typical hard sci-fi, so very few of the themes were new to me, but taking into account the year of publication, I'd consider the plotting and world-building to be quite impressive for its time. Some of the planets featured were truly interesting, and while few characters were memorable (they were such tried-and-true stereotypes), there was nothing terribly offensive about any of their designs save for the obvious racial skewing I noted above. (You'd think something set in the 22nd century and beyond would be a bit less racist, but it was written in the 20th century, after all!)

Recommended for fans of true science fiction, provided you're prepared for a very un-manga-like reading experience.

incredibly amazingly breathtakingly wow
by whitespade
April 22nd, 2012, 1:52pm
Rating: 9.9  / 10.0
a must read for all sci fi fans. all the information in this manga is plausible and believable, making your head spin in wonder. the delivery is near perfect whereby just a quick read through it we can understand the gist of it, thus the enjoyment is not retarded by any complex theory. however, it is not dumb down - the mangaka is skillful in laying out the foundation of the science in easy to digest way.

the stories are interconnected oneshots - some of the earlier ones actually will tie to the stories in the end. thus even though there is little recurring characters, the connectivness of the stories make the subsequent story even more enjoyable. each story is a little gem, with a theory and a message for the readers all woven in the plot without forcing the readers to acknowledge it. most of the time it give the readers a small disappointment for the folly of mankind, and wonder to the vastness of creation.

every single character in the series have their own face and personality, however small the frame he gets. however due to the time the manga is made, the propensity to beard are almost overwhelming. as someone not accustomed to such accessory in real life and manga it can be quite discomfiting, however it dont affect the stories at all.

the art is very beautiful and appropriate to the genre of the series. the mangaka is very skillful in drawing the characters in caucasian look since almost all the explorers are of that origin. the art actually reminisce of the america comic book style - angular cheekbone and sturdy body, nearer reality than the usual big eye manga style. planetary bodies and the celestial heaven is drawn in a lush, majestic way that can take your breath away. the ships are also drawn in detail, make one believe this is the correct shape for ships to have.

this manga is highly recommended for any sci fi fans.

hard science
by jasperv
October 8th, 2010, 2:02pm
Rating: 10.0  / 10.0
yeah hard science witch mean no unrealistic (sci-fi) technology but i like that author still kept his mind open and that science itself will evolve in the future and give us some new ways to explore space!
Was this comment useful?  Yes

Real Science Fiction
by Mierten
March 8th, 2010, 12:01pm
Rating: N/A
This isn't fantasy. It isn't people controlling robots to get special powers. It isn't romance with space suits. It does go into possibilities of how people will behave when space travel develops. Focus of stories are different between issues but with tie ins to previous stories. Thus, it doesn't have the emotional impact but the intellectual one.
Was this comment useful?  Yes

The story is quite nice, even if the episodical way it is laid up is a little drawback for me.

It made me think about a wide variety of issues I hadn't really considered before, the same as NHK might do for somebody not living that life.