Login to add items to your list, keep track of your progress, and rate series!
Description
1-3) To Hold Someone Dear
Kayama Tomoaki is a handsome and reserved employee of a major company. One day, the efficient and reliable junior on his team, Saiki Keiichi, gets sick and Kayama goes to visit him at home. At work, Saiki is always stylish and nearly perfect, but unexpectedly, at home he is the complete opposite! The events of that evening change the superior and subordinate relationship between the two. Kayama is scared of loss and never lets strangers get close to him but when he realizes that Saiki only has eyes for him, his feelings waver...

4) Summer Contrail
Shuusuke is a busine... More...
1-3) To Hold Someone Dear
Kayama Tomoaki is a handsome and reserved employee of a major company. One day, the efficient and reliable junior on his team, Saiki Keiichi, gets sick and Kayama goes to visit him at home. At work, Saiki is always stylish and nearly perfect, but unexpectedly, at home he is the complete opposite! The events of that evening change the superior and subordinate relationship between the two. Kayama is scared of loss and never lets strangers get close to him but when he realizes that Saiki only has eyes for him, his feelings waver...

4) Summer Contrail
Shuusuke is a business man who loves books... but he never gets a chance to look around since there's no bookstore around and he's so busy. One day, he walks around a corner and accidentally knocks over a high school student who's entering... a bookstore?! Shuusuke is thrilled to discover the little bookstore... but soon he discovers something (or someone) much more precious.

5) Weekend Melancholy
Continuation of the couple from Summer Contrail

6) Passion Carved by the Tyrant
Set in the early Taisho era, this is a story of two men who used to be classmates in an Imperial university. Eight years later, Fuyutsuki is an author and Sano is the son of nobility and a lieutenant in the army. Can winter camellias somehow bond these two men together?

Latest Release(s)
v.1 c.1-5 + Extra (end) by Dangerous Pleasure over 8 years ago
Search for all releases of this series 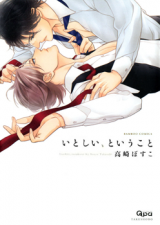 I didn't mind
by juls91
June 9th, 2015, 9:49am
Rating: 8.0  / 10.0
some of the actions the semes made here, cause they were actually very loving and caring . The art was superb and i liked all 3 stories but i believe the second story was the best one (even though it was the simplest one).
Was this comment useful?  Yes

The art is absolutely fantastic, and I respect that the mangaka prefers couples of equal build. And none of that always-doing-it-from-the-front-because-I-want-to-see-your-face bullcrap. Oh, and no crying uke! Yaaay!

The first story--7/10. A bit too apology-rapey at first for me. Saiki (megane) has a flimsy character and shifts gears so many times, I don't tell what his actual personality is. Overall, a bit dull. Something I would read on the bus or in class, but would rather be doing something else when I get home--that kind of dull. (*doesn't bat an eyelid at reading BL in public... welp, when you're casual about it, no one notices*)

Second story--8.4/10. I loved how they would
Spoiler (mouse over to view)
just read together in the back library, peacefully, in their own private realm.
It's intimate, relaxing, romantic... The art and composition makes it seem so much more romantic, really. I liked that they didn't see each other too often, but didn't love each other any less. I like older uke characters a lot~ Heehee. My only complaint is that though their common interest in books was the catalyst for their feelings, the second half seemed to completely forget about it. The first part's ending was bitter with the taste of reality, but it wasn't resolved in the second half.
Spoiler (mouse over to view)
For instance, if they moved in together and at least had their own library, that would've been nice. Then agin, it is a 2-shot; there wouldn't have been much room.

The last story--10/10. Everything about it was just perfect. I love relationship dynamics with no name to describe them. The art was stunning; and the dominance play and erotic imagery... Oh boy...
Spoiler (mouse over to view)
To tattoo someone so they'll never forget you; to leave a part of you behind in them.... U-Uwaaah--so romantic-- And to have only ever kissed him once in 8 years, gives so much more meaning to the one.
The one-shot is short, but still manages to display how they came to be attracted to one another. And doing it from the back to see the print he left on him... Nice.

Only the first story was rapey at all. There's no "each". The stories aren't that bad; it's the better of the bunch, where BL is concerned.
It is her first work; it says so right in the author's note. I've seen many professional works much more amateur than this.

Needs a lot more
by OmNom
February 5th, 2014, 5:07pm
Rating: N/A
So this is the mangaka's debut manga so I suppose I could cut her some slack because of her inexperience. The stories are actually not too bad, well they're not too good either, but at least there's room for development and progression. That said, the way the mangaka deals with the narration and story telling still needs a lot more work, and her characters lack a certain appeal to them, I guess more depth and substance would be a nice improvement. The artwork is okay for the most part though, but the smut in particular needs more emotions put into it, much like the characters themselves.
Was this comment useful?  Yes

Was so disappointed(((
by delena666
January 21st, 2014, 3:23am
Rating: 2.0  / 10.0
Why is it that practically every time I love the drawing style the stories are just awful? Dubious consent at best, and except one story I'd say a rape or near-rape at the beginning of each story, which many might consider a norm for yaoi genre, but a big no for me.
Was this comment useful?  Yes

:)
by Kilaron
January 6th, 2014, 11:00am
Rating: 10.0  / 10.0
I really liked this one, though it annoyed me every time a couples story ended cause I wanted more. But the last couples story was without doubt the best one. It was really good considering it's the mangakas first work. I look forward to her future work.
Was this comment useful?  Yes

Hmm
by JapanRocks
January 1st, 2014, 8:02pm
Rating: 7.0  / 10.0
Is this one of the mangaka's first works? It just felt like a beginners work. The stories had some potential and there were some cute moments but nothing ever really clicked to make it memorable. The art is very nice though and the smex scenes were kinda hot but other than those scenes everything else was meh... It's hard to discribe the atmostphere but after reading numerous yaoi works this is barely average.

Left Wanting Something More
by Here_And_Now
December 25th, 2013, 9:31pm
Rating: 6.0  / 10.0
The art was nice, but the stories were so-so. It felt like the main couple just happened to fall in love through a series of coincidences and chance. Even then what makes them love each other never really was revealed. It honestly seemed a lot more like lust than love to me. It could have been better and I wanted better out of it. There was enough potential, however uncapitalized, that I'll still check out any future works by the mangaka that catch my interest.
Was this comment useful?  Yes

--
by supmaguire
December 25th, 2013, 8:45am
Rating: N/A
I really like the drawing style of this work, and I was so happy she included a story involving guys in uniforms in the last chapter oh mah gaaaaah *fangirling*
I would be happy to read another work by her in the future.
Was this comment useful?  Yes

Hm...
by MangomyTango
December 24th, 2013, 6:11pm
Rating: 7.0  / 10.0
Well, the art is appealing...but the couples were kind of lackluster?
The last couple was definitely a bit better than the other two. The first one...I tried to like, but couldn't bring myself to. It fell into the jealousy cliche and the romance was almost never really delved into. But since it's the mangaka's first time, I guess it's understandable as well.
Was this comment useful?  Yes