Login to add items to your list, keep track of your progress, and rate series!
Description
During the second half of the 19th Century, Europe became fascinated by Japanese culture. A young Japanese girl named Yune travels to France, where she starts working in a shopping arcade in Paris at a crafts store called Enseignes du Roy. She and the store owner named Claude cooperate with one another in order to get over their cultural differences. This is the story of Yune's stay in Paris. 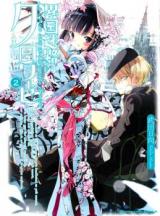 Note: You must be logged in to update information on this page.
Forum Posts Click to view the forum
Ikoku Meiro no Croisée Manga Gets TV Anime
over 11 years ago
Is this series even still being scanslated?
over 12 years ago

So pretty
by fluffypotato
October 22nd, 2015, 2:40pm
Rating: N/A
The art for this is seriously gorgeous. Honestly, I love this style and it's one of the most amazing things I've ever seen

. Aside from that the story is kinda hard to follow at times, especially if you read this manga online because of the way some of the chapters are organized. I think the anime does a lot better at putting the story together. Nevertheless, it's really a sweet and down-to-earth kinda of manga and I'd recommend it.
Was this comment useful?  Yes

Re:Label
by elianthos
May 7th, 2012, 8:18am
Rating: 8.0  / 10.0
@Juji: look at the magazines hosting this manga... shounen magazine = shounen manga.
It's a target demographic - and a Japanese public target at this - label issue, not a 'this content in my head [and in whatever idea of 'my culture' is] should belong elsewhere because it goes against my expectations of what shounen is supposed to be' issue. Just sayin'.
To expand on the matter: being shounen, shoujo, josei, seinen target labels and not genre ones, the range of themes and styles they offer can be as varied as the possible tastes of the public. That is, wider and more diverse, and less strictly defined than your taste or mine alone can be

.
Just because this story doesn't feel like romance to you, it doesn't mean that other people can't and won't enjoy it. Guess what, they published this in a shounen magazine in Japan and they made an anime out of it too. There must be a market for it = there are boys who are fans of such an approach to romance - a 'potentially budding in the future' romance in this case - . Just maybe not *your* kind of shounen and/or romance. Different strokes for different folks. Peace

Hence, either you use certain label correctly or if you arent' familiar with the Japanese criteria of magazine publications those shonen/shoujo/josei/seinen labels will only confuse you XD.
This manga is an adorable period piece and slice of life. As long as you enjoy period pieces and the characters featured here, just enjoy this story by its own merits regardless, or just pick another one closer to your taste. Either way, good search and happy reading ^^.

Adorable
by Saons
August 24th, 2011, 1:56pm
Rating: 7.0  / 10.0
Adorable little story about a girl from Japan living in Paris. While not entirely realistic, it strongly shows how the two cultures clash and how the characters must work through their differences. The characters themselves are typical, but likeable. Worth a read, for sure.
Was this comment useful?  Yes

Very cute and sweet
by nausicaa
March 1st, 2009, 4:10am
Rating: N/A
Almost didn't pick it up but the first chapter sounds promising, and I'm really rooting for the girl. I don't think the romance is going to be very strong (at least not for the moment as she is really a child), but the relationship seems like it'll develop into something meaningful and nice. The drawing is very cute! I like!
Was this comment useful?  Yes