Login to add items to your list, keep track of your progress, and rate series!
Description
High-school student Ao decides he’s in love with Ryoumei-san, a priest at the local shrine and Ao’s childhood friend. Not one to beat around the bush, Ao immediately tells Ryoumei he wants to do perverted things together, but it will take more than a little persuading to get the shocked Ryoumei into bed. Between bad advice, romantic rivals, and Ryoumei’s scruples, there are many obstacles in the path of true love.

Note: Shunpei from Koi Cha no Osahou appears in this story as the main character's best friend. 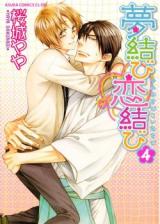 Note: You must be logged in to update information on this page.
Forum Posts Click to view the forum
Why is it locked?
over 12 years ago

Funny, and full of charm
by Rinshi7
May 23rd, 2018, 4:03pm
Rating: 10.0  / 10.0
I enjoy the story and the characters a very long time ago and I still enjoy it today.nthe story is very down to earth and nothing. Very big happens but it still a very fun read and that?s okay. I love the authors works which this was my first one. I can?t wait to read more
Was this comment useful?  Yes

Yeah, Just No.
by toastmuncher
April 3rd, 2017, 11:36pm
Rating: 1.0  / 10.0
I cannot, simply cannot, understand why is this well liked. Apparently, Sakuragi Yaya does which is why this is pretty staple for her.
From story to art nothing works for me. While the art may have been tolerable in another setting with this cast and dialogues just no. There is absolutely zero character development, the story is just badly done and none of the characters are likable. Except for Shuuji. That was what gave me the strength to keep on going.
Was this comment useful?  Yes

Still a pretty fun read
by Qinni
August 12th, 2016, 9:21pm
Rating: 8.0  / 10.0
Personally I found this manga to be pretty fun to read. I don't think Ryoumei-san's completely straight....and people CAN be bisexual, you know (to some viewers who somehow thinks that because a guy's only dated girls before, he's gotta be completely straight. what a weirdly strict way of looking at things...)

I like the fact that Ao's extremely different from other ukes. It's fun to have a completely blunt uke who knows exactly what he wants and goes for it (but within realms of consent lol). Ryoumei's a normal tsundere, hahaha.

it's just fun, nothing too deep or anything that strikes me as extremely memorable, but I enjoyed it.

Why?
by sarin68
April 29th, 2015, 12:45pm
Rating: 4.0  / 10.0
Just... why? Why would the mere prospect of bottoming suddenly turn a straight guy gay? Why would anyone be as stupid as Ao when it comes to relationships in modern society? Why is his friend the biggest idiot on the planet? Why can't Ryoumei just reject him wholeheartedly instead of guilt-tripping his way towards consent? Ugh... just... why?

The manga still gets a 4 from me though because I like the side-story and Shuuji is just amazing in everything he's in. The art is okay, the dialog somewhat natural, etc etc. I just don't like Ao, Ryoumei, Ao's friend or the weird line of consent the mangaka is treading.
While reading I just hope Ryoumei will come to his senses and stop seeing Ao. It's annoying.

I would like to say
by juls91
September 4th, 2014, 9:20pm
Rating: N/A
I didn't like Ao that much, he was great at times but others i could not stand him, and i'm ok almost all the time with the ukes, but i guess (based on what i read in the last page) that is what the mangaka was looking for, not an uke that is loved by everyone. Though he seemed to be very well liked by everyone in the story lol. Even so, it was funny and very cute at times, i just cannot believe the amount of chapters 18 seems pretty long for a childhood friend-becomes lover-story.

The one thing I love about this manga and/or mangaka for that matter, is with regards to the point of view - you can read what one is thinking and what another character is thinking (not one-side and/or will not make you wonder what the other characters - mostly major ones - are thinking.)
Was this comment useful?  Yes

Not feeling it
by OmNom
September 9th, 2013, 2:28pm
Rating: 1.0  / 10.0
I have had and will always have issues with Sakuragi Yaya no matter what it is from hers that I read - and this manga is no different, it's just that the extent might not be as serious as usual. Her art bugs me all the time, and her characters' chains of actions annoy me to no comparison. Like, out of no where something just suddenly springs up, and the characters would just go along with it like nothing. It feels really unnatural and forced I have such a hard time swallowing everything. Not to mention the mediocre storyline and unbearable clichés scattered everywhere without control. Sometimes when it's done right, clichés can turn out to be good, but this is so not the case here. I just hate it when things are overrated like this.

This Manga Is Like Organic Diamorphine!!!
by cutiewootie
March 23rd, 2013, 8:53pm
Rating: 10.0  / 10.0
I am so happy I read this. I feel so ecstatic. No, I feel euphoric. I feel as if I am flying through clouds and as if I am on heroin. I really enjoyed and loved reading this manga. You have to read it, if you love yaoi manga. After this moment of happiness leaves me, I know I will cry. Why? Because the story ended and I wish it could have just gone on and on and on.

I have read a lot of yaoi manga and this is the first one to leave me with such cocaine like euphoria. You will not be disappointed. I have the most biggest crush on Shunpei. My next crush is on Ryoumei. My last crush is on Aka. I sort of wished Aka would have sexually incestual feelings for his brother Ao, but all is well. Sigh. Now, I am going to cry.
Was this comment useful?  Yes

Instant favourite.
by Baniita
March 2nd, 2013, 11:17pm
Rating: 10.0  / 10.0
I've never seen an uke quite as amazing as Nao. He looks like the typical cliche uke, but oh dear god--he actually has a sex drive and wants it, isn't some weak Marty Stu in distress (read: perfect karate form to knock out sex offenders), and even attempted to top. He might look cute and innocent, but he's a sexy little minx. D;<

The story is super cute. It has its flaws, but dear god it doesn't matter for how perfect it is. The plot isn't the best, but the super endearing characters make up for it. It has it's amusing comedic moments as well, my favourites being
Spoiler (mouse over to view)
when Aka interrupts Nao, and he's all 'gtfo, I need to masturbate'.
When Nao gives Ryoumei the second button on his blazer when he graduated middle school. as per old tradition since it's the closest to the heart on the gakuran... Ryoumei's friend remarks that "in this case, it's closer to the crotch". XD

Nao's definitely one of my favourite uke. > A<) /screaming internally.
He's TOO FRIGGIN' ADORABLE!
Was this comment useful?  Yes

Loved it!
by Namiya
September 29th, 2012, 5:18pm
Rating: 10.0  / 10.0
Another great series with very lovable characters, a story that keeps you reading til the end and because it's 4 volumes, also good pacing.
I enjoyed that it took them a while to get to the sex, that way it was such an amazing build up, I felt my heart almost stopping from excitement when stuff finally happens.
Both the main characters were very likable, you just have to love Ryomei who tries hard to be a responsible adult and he comes across as a great person. Ao is an amazing uke, so cute and sweet and you'd suspect him innocent when in reality he had sex with girls already and thinks of all sorts of perverted things.
I also liked the side characters, Shuuji was a great guy on the side and it was especially cool that he, at least in this manga, didn't actually interfere by trying to steal Ao or anything... so he was a (granted, somewhat suspicious) good character for advice to the main characters.
I also adored the twin, Aka, who was so unlike Ao and just adorable with his always angry and over the top personality...

But I gotta say, aside from the main couple, I really really loved Shunpei. I recommend reading Koi Cha no Asahou for more backstory to him. There, he was a small kid struggling with studies and karate practice and his first love for a guy. Now he's all grown up, looks gorgeous, and is still unhappily in love. I really liked this characters, the way he interferes just enough to stir some trouble but he knows when to back out.
I seriously hope to God that Sakuragi Yaya-sensei will one day give him his own manga so we can see him become happy as well!

The art is gorgeous, the story is great, the characters amazing. It's not perfect at all, but it's a very very entertaining read that I'm sure I'll keep in my list of favorites.
Was this comment useful?  Yes