Login to add items to your list, keep track of your progress, and rate series!
Description
Kyou and Asu are two sisters whose mother passed away while Asu was still a baby. After racking up an unbearable amount of debt due to his gambling addiction, their father disappeared - leaving the two siblings to fend for themselves.
Thus begins these two spirited girls' efforts to make ends meet while still enjoying their childhoods to the fullest. "No matter what hardships we have to endure, I'm happy so long as we're facing them together!"

A warm and sweet little slice-of-life story that will surely enrich you with a feeling of peace and good humour! 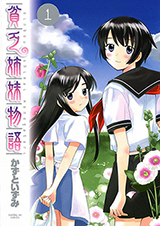 Note: You must be logged in to update information on this page.
Forum Posts Click to view the forum
ended?
over 11 years ago

Shimai Bonds are Strong and Tight
by raichu688
June 23rd, 2014, 5:33pm
Rating: N/A
Love the main characters' tight sisterly bond. One can really sense the family bond there despite having mostly only each other. Haven't watched the anime yet, but it's on my to watch no matter what list.
Being one of the starting anime of the early 2000s, BinbouShimaiMonogatari 's intro movie is abit in need of polishing, but that aside, a great series this is! ^_^'
By the generally Girls Love author, Kazuto Izumi, this is her first ever animated adapted work!
No, BinbouShimai is not Yuri but is about the sisterly bond between Kyou and Asu (whose names mean today and tomorrow respectively).

Nice, with low-key humour
by Hell_Clues
March 11th, 2011, 3:12am
Rating: 7.5  / 10.0
The manga has some fault. It's too optimistic and doesn't express crushing depression. It really makes their situation seem too nice. Some of the dialogue is also a little stiff. As if a man wrote it but it seems more how a man might write an idealized female character(though the manga-ka is surprisingly female). It's also very focused on girls, there are only women in most places, that is a negative because it's unrealistic, well there's about two other reasons that I don't want to even mention as to why that is a negative.

The manga has a way having low-key humour, and there's nothing objectionable ever happening. So there's not much to hate. To a small degree, the characters taking their situation in stride will make the reader feel good and maybe even try to transfer that to their life. But in that regard, various things I mentioned keep it from hitting that note as largely as it could because the characters seem one dimensional and less real.

The anime is a sad slice of life without that touch. So I think this manga is better, but also has a very different mood.
Was this comment useful?  Yes

Extemely good
by mystichead
March 12th, 2009, 7:09pm
Rating: 9.2  / 10.0
even as a critic...... I find it hard to complain on the important aspects of this.....
a little Short but sweet.......semi-episodic, with quite a satisfying yet someone open ending, which leaves with a weird closure.
Quite touching, and this is indeed a cute slice of life, the relationships are adorable
although there is not much character development, concerning the two protagonists, it doesnt actually matter, the plot and semi-episodes are good enough to leave one happy
Was this comment useful?  Yes