Login to add items to your list, keep track of your progress, and rate series!
Description
1-3) Yoshizumi has worked for a long time with his lover and secretary Osanai to start a company. No matter how tired Yoshizumi was or how long their day had been, Osanai could always seduce Yoshizumi into having amazing sex. But lately Osanai is troubled, and even though Yoshizumi wants to make him feel better, somehow things never go right, and just what does their handsome American client wants with Yoshizumi's lover?

4-5) Childhood friends Nishimura and Kawana have met in Tokyo after not seeing each other for years. Now Kawana, who is a mother-hen, takes care of unreliable freelance phot... More...
1-3) Yoshizumi has worked for a long time with his lover and secretary Osanai to start a company. No matter how tired Yoshizumi was or how long their day had been, Osanai could always seduce Yoshizumi into having amazing sex. But lately Osanai is troubled, and even though Yoshizumi wants to make him feel better, somehow things never go right, and just what does their handsome American client wants with Yoshizumi's lover?

4-5) Childhood friends Nishimura and Kawana have met in Tokyo after not seeing each other for years. Now Kawana, who is a mother-hen, takes care of unreliable freelance photographer Nishimura, while in his heart his admiration and love grows. When Nishimura joins Kawana on a business trip and ends up helping him out of a tight spot, how will their relationship progress from there?

6-7) Minemura's boyfriend, whom he had thought was a gentle man, had just broke up with him. Add to that the fact that he had made a big mistake in work, and his life is not going so well. A meeting with his supervisor, Kirihara, after work eases both men's hearts and troubles when they realize that they have more in common than they had first though. But Kirihara was lonely, drunk and desperate, so why does he seeks out Minemura again? Less... 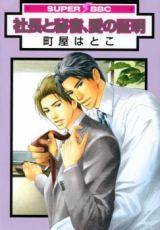 I can't believe I actually cried
by On_vacation
January 14th, 2015, 2:06am
Rating: 8.5  / 10.0
It's a very low-key manga that's not gonna totally blow your mind or anything. But at the same time, it's just so gentle and emotions are portrayed so well that I actually ended up crying like twice ha ha. Just the way the mangaka portrays emotions and touch is just so well executed, it's super awe-inspiring.

The mangaka managed to drive that knife into me in JUUUUUST the right ways. Like that one chapter with Yoshizumi
Spoiler (mouse over to view)
having a dream that Osanai died had me sobbing with that part where he's sobbing into the ground with his hand where Osanai's leg would be. That brought on the tear works
. Also when Kirihara tells Minemura that he's a kind person, but it worries him how he never treats himself kindly. That part had me like flat out sobbing cause it reminded me of what people have told me when my depression was super bad.

I don't know about others, but I usually rate mangas that can make me feel so intensely that I actually end up crying rather high.

Emotions actually exist
by Chainless
February 25th, 2014, 5:50am
Rating: 7.2  / 10.0
I love sensei's works cos it's practically never just the steamy sex, but there's also all kinds of emotions beautifuly written in too. The characters' have their pasts and ups and downs and even though some og the stories are shrt, they don't feel that rushed.

Totally recommended if you're looking for something different in exchange for the steamy yaoi with no plot.
Was this comment useful?  Yes

In the first story, I really liked the subtle detail that the uke "cleans himself" behind the scenes. It added a realistic touch.

The second story was good as well. Though it had a typical story line, it was brought about nicely and cleanly.
Was this comment useful?  Yes

cute
by blu_papillon
December 26th, 2011, 11:10pm
Rating: N/A
Not as good as her other works, but that's not really saying much as her stuff is all way above most of the stuff that's out there. I liked this one a lot. Especially the second story about the childhood friends reunited. Cute and enjoyable and like all of sensei's works, the romance is strong and the sex sexy. =) I like the art a lot as well.
Was this comment useful?  Yes

Her trademark
by blueseeker
November 30th, 2011, 9:51pm
Rating: 9.0  / 10.0
One can say that sensei's trademark is sensuality and passion, because the stories are not overly steamy, or just about that. Rather it reflects the characters longing, sadness, excitement and happiness vividly. Maybe not deep, but certainly not plain fluff or filled with cliches.
Was this comment useful?  Yes

Love love love
by MangoLuve
August 17th, 2011, 9:35pm
Rating: 9.0  / 10.0
Well basically, all day today I've been trying to read as much of this mangakas work as possible. I really adore her works because they flow so well. I like how her charecters quickly accept and embrace the fact that they are in love and can kindle this love qwith as little drama as possible. Its refreshing to see unlike most yaoi where theres most of this denial that goes on so senseis work is different from that. I also like honest her charecters are, blunt even, about their feelings. Insecurites the charecters have are expressed well and not in a dramatic sense where their thoughts are all over the place, but instead in a straightforward kind of manner. The art i great too and the uke and seme are approximetly the same size so no preteen child like faces so YAY <3 i love that alot. Oh and the sex scenes are really hot. Just thought i'd throw that in

SPOILER (how do you do that bloody spoiler thing? someone please message me ¬_¬)

The first story was really sweet and i liked the ukes forwardness. It wasn't the seme constantly attacking, but intead the uke and it was understandable that he became upset when the seme fell asleep while they were having sex. It wasn't blown up to the point where he storms out or whatever, he handled it like a real adult and forgave the seme even though he was upset and i feel really, thats how real men should be.
Second story, i was supriesed at how quickly they got it on but i was glad at the same time. They didn't stretch it out too long when they were both aware of each others feelings. But also, i guess because they had waited so long to get together, it all came out in this massive burst.
Third story was simply touching. Two people who had neglected themselves were able to come together and heal one another. It also made me feel like being happy.

I like the mangaka alot so I unconsciously put her stories on a pedestal
by jellaaay
May 10th, 2011, 9:39am
Rating: 8.0  / 10.0
For starters, the 1st story was such a sneak. Tricky little beast. I didn't like the way she ended it (dont worry, it's a "happy" ending)
Spoiler (highlight to view)
I started to dislike the uke's character after the 2nd chapter. Then came the third, I thought, maybe if I knew more about his POV then I'd grow to like him. Anyway, the way the Final Arrangement started caught me off guard. I was seriously anxious... it looked real and I was hoping the seme was dreaming all of it. I even ended up crying. Gosh. What a way to end their story.

The second's story's less dramatic. The couple was very sweet. I'm a sucker for reunions so I really liked this one.

Third one's not as depressing as what the summary made it seem to be.
Spoiler (highlight to view)
And even though you kinda get the vibe that they're together cause they "lick each other's wounds"... I really felt like it was more than that. The way it was written made it believable that they really fell in love. And maybe they're both depressed people, seeking comfort from each other. Still, it doesn't mean that they'll be fine with whoever as long as they get comfort. If it's not with each other then it wouldn't really work out. That's the kind of idea I got from them as lovers.
The art's pretty, as usual. It's not very captivating, but I really like her style.

Aaaah.
by Trifoilum
September 25th, 2010, 2:58pm
Rating: 10.0  / 10.0
Compared to Machiya Hatoko's other works, this is more detailed, less sugary (for those who can't swallow Nekasenaide's sugary sweetness), and succeeded to be more poignant, keeping it gentle while showing passionate sex.

And this is one rare occurrence when the mangaka can actually differ inbetween passionate sex and loving, tender sex. O_O

Minus point? Hmm, Nekasenaide have little to no angst, but this...actually has angst at several point. So.... I would say I hope to simply see more.
Was this comment useful?  Yes

sweet
by keristars
September 24th, 2010, 10:24pm
Rating: 9.0  / 10.0
There are three stories here, the first with three parts, the other two with two parts each. The first one is about a long-time couple who run a company together - one half is the company president, the other is his secretary. The second story is about childhood friends who had gone different ways, then happened to get back together with as strong a friendship as ever. The third is about a supervisor and his underling, both of whom are lonely and looking for comfort. All three stories lead to fluffy, happy love between each of the couples (granted, the first one starts that way, too), though the last is a bit melancholy in places.

Mostly, I just wanted to leave this comment to say how charming these three stories were. The plots were fairly simple, but they made me smile, and didn't feel like yet another retread of the same old thing, even though I can't say that they're entirely original, you know? Maybe I'm just in the mood for a quietly sweet romantic story tonight, but these worked. I also really liked that in the third story, the couple getting together didn't suddenly make them super happy people with everything right in the world. They came into the relationship a little bit lonely and a little bit broken, and sure they end up happy (this isn't a tragedy or anything), but that original melancholic feel to their personalities hasn't left entirely, the way it often happens in BL manga with similar plots.

Anyway, this isn't going to be a manga to wow your socks off or anything. It's quiet and charming and good for when you want to read sweet and happy romance stories, without a lot of contrived-feeling drama.
Was this comment useful?  Yes