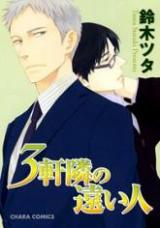 Fantastic!
by Nyxie4649
January 1st, 2022, 10:58am
Rating: 10.0  / 10.0
It’s so difficult to create the atmosphere of a deep, long lasting, and painful live in such short stories, but this one does it perfectly! You end up sympathizing with his deep unrequited love, yet it isn’t more dramatic than it needs to be and stays faithful to its style of adult romance: reasonable, with just enough angst & no irrational reactions ~
I’ve re-read this a couple of times over the years, but it’s still as lovely every time!
Was this comment useful?  Yes

) and cute compared to the main one that's kinda cliche with the protagonist forcing his crush in a kiss. Though i love how stoic faced he is ^w^.

But yeah. I still think the author should have made the extra one a series, there are many things that i can think of that can still happen based on it's plot.

10 for the main story!
by sofistree
February 19th, 2015, 7:53am
Rating: 9.0  / 10.0
I really loved that the protagonist was torn up about (as a kid) when forcibly kissed his crush. And that he was determined to be gentle if he ever got a second chance. It's so refreshing to read something like that, where the character actually cares about the safety and comfort of their loved one.

That line from Noboru was great! "Let's just skip all the other bull**** and get to the good part. I'm talking about sex." Lol!

I kind of wish we had one more chapter with the main couple instead of the extra on the writer at the end. I'd have liked to see their relationship really get started. The last story was fine, but not great.
Was this comment useful?  Yes

2. Hello, the best and more realistic and wonderfully written version of this trope with great dialogue and great and interesting characters! Thing is, I believe that cliches (especially cliches that have yet to be well executed) aren't necessarily a bad thing. What's important is to rock it, which Tsuta totally did.

Holy hella--this was lovely. The main story was rushed at the end, but it was good.
The main character Mitsuya is jaded and blunt, and when he goes dere it's adorable.
Meeting Jinx and giving him so many pages in the 1st chapter seemed like a waste.
Spoiler (mouse over to view)
The part where Mitsuya asked Noboru to firmly reject him so he can move on tugged at all my angst-moe-heartstrings. aaaaaaaaaa

First one-shot:
Spoiler (mouse over to view)
And I think somewhere along the line, I started preaching to him the dangers of walking on water.
Pffft. This ossan is great. I'd love to get drunk with him and go off on plot and writing tangents.

The author's diary comic--she wanted to do "something along the lines of 'student council president banging the janitor* (COU HG HACK) HAHAHHAHHA 10/10 would read! Go for it, Tsuta-sensei!

Mixed feelings
by MirayAllen
October 1st, 2013, 9:43am
Rating: 7.7  / 10.0
Mitsuya is the protagonist I always craved for so; stoic, no doubt, but nonetheless insightful. The buildup was quite well executed, partly -- mostly -- thanks to the voice he was granted. He is one of those refined characters that pulls you in so effortlessly, you won't know what hit you.

My main issue lies with Noboru. For starters, I didn't like the change in personality and I don't think his half-assed excused for it made any sense. But my mistrust worsened with the last chapter and the sudden change in attitude towards Mitsuya: the guy poured his heart out, got nothing from it, and two days later they are having sex. I sincerely doubt Noboru's "love". I think he was just curious (he said so himself) and took advantage of Mitsuya's feelings (he almost said so himself likewise). It was a real let down and I got really mad because Mitsuya didn't deserve that kind of treatment.

For this to work there should've been more resistance on Noboru's part -- perhaps a whole chapter dedicated to his own feelings or something of the sort. Of course now I'm torn. I found the whole thing an extremely enjoyable ride but it ended in a trainwreck quite frankly....

I recommend it on Mitsuya's behalf and on account of the beautiful art.

ahhhhhhhhh
by gwkimmy
August 17th, 2013, 10:55pm
Rating: N/A
this mangaka is boss at making characters with moe expressions. both seme and uke in both stories were hella adorable. i'll definitely check out her other works.

in regards to the first story however, im still reeling with how it all played out. like, what!? just like that?
Spoiler (mouse over to view)
i mean, what, after the guy confesses, noboru is suddenly in love with him and wants him? i guess i can see how he might begin to be attracted to him because of how moe mitsuya looked when he confessed XD but still! we just heard it from his mouth, it didn't show us anywhere his sudden change in heart to explain it at all and then bam, sex. also was he ever in love with his older bro? i felt like that love triangle never got explained, it was just a plot device i guess.

kinda disappointed because i lovedddd the rest of the characterizations, from the gossip-loving coworker to the older bro with a brother complex. i guess noboru and some other key plot points didn't get the same attention to detail treatment. whhyy sensei whyyy!
Was this comment useful?  Yes

I really liked it but....
by reine eclair
May 28th, 2013, 11:19am
Rating: 8.5  / 10.0
I really liked how the plot plays out, that it is going slow and you can understand how mitsuya is feeling. I agree to the comment below. The ending really disappointed me. It is not really justified how his love became requited like that. This series would have a lot more to anticipate if the ending was not too abrupt to end like that..


Well all in all..it's a good read i guess

Unexpected
by Poemi
April 26th, 2013, 10:03pm
Rating: 7.0  / 10.0
Definitely didn't expect their relationship to go the way that it did, at least so suddenly. It seemed like the story was going so slow at first. I was thinking, "get on with it already!" Then everything quickly fell into place. I'm not sure if I liked that part or not. It did make for an interesting uke, though. So bold!
Was this comment useful?  Yes

Average.
by nezushi
July 19th, 2012, 9:46pm
Rating: 6.0  / 10.0
This was a very fast paced manga, i mean what the hell kind of plot was that?
i really enjoyed the beginning of this manga when the boys were still finishing up in high school/middle school, graduating and getting ready to move on into adulthood.
i would have rated it higher if they continued the storyline like that and how
Spoiler (mouse over to view)
Mitsuya was secretly in love with Noboru and kissed him, but got rejected in the end.

That would of made things more interesting and developed.

When the author did the sudden time skip, everything moved way to fast. ESPECIALLY when
Spoiler (mouse over to view)
Mitsuya reunited with Noboru and he finally confesses his hidden feelings after ten long years, but of course got rejected again. Then a couple of days later it's like BAMN, sudden change in Noboru's feelings and he's all like
"i love you," i find you attractive, so let's try this dating thing after i've been tramatized as a teenage kid by you suddenly kissing me!~ He should of dated that other kid with black hair
(forgot his name XD)
Honesly i'm disapointed.

Great Art, Great Story!
by Dezi
September 19th, 2011, 6:45am
Rating: 10.0  / 10.0
This was definitely a very good read. I was all tense and nervous and I really suffered with the main character Mitsuya. SUZUKI Tsuta is very good at creating complex and deep characters in a short amount of pages. I think this is her best story!