Login to add items to your list, keep track of your progress, and rate series!
Description
Tanaka Manabu is a geeky student. One day on the way to school he meets a girl carrying a bloody bat. That girl is Ryuuzaki Reina, leader of the school's female delinquents. It's love at first sight. A gag manga (with a combination of 4-koma and normal page) about having a yankee dere-dere girlfriend.

Note: In the title of this series, "yandere" isn't referring to this term, but instead it combines "yankee" + "dere-dere".

Note: In the title of this series, "yandere" isn't referring to this term, but instead it combines "yankee" + "dere-dere". 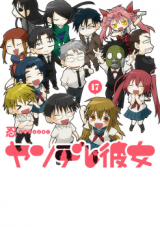 Note: You must be logged in to update information on this page.
Forum Posts Click to view the forum
Finished?
over 5 years ago

Fun, despite what the author did.
by Sajkim
April 8th, 2022, 1:24am
Rating: 7.0  / 10.0
This deserves a better score, but the flaws that the male lead (for some reason) "develops" after the chapters progress still upsets me to this day.

Spoiler (mouse over to view)
I am not advocating for perfect characters, but I felt like the author tried to give the male lead more depth by deconstructing the way in which he was represented from the beginning.

This is only my opinion, of course. And, what's more, it shouldn't distract you from the fact that this is a really funny manga.

You should just take into account that the male lead gets screwed and that the ending is not as fulfilling as it could have been.
Was this comment useful?  Yes

Funny manga and not to serious
by Kaitou21
September 4th, 2013, 1:12pm
Rating: 10.0  / 10.0
If you came here to find an actual plot filled manga with drama, and serious romance then hit the back button, this is gag manga (and a good one to), it'll have you laughing and keep you laughing, recommended for those who don't care for super serious romance manga but want laughs instead of drama, and especially recommended to those who prefer strong heroine's to weak girly ones

It's a bit strange that this is listed on MU as the main series, and the magazine is listed as the side-series, when this series alludes to (but does not cover) events in the magazine, which sometimes gets confusing.
Was this comment useful?  Yes

funny!
by lorgeinoh
January 28th, 2010, 7:18pm
Rating: 10.0  / 10.0
lol the pair is completely opposite
as they say opposites attract
will I wonder how the story
will progress and their love too!

^-^ those who love romantic comedic manga
this is one of those, you'll love it!
Was this comment useful?  Yes

but still this is a great manga... i love the charachters expression

Yandere seems to be a bit mislabeled
by eliwoodx12
June 18th, 2009, 12:25am
Rating: N/A
But that may be because i usually associate the term Yandere with brutal murders that scare the crap outta people.

But this series is really fun to read. Reina is such an awesome heroine when one tires of the standard type of girls
Was this comment useful?  Yes

Personally
by HumanoidInterface
June 14th, 2009, 2:06pm
Rating: 9.0  / 10.0
Thus far this is similar to onidere, however I like the art better. She is in fact tsundere, although occasionally we see gag yandere behavior. Oh and for the record, x0mbiec0rp was right, Reina's facial expressions are priceless.

Give it a shot if you enjoy onidere.

Don't be fooled by the title
by x0mbiec0rp
June 13th, 2009, 1:11pm
Rating: N/A
It's a combination of Yankee and dere-dere, so the character is actually far more tsundere than yandere (as the term is usually used). Other than that, it's enjoyable. Not wonderful, but funny, like most 4-komas.

The girl makes hilarious faces, though, which makes up for the disappointment over term mismatch.