Login to add items to your list, keep track of your progress, and rate series!
Description
Chihiro Kouzuki is a stage actor and works part-time as a housekeeper to earn more money. His uncle called him about taking on a housekeeping job for Aoki, an elite businessman who lives in an expensive condo. Chihiro accepts, not realising how demanding Aoki can be about how he wants his condo tidied up. He is so demanding that Chihiro is starting to lose his patience with him... 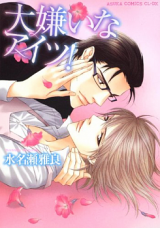 Cutiee
by Himeowchama
March 30th, 2017, 12:56am
Rating: 10.0  / 10.0
Ok stories like this (love-hate relationship) usually contains two people hsting each other at first and one of them (usually the seme) wpuld realize that he loves the other person instead. And he would probably end up forcing his feelings to the other person (sometimes would lead to rape). OR the other person may realize (usually the seme again) but he would still treat the other person like shit. BUT THIS STORY IS DIFFERENT. YES YES IT'S CLICHE BUT HOW THE SEME HANDLED THE SITUATION WAS VERY MATURE AND IT'S CUTE. SERIOUSLY, IT'S PERFECT IN IT'S OWN WAY.
Was this comment useful?  Yes

Hmm...Basically a run down of the whole thing
by bluedrop
June 20th, 2015, 12:14am
Rating: 7.0  / 10.0
Chihiro (the obvious uke) is a young aspiring actor who doesn't want to give up acting (something he loves) for the sake of living practically. He is employed part time by his uncle's cleaning service, and so lives from paycheck to paycheck with a flexible working schedule.

His latest client, a young successful businessman, Aoki Yuto (the seme), the same age as Chihiro, owns a swanky condo downtown, but has no time to clean, so he hires a cleaning service.

Their first meeting goes disastrously, because, of course,
Spoiler (mouse over to view)
the seme is a douche and basically belittles Chihiro. Questioning Chihiro's capabilities, all the while insulting Chihiro for pursuing acting and choosing to live so unpractically.

Chihiro question's his decision to pursue acting because of troubles that their troupe is having and also the comments of Yuto continue to dog his mind.

The last page of the first chapter basically sums up the chapter. The seme is a huge ass**le. (Heh, pun not intended)

Soon, we learn about the seme's backstory explaining his d*ckish behaviour. And Chihiro's relationship with Yuto gets better.
Spoiler (mouse over to view)
Also: Yuto starts appreciating all that Chihiro's been doing for him, which is quite a turn-around from his earlier behaviour.

Things progress quickly. Like. Seriously. It's still chapter 2, the uke is wary of the sudden change in attitude of the seme. Yuto starts showing obvious interest in Chihiro, which Chihiro, of course (rolls eyes) is almost always seen reacting with uke-blushing.

Chihiro meets Yuto's older brother by chance, and gets roped into something he never expected.
Spoiler (mouse over to view)
Yuto is pretty whacked in the head for some reason. It's sort of a little funny, but also a little pathetic. You'll feel bad for the seme, like, seriously. Gotta question his life choices for him because he doesn't seem to think anything's weird about how he's acting.

At first, I assumed the tsundere tag pertained to the seme, but it seems both characters are exhibiting characteristics of the trope. Don't get me wrong, I'm as much a fan of tsundere characters as any, for as long as it is endearing.

Sometimes, tsudere characters, basically emotionally constipated characters, range from the adorable to downright grade-A assh*les. Both characters kept fluctuating from one end of the spectrum to the other.

Their story gets cuter later on, and the characters started to grow on me.

I didn't love the whole thing but it was an okay read. It's light and fluffy, and not for those looking to read something deep and super angsty.
Was this comment useful?  Yes

FLUUUUUFFFFFFF
by On_vacation
August 23rd, 2014, 12:44am
Rating: N/A
Pretty cliche plot, one that you think would be pretty average, but everything is just sooo friggin charming and cute that you can't help but be a little bit smitten with the story. Like some people would probably say that it's dull or boring since it's pretty much fluff, but my attention didn't waver the entire time I read it. The scene where
Spoiler (mouse over to view)
Aoki says that Chihiro is beautiful
was probably my favorite scene cause I found it absolutely hilarious, ha ha. That being said, I wish it were longer, but at the same time I like where it ended. If it went on for any longer the story probably had a good chance of dragging on, but I want Chihiro interacting with Aoki's family. But overall, good read. Didn't regret it one bit.
Was this comment useful?  Yes

Terribly sweeeeeet!
by Kinky-Chan
December 28th, 2012, 12:43am
Rating: 10.0  / 10.0
Ahhhhhhh!! When I read this, I've been smiling all the way that my face feels numb now! I liked this one! As expected of another good manga by Minase sensei! Although the storyline sounds very cliché, what with the elite thingy, but the characters are the ones making this manga shine.

At first, I thought Aoki is some kind of stoic and cold character but who knows, he could actually melt away his jerky attitude and have such a cute personality!! It surprises me! not to mention that he's so direct! The rest of the characters are lovable, and there isn't any characters that can make you hate them. But one thing about the storyline is that the plot itself isn't very deep so if you're the type that likes something simple and light-hearted, this is probably for you!
I totally recommend this! :> This totally made my day!
Was this comment useful?  Yes

Cutteeee
by Gattaca88
June 4th, 2012, 11:40am
Rating: 10.0  / 10.0
I found this to be very light and fun. Sometimes, you don't want the heavy baggage that comes with serious stories. This yaoi is for kicking back and reading something fun after a hard day. Enjoy

Typical
by MangoLuve
January 29th, 2012, 9:21am
Rating: 7.0  / 10.0
So far, it is rather cliched with the whole tyrannical rich guy then theres the poor aspirational guy who is filled with hopes and dreams and then they fall in love (surprise!) so its not really anything different, but thats not particularly unpleasent either. In fact, it is rather pleasent for me because i enjoy tsundere charecters!
Was this comment useful?  Yes