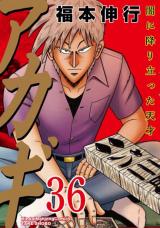 Note: You must be logged in to update information on this page.
Forum Posts Click to view the forum
Akagi to End in February 2018 After 27 Years
over 2 years ago
How long is the Washizu Arc
over 8 years ago
Akagi question.
over 11 years ago

Absurdly, uniquely, almost unfathomably long.
by MondSemmel
May 19th, 2019, 8:50am
Rating: 8.0  / 10.0
Akagi is a special kind of manga. The vast majority of the manga, more than 200 chapters, covers a single gambling night against a single opponent. And yet, it's full of strategies and bluffs, excitement and despair, luck and bad luck.

But I can't give a higher rating to a story that is as glacially slow as this one. To give some perspective, just the final mahjong round by itself in the story takes almost 30 chapters. Even Hajime no Ippo or the DBZ anime can't compete with that. In some chapters, the players didn't play a *single* tile...

This story was written by a prolific author, but it seems like he felt the need to prolong and stretch this story far past the point of reason. And yet it's still pretty good! Bizarre.

Akagi Is One of My Favorite Manga Characters Ever
by McCamyTaylor
February 6th, 2011, 2:48pm
Rating: 10.0  / 10.0
While I enjoy Kaiji, I like Akagi more. So what if I don't know squat about Mahjong? Akagi is an uber bad ass, like Alucard, but without fangs. I wish someone would scanlate the rest of the manga.
Was this comment useful?  Yes

You don't need to know nothing
by kaloo
June 4th, 2009, 8:47pm
Rating: 9.6  / 10.0
Despite knowing nothing about Mahjong at all I have found both Akagi and Ten to be incredible series, though this is better. While the artist's style isn't the standard Manga style it after a while it grows on you. He's got flare and style. It's pretty much kick ass.
Was this comment useful?  Yes

Not bad.
by Slashout
March 10th, 2008, 2:51pm
Rating: N/A
The manga isn't bad. It really helps if you know Mahjong as the story revolves mostly around "fights" using mahjong.
If you don't know what it is, it might be hard to get into as you'll have lot's of combinaisons name that you don't know anything about, and even if you are explained you'll probably forget them right away...
The art is a bit special and need a bit of "getting used to" but it's not bad, and it goes well with the story.
I would recomend watching the anime wich is fully translated.
And watching Kaiji, wich is a lot similar (same art, setting pretty close) and is a lot better than Akagi in my opinion. As is revolves around stuff less complicated than mahjong.
Was this comment useful?  Yes