Login to add items to your list, keep track of your progress, and rate series!
Description
An RPG-ish gag manga about a half-dragon-half-human girl whose love for a popular idol/dragon-slayer leads her on a quest to find a potion that will make her fully human. Which of course leads her and her friends in a quest to defeat the terrible Demon Lord Azatodeth. 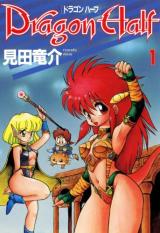 Ahead of its time
by imercenary
March 12th, 2014, 10:44pm
Rating: 10.0  / 10.0
Lets get this out of the way first: This is OLD and DATED. The art, the writing, the gags, its all dated. Even the character designs are old, with many characters dressed up in obvious reference to the original NES Dragon Quest/Warrior games.

That said, this is an incredible story for its time. The story is very self-aware of the absurdity of video game RPGs. Legendary blacksmith that can make the ultimate weapon (for the hero)? Well, given more time, what else could he make? (A LOT). With so much talk of war and armies, where is everyone? Outside of the warzones, (mostly) just living their lives actually. Why are the heroes always so focused on saving the world? Lets have the protagonists go on adventure for their own selfish reasons! (Love)

And remember, this story originally came out in the late-80's. So the SNES/Genesis/Mega Drive wasn't even out, thats how early this story pioneer the genre of video game tropes.
Was this comment useful?  Yes

Fantasy Parody
by nroejb
September 12th, 2013, 9:46am
Rating: 9.0  / 10.0
This manga is a little hard to rate, as it is a parody to the clichés and tropes of the late 80th and early 90th fantasy games and mangas.
If you are into these things as I am, and thus able to get the countles references, it's a great work of art.
However it's parodic nature probably means that part of it is lost to the younger generations that don't get the references, to them this manga won't be great, but probably still be a good, unique fantasy comedy.
Was this comment useful?  Yes

Nostalgic
by fuzetsuscans
April 24th, 2013, 12:28pm
Rating: 8.0  / 10.0
A fun little silly story with a sexy protagonist drawn in the old style! Nothing amazing, but fun if you like lighthearted gags.
Was this comment useful?  Yes

Pity that first wideban volume was little better than rest of series (more funny). The art is getting gradually better, yet i find the art in the beginning more unique. Dragon half showed me after quite a lot of boring series that i haven't seen everything and that it is still worth searching for a good manga.
Was this comment useful?  Yes

Amazing classic
by Conquestor
August 26th, 2009, 8:11pm
Rating: 9.2  / 10.0
With dragon half, the author sticked almost entirely to the genre of being a comedy. It's very imporant to understand that going into it, however, if you stasrt reading it only expecting a funny gag manga, you'll be pleasantly surprised. There's a reason this manga's still considered a classic after so many years, and it's because dragon half feels like it completely nailed the fantasy comedy genre.
Was this comment useful?  Yes

Great fun! must read!
by chulian1819
September 1st, 2008, 2:56pm
Rating: 10.0  / 10.0
has a history full o fun from start to finish with humor of all kinds (echii, Shona, all!) is a great parody of any adventures series, as a discredit to the heroes and villains and they see as complete idiots, the characters are very many but they are linked tru all the story, if they want to laugh this is one that should be read
Was this comment useful?  Yes

hilarious
by wait321
July 16th, 2008, 7:36am
Rating: 10.0  / 10.0
This is the funniest manga I've ever read. Most of the humor is a parody of Shounen stories that ridicules heroes and their adventures. There are some silly comedy as well.

The artwork isn't that great, but the childish style reinforces the idea that the story is a comedy and shouldn't be taken seriously.

Overall, this is a very funny and easy-to-read manga that doesn't try to be anything more than a comedy.
Was this comment useful?  Yes

Underappreciated Definitly!
by GeoHolyhart
February 26th, 2008, 10:12pm
Rating: 9.2  / 10.0
Great series so far. I'm past volume 4 and its been very enjoyable. A light and easy read with wacky moments. Keeps a good flow story-wise as well, with loveable characters.
Was this comment useful?  Yes

Dragon Half Impressions
by ryuu_ou
August 5th, 2007, 10:11pm
Rating: 9.0  / 10.0
This is a pretty good series, there's nothing deep here. Sometimes the jokes fall flat though. It reads a lot like playing an RPG, except without the random battles. Mink makes up for any faults this series may have.
Was this comment useful?  Yes