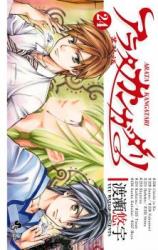 Note: You must be logged in to update information on this page.
Forum Posts Click to view the forum
Complete?
about 1 year ago
Arata Kangatari Heading Toward Climax
over 8 years ago
Arata: the Legend Gets Anime
over 9 years ago

Can you stop debating if it's shoujo or shounen?
by IndiesGS
November 2nd, 2019, 11:38am
Rating: N/A
This is Shounen manga because it's running in Shounen Sunday, no other way. This title not gonna became shoujo because of your sexist sentiments. You are not manga-scholars to call something shounen or shoujo. You can feel whatever you want because your stereotypical image of shounen manga is based on 90s works like dragon ball or Naruto and any other stuff that is for true dudebros. Shoujo manga is beautiful medium in it's variety of tropes and genres, stop using it as an insult or way to diminish any shounen manga that not enough tough for your false standards. That's only makes you look stupid and narrow-minded.
Was this comment useful?  Yes

Well...
by morphin007
November 22nd, 2014, 4:25pm
Rating: 5.0  / 10.0
Actually I can really say if I like this manga or not because I skip more than half of it. Simply because I don't care about the present Arata (who is in the past) and just read the parts about the past Arata in the present...
I can't find anything likable or at least making me able to bear this annoying character... Personnaly I think Watase should have focused only on one Arata (so the present one) and made a spin off with the other one.
Was this comment useful?  Yes

Stop removing shounen
by MinM66
July 6th, 2013, 3:54am
Rating: N/A
I won't argue whether it is a shoujo or not, because in all honesty there are maybe 3 shoujos that I have read where I didn't want to slam my head against the wall, so I am not the most experienced shoujo reader-- but would you PLEASE stop removing shounen. By definition it is run on shounen magazine, gives more credibility for it to have shounen there than shoujo. Add shoujo if you absolutely feel it is necessary, like in half-prince, but removing shounen is pure idiocy... thank you

It's shoujo
by philip72
March 22nd, 2013, 11:18am
Rating: N/A
Yes, I know it appears in Shounen Sunday, but without a doubt it's shoujo. All the repellent tropes enjoyed by a stereotypical female readership are there in abundance. The only males I can see this appealing to are the effete and the gelded.
Shounen Sunday must be trying to attract female readers and broaden it's audience.
Was this comment useful?  Yes

Boring and confusing
by RS456
December 4th, 2011, 7:49am
Rating: N/A
The current Arata (future Arata) is boring. He is not as interesting as the past Arata. Though it started out as the past Arata as the main character he was eventually made into a side character which is kind of depressing. He was the more entertaining Arata. It would of been alot more interesting it they frequently switched places.
Was this comment useful?  Yes

Lurve it ^_^
by whistlebird
May 23rd, 2011, 7:38pm
Rating: 8.5  / 10.0
Poor modern Arata, no one loves him as much as they love the other one! Personally, I think he's great, although it's true I would like to see a little more of what's happening back home because it's HILARIOUS every time, and now super suspenseful. I think the reason modern Arata is the main character though is because he has more issues to work out and that makes him more interesting and easier to feel for. As for the story, I think it's just as great and just keeps getting better with every twist. The characters are solid (I like that even the villains have a good amount of depth, and the good characters aren't perfect), the art is clear and beautiful (and it's obvious this author loves bishies), and the plot is both fun and suspenseful. I also like that the occasional awkward situations are mostly funny instead of just... awkward in a bad way, like so many other mangas.

update: Okay, as the manga goes on, there are some pretty stupid parts and the powers of some of the bad guys are starting to border on ridiculous or wacky. There were some arcs that were very hard to get through because I could no longer take what happens seriously. It's still a very engaging manga, beautiful to look at, and still very funny sometimes but it may have slipped a little here and there in story and character. I hope it picks up again soon, once the author stops goofing around with random ideas (not that those aren't fun sometimes) and gets serious again.

this is shoujo
by ns2np5
March 4th, 2011, 6:27am
Rating: N/A
Well I had given up on Yuu Watase until I decided to try Sakuragari and whaddaya know it was good. I thought this would also be a change from her other works, since this is supposed to be shounen. But no, this is just her usual crappy shoujo stuff that I detest. The story is nothing special and it's hard for me to like the characters. The only character I like is the Arata that went to the future but he's only rarely shown.
Seems to me she should only write yaoi...
Was this comment useful?  Yes

Arata
by sumitinte
August 31st, 2010, 6:40pm
Rating: N/A
I love this series, it's absolutely great. I'm a big fan of Watase Yuu, her artwork is acceptable, and her humor really gets me--especially the facial expressions of her characters!
Was this comment useful?  Yes

not that good, not that bad, just average
by Kaito Zero
April 29th, 2009, 11:03pm
Rating: 7.0  / 10.0
the modern Arata seems really boring. i would rather read about the Arata that went to the future. from what I've read so far it seems like the modern one is the main character and he doesn't seem as interesting.
Was this comment useful?  Yes

Not bad
by fayt709
February 24th, 2009, 12:07pm
Rating: 6.0  / 10.0
I just keep wandering what's happening to the other arata, the one who was introduced in the first chapter but has been virtually ignored since except for brief appearences every now and then.
Was this comment useful?  Yes