3) Fake Lovers
Harajima and Eita have been pretending to be lovers for a year now. Why? Other people are suspecting something might be up.

4) Give You the Keys to This Apartment
When Wataru wakes up the morning after his girlfriend broke up with him, there is a naked man in bed next to him. And he has keys, so he's not easy to get rid of.

3) Fake Lovers
Harajima and Eita have been pretending to be lovers for a year now. Why? Other people are suspecting something might be up.

4) Give You the Keys to This Apartment
When Wataru wakes up the morning after his girlfriend broke up with him, there is a naked man in bed next to him. And he has keys, so he's not easy to get rid of.

5) Body Talk
When Hasumi collapses in the hallway, the much-admired Yasuki-sensei carries him to the infirmary. His cool hands and voice leave a lasting impression on Hasumi, but does the teacher feel anything more for him than he would for any other student? Less... 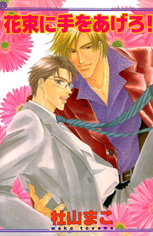 middle of the road
by pleochroic
March 30th, 2011, 12:30am
Rating: 5.5  / 10.0
i quite like toyama's art style, but the stories are nothing much. i wasn't exactly bored while reading them, but they also didn't leave any lasting impressions, and there was nothing to distinguish them from 50,000 other BL stories.

the first story is the longest one and would have been my favourite if the uke hadn't been such a blushing otomen (and i usually like otomen, but he was too much). throw in a female rival and you've got your basic plot. the other stories are as predictable, only even shorter with less character development.

uprated a tad from average because of the art.

si typique (-_-)
by jellaaay
December 21st, 2010, 5:20pm
Rating: 5.0  / 10.0
They were all very predictable. Though while I was reading I kept hoping for "this and that" to happen. When I finished, I wasn't disappointed or anything. Just a bit unsatisfied, I guess.
Spoiler (highlight to view)
Story 1 - This was the only one I favour (sort of). I liked it when the seme said "what does it matter if you're a man or a woman? I like you for who you are!" I thought it was very sweet and relatable.. I couldn't agree more. If it had been longer though I bet the story would've been more likable. I wish the mangaka just made the entire series based on them.

Story 2 - this story was the most boring for me. Basically they first pretend to be lovers cause guys kept trying to rape the uke. And the rest was all so predictable. They both actually like each other but are doubtful of each other's feelings.

Story 3 - this started off interesting. I thought it was going to be somewhat similar to Ano Kado wo Magatta Tokoro.. but the only thing similar was the uke thinking the seme was a university student but was in fact a highschooler..then breaks up with him "because" he's a highschooler. In this story though, the uke was in denial with his feelings since the beginning (even though he kept letting the guy hang around in his house) and really.. it didnt have the same passion as Ano Kado..can't even compare them anymore.

Story 4 - typical sensei-student love. student falling in love with the teacher thinking he doesnt have a chance turns out the teacher likes him too. bla bla

All in all they were all really cliche stories so it was a bit boring. Wouldn't re-read it. But I cant say I "dislike" it. It wasnt poorly done and the art wasn't bad, it was average. But really, just because it's a compilation of one-shots readers generally forgive the fact that the endings weren't satisfying or it's okay that "it was just that". And I've read other compilations that blew me away. (e.g. Bondz) So if I'm gonna rank this I guess i'll rank it in comparison to other one-shots that I've read.