Login to add items to your list, keep track of your progress, and rate series!
Description
Kim Jihyun, who lived his life as a disreputable surgeon, gains a second chance to relive his life. He then goes back to his middle school days, and live his life to the fullest unlike before, he studies nonstop. His goal is to become a dermatologist who make lots of money instead of the poor surgeon he was from previous life! 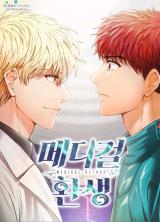 The story is interesting & move along fine.

The antagonist is hard to really appreciate. The situation around the antagonist seems strange and the lengths the antagonist goes with certain attempts to destroy the MC while seemingly unable to do anything are not that believable.

Overall though, many sweet and/or fun and/or thoughtful moments and fairly good art
Was this comment useful?  Yes

Decent with deep flaws.
by MondSemmel
November 19th, 2021, 2:24pm
Rating: 7.5  / 10.0
Medical Return is a decent reincarnation story with a believably overpowered protagonist: instead of superpowers, he has a lifetime of medical experience and training.

Some weaknesses of the story:

The main antagonist is depicted a bit weirdly (he gets screwed over by his upbringing, then once more by the protagonist's reincarnation). There's a love triangle that takes too long considering how little it ultimately matters. There's at least one case of a literal deus ex machina (c87). And crucially, while there's lots of medical terminology, you rarely ever see medical techniques actually performed - at the very least, scenes in the operating room almost entirely focus on the doctors, rather than on the surgeries.

Also, the antagonist continually commits crimes, but no-one can do anything because "there is no evidence". So they're all supposedly perfect crimes, but the story never puts in the effort to show how the antagonist could possibly accomplish them. (Contrast this with Monster, which goes to great lengths to show just that.) And yet the very same criminal continually drops suggestive hints in his conversations. So he leaves no evidence so he won't get caught, then gives hints so he will get caught?_?

And finally, there's a brief Americans-hate-foreigners or Americans-are-racist story arc. This is not the first manhwa to do this, and I just find the trope tiresome. I'm skeptical whether Asian countries are any better in this regard, and would furthermore claim that the existence of this story arc and how it depicts people from another nation is evidence to the contrary. (Speaking as someone who's from another continent altogether.)

mc is annoying
by jayaram
November 14th, 2020, 3:48am
Rating: 5.0  / 10.0
it started very well, but went downhill when MC forgives the villain and becomes friends with him.
but the villain poisons the MC, even after becoming friends with him(he helds grudge against him, later it revealed villain is psycho in progress)
MC is denser than the average your Japanese protagonist, mind you this is reincarnated story.
after 30 chapter MC starts to annoy he acts as clueless teenager.
story losses it originality and follow common Chinese troupes like mc save random homeless dude only it turned out to be a big shot and rinse and repeat it
Was this comment useful?  Yes

Decent.
by tiankioo
October 2nd, 2020, 2:33pm
Rating: 6.0  / 10.0
This is honestly quite good but it's held back by the overuse of suspense. There's always an air of dread while reading. scheme after scheme inside of another even larger scheme against the MC, rinse and repeat. Annoying, really.

Spoiler (mouse over to view)
That old man who keeps making it hard for MC and treating his son, Sangmin, badly which makes Sangmin have that inferiority complex.. I’M SO ANGRY.
Was this comment useful?  Yes