Login to add items to your list, keep track of your progress, and rate series!
Description
Kasumi Kishimoto is 15. Having arranged to stay with her aunt, she is surprised to learn that the other four people in the house are all male.

Latest Release(s)
v.1-3 c.1-26 by Manga Downloads & Hawks over 17 years ago
Search for all releases of this series 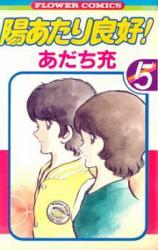 First of all, story wise it was good, though, sport is not my cup of tea and so is shoujo...anymore now that I'm way past it but still, I wholly enjoyed the comedy and slice of life moments of it. Some comments said how Adachi left it open ending, to me, it was left for us to have our imagination run wild which is the whole point anyway.

Aesthetic wise, I loved every single scene. It reminded me of Captain Tsubasa, which was also released around 1981, like this manga. I too, loved the fact how Adachi could not tell apart his own characters from different mangas of his, esp. Takasugi one. It is still funny thinking about it. As for all characters' look, they all totally lived up to this era just like most film characters from around late 1970s to early 1980s. Shin was actually pretty cute from outside look, his first appearance. And not to mention, her boyfriend, Katsuhiko, since his first appearance, he somehow looked just like Slyvester Stallone around that time, I for sure could bet Adachi used Stallone for that character hehe.

And lastly but not the least, character wise, it all felt natural. I loved that story of Sakamoto, that bulky guy. It was just like 2010s shoujo manga, My Love Story!! but wayyyyy earlier of course.

Spoiler (mouse over to view)
It didn't really. It feels very much like an axed ending, and I've read so many Adachi works. Nothing is resolved. Takasugi basically confesses to Kasumi at the end because her boyfriend writes a letter telling him he was coming to propose to Kasumi. Now, obviously Kasumi liked Takasugi and would have rejected her boyfriend's proposal, but it would have been nice to see. There was also a love triangle between lovable Ariyama, Keiko, and Shin the perverted asshole that went unresolved.

This could have really used 1 more volume. If you want a better ending, the anime seems to have it.

First time you read the open ending, you felt disappointed. I know that b/c me too. But somehow, someday you will realize that it's good anyway

ending
by tendarin
July 14th, 2010, 6:38pm
Rating: N/A
well somehow i'm dissapointed with the ending and i i think everyone know why somehow i think kasumi will end with her boyfriend this guy too quick give up ehh what with this cherring geez now i don't even have chance to get anime online to check if there will be more well but i like it
Was this comment useful?  Yes

Ok
by jackblack901
May 21st, 2009, 1:12am
Rating: N/A
As one of very first manga of Mirsuru Adachi, I still contains all of his characteristics, romance, baseball and an open ending. It's not really good but better than I expected of a manga that is 10 years older than me.
Was this comment useful?  Yes

Adachi core elements
by Anonymous
June 1st, 2006, 6:29pm
Rating: N/A
I believe that this manga was the foundation of Rough, as the core elements are the same.

It's one of Adachi's very early work, so, if anything, it's nice to see how his style was in the beginning. One thing I'm grateful for is that he improved his endings. If you thought that Rough and Katsu's endings were rather open-ended, you've seen nothing yet!