Login to add items to your list, keep track of your progress, and rate series!
Description
Welcome to The World, the most advanced online game ever created. Fourteen-year-old twins Rena and Shugo are two middle-school students who enter The World as level-one game characters--and now they're ready to take on anything...or so they think. When Shugo's character dies, he is transported to another level where he is entrusted to bear the Twilight Bracelet by the mysterious Aura. Shugo must find out who Aura is and why she gave him this powerful weapon to protect his sister from the dangers in The World. 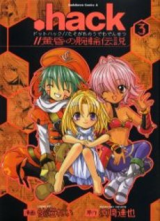 Kind of fun
by akari_mizunashi
June 27th, 2010, 8:20pm
Rating: 3.0  / 10.0
All right, this is a terrible series. Absolutely terrible.
But I liked it.
The idea of a totally realistic virtual reality game is pretty enticing.
Also, I was eleven at the time.
Was this comment useful?  Yes

This was painfully full of cookie-cutter characters and conflicts, and I think the term 'conflicts' may make it seem more exciting than it was. It was nice to see Balmung again, and Reki was okay, but really not worth the trouble of reading these.

If you are a hardcore Dot Hacker, then I guess you'll be reading this anyway, otherwise steer clear.
Was this comment useful?  Yes

Not great
by Aerozol
June 30th, 2008, 6:19pm
Rating: 6.0  / 10.0
The first one was great, I bought it, and then a week later went straight in and bought the next two- which then changed completely into a lackluster saga that pretty much just milked the characters that had been set up in the first one. No development, a lot of wanking around, when it really needed to keep up the freshness to keep it going.
When some much appreciated depth comes in, it tends to get drawn out again to a level where it's just shallow again.

I still enjoyed all of it, but as someone with little to no money to spend, I almost feel that the first one was just to lure me into buying the last two. Should have read them online.

Not so great
by danobou
June 17th, 2008, 8:55am
Rating: 6.0  / 10.0
This was the first manga I finished, but also one of the worst mangas I finshed. It starts out very exciting and keeps you glued, but then it becomes boring and lacks excitement. I'd say read it on the internet and don't waist your money. I read it at my library, and I'm glad I didn't spend a single penny on this dissapointing manga.
Was this comment useful?  Yes

Exciting
by Xeronia
May 2nd, 2008, 8:20pm
Rating: 7.0  / 10.0
Reading the manga just makes you want to keep on reading. It was good, but not as good as I expected, given how popular the anime series seemed to be (I haven't watched it). But overall, the story was satisfactory; a bit corny. Really, the whole thing is quite cliche, but the excitement is entertaining and too good to give up.
Was this comment useful?  Yes

Knee-slapping
by PinkuSato
November 24th, 2007, 10:29am
Rating: 7.0  / 10.0
This series is the first series I layed eyes on, the art style was s cute that I wanted to try readig manga so now I read manga everyday and it's part of my daily routine. this series is funny beyond all reason with a little bit of seriousness, I recommend this to newcomers.
Was this comment useful?  Yes

Fun
by Tisiphone
July 24th, 2007, 3:47pm
Rating: 8.0  / 10.0
It's a fun manga to read and has tons of petty humor and does pretty well on it's own but a lot of the mystery of the story is destroyed if you're a .hack regular. However, I've found the characters hard to like and the main characters (Rena and Shugo) are both pretty annoying. Since it's so short, the plot doesn't span into a deeper level.
Was this comment useful?  Yes

Overal lmpressions
by holy`bell
June 20th, 2007, 5:18pm
Rating: 8.0  / 10.0
It may take some time before you fully accept the story and the characters through the first two volumes (as for me in this case), but once you read the last volume, you really love them for sure. Though I'm not a major fan of the .hack world, I agree with the positive things that sleet had said. This is my first time reading a .hack series, so I do not know how it fairs out with the other ones.
Overall, I quite enjoy reading this manga that I wouldn't mind reading it once more (or more) in the (near) future.

I have to be fair, though I'm a dot hacker...
by sleet
April 15th, 2007, 3:56pm
Rating: N/A
Though I am a dot hack// junkie, I have to be fair. I'm not all that pleased with how the series finished out. I won't give any spoilers though...
But honestly, I was upset, but overall the series is very good! Especially the last volume which I never regretted buying.
It may not fulfill all the expectations you may have. And once you get into the plot of it all, it's not the BEST out of the other plots within the dot hack// world. But it is worth reading if you are a fan. Since almost all the fans HAVE read it.

The series is pretty short. The new characters that appear, I'm sure you'll like them. If you're a girl, you will be pleased seeing Shugo and some other cute characters! swoooon<3
But like the genre states, this is SHOUNEN! Beware to see a lot of teasers for the guys out there! Everything is cute and the art style, you'll immediately admire. It's VERY funny, I'll give you that, and entertaining.

Despite my personal hopes of actually seeing most of the characters from the video game, I have nothing but good things to say about this series. So don't shy away from giving this a try!! You might not be 100% accomplished after reading, but I guarantee you'll be pleased! Boys and girls alike!
Was this comment useful?  Yes