Login to add items to your list, keep track of your progress, and rate series!
Description
• Harem Days
Madoka Mitsuru (Enman to his coworkers) is a rough ex-yankee, so he's not really sure how he got a job at a prestigious company. He works in "the harem", the name of the gofer department because of all the attractive ladies, under Chief Suzunari, a cheery middle-aged man who doesn't understand the meaning of personal space!

• Hareta Yoru no Hikari (Light of the Clear Night Sky)
Medical intern Chikada Tomoharu is always being called a "nice guy", especially when he's being dumped. When his lover dumps him by email, text message, and he's roughed up by the yakuza outside his apa... More...
• Harem Days
Madoka Mitsuru (Enman to his coworkers) is a rough ex-yankee, so he's not really sure how he got a job at a prestigious company. He works in "the harem", the name of the gofer department because of all the attractive ladies, under Chief Suzunari, a cheery middle-aged man who doesn't understand the meaning of personal space!

• Hareta Yoru no Hikari (Light of the Clear Night Sky)
Medical intern Chikada Tomoharu is always being called a "nice guy", especially when he's being dumped. When his lover dumps him by email, text message, and he's roughed up by the yakuza outside his apartment building he's having the worst day ever. Building caretaker Fukiage Tatsuru scares the gang off, and he and Chikada become friends. But does Tatsuru only see him as a "nice guy" too?

• Itsuka no Himitsu
It's been ten years since Yuuya was home. That was the last time he faced Asato, the blind neighbor he's always had a crush on. He's spent the time trying to forget the one night he acted on those feelings. But he's been fired and evicted; with no place to go he returns to his childhood home and the man he's never forgotten. 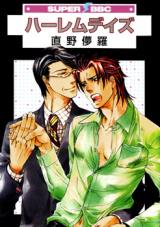 I love the final story!
by shinobipopcorn
December 24th, 2013, 7:31pm
Rating: 10.0  / 10.0
The cover story is hilarious, about a tsundere yanki who somehow gets a job at a regular company and falls in love with his boss. The harem girls make the story, since they give Madoka someone to play off (lol when they get mad). It's quite the departure from Naono's usual style, since the boss is the seme, but it's still great. The reveal at the end made me laugh so hard.

The second story doesn't stand out much, just standard yakuza/uke. I wish she'd do more yakuza stories, they're pretty fun.

The last one, though, OMG. It's an 11. A young man in love with his blind neighbor doesn't sound like much, but damn, it is hot, even with the minimal action. I feel so sorry for Yuuya, he works up the courage to apologize and confess just for Asato to misunderstand and cut him off. My favorite panel is the one where the two are back to back, echoing their thoughts. A sniffle every time!
Was this comment useful?  Yes

Itsuka no Himitsu!!
by Gattaca88
June 30th, 2012, 11:46am
Rating: 10.0  / 10.0
Oh, how I love Itsuka no Himitsu......I can read it many times without getting bored. Just the whole concept is super cute. First love is so beautiful, and even more beautiful when combined with a blind man with increased senses who has hungered for his next door neighbor for ten years. Loved it

but the 2nd and 3rd is far from my liking things except if their 'role' when having sex is not like this. Peace!

The story is good, the characters is good too. I love Bohra's style, so i never have a problem with her style manga. But honestly, in this manga, I couldn't give a high rating because this is not my favorite. Except the 1st that is MY FAVORITE!

:)
by whitespade
December 18th, 2011, 4:39pm
Rating: 8.0  / 10.0
seriously, only naono can make me read yaoi just for the story, the character and the plot, not because of the h scene. the h scene is hot, but im more into the story itself. these short stories are not really outstanding in any way, but still fun to read.
Was this comment useful?  Yes

Impressive...:3
by Sasageru
June 17th, 2011, 3:42pm
Rating: 10.0  / 10.0
So far, i've really enjoyed all of this mangaka's works. Her art style is beautiful, realistic, even a little grungy at times, and its wonderful. Plus, characters generally look the right age. Alot of manga no matter the characters age they keep smooth skin and hot bodies xD but this mangaka shows the discrepancy in appearance as the body ages - but in a way that can be appreciated.

Anyway, apart from being a little addicted to the art the stories are enjoyable :3 despite being generally short they hold a fair bit of detail and develop nicely, it doesent feel too rushed despite the length. I was impressed.
Was this comment useful?  Yes

Harem Days
by NightSwan
January 20th, 2009, 2:01am
Rating: 9.2  / 10.0
Since I have finally found the 2 other stories, I'll comment.
This is probably on of my favorite oneshot collections (double-shot actually) of Naono Bohra.
The art here is of course great, and the stories were really nice...
Plus, there were color pages! And she draws women so well...
All the stories were really cute, and that last page of the last story was "kyaa" :3.

Even though the stories had her usuall [spoiler]I love him but I'm sure he hates me/doesn't love me/thinks of me as a mere friend[spoiler] cliche, it was still very enjoyable. It gets old, but she's the queen of cliche XD.
Was this comment useful?  Yes

Hmmm....
by Poemi
December 29th, 2008, 4:36pm
Rating: 10.0  / 10.0
Somehow...I'm missing the first story, but I have the other two and the extra.... that's disappointing, because I really enjoyed what I read. The stories started out with some angst, but end very sweet and romantic. I really got into the characters. The art is very nice, too.
Was this comment useful?  Yes

Fantastic art & eye candy for readers with suit fetish.
by cut
April 1st, 2008, 4:27pm
Rating: N/A
The art is so good!!!
Plot-wise, it is less exciting compared to other one shots but the art evokes some of the cuter moments in the story making it worthwhile.
Was this comment useful?  Yes