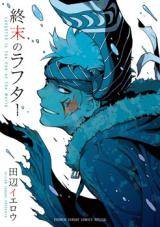 Deeper themes at work
by FeyPhantom
March 2nd, 2017, 10:16pm
Rating: 9.5  / 10.0
It's too bad this series was kept so short because it definitely felt like there was a much deeper story waiting to be told. The characters we're introduced to have more depth in the first few chapters than most shounen manga at their beginning. The entire story comes across as a "first arc/town/battle" of a much longer story.

I love the themes of humanity and prejudice, as well as sacrifice. Actually, the theme of fear is extremely well handled and showcases the sides that lose to their own fear, those that question it, and those that move forward in spite of it.

Even though it ends early, I'd still recommend it. I thoroughly enjoyed it for its art, characters, world and story setup, and the thinking it makes you do.
Spoiler (mouse over to view)
Luca's speech about fear and it being a pet you keep was my favourite part.
Was this comment useful?  Yes

Saw it coming, didn't care!
by arouraleona
December 10th, 2013, 3:21am
Rating: 9.0  / 10.0
I wasn't really surprised by anything in the manga, but that doesn't mean I didn't love the hell out of it. I adore Yellow Tanabe's work. Fantastic art, great writing. Can't wait until her next offering!

this should be a series!!!!
by whitespade
September 30th, 2013, 6:01pm
Rating: 8.7  / 10.0
why oh why? this has all the hallmarks of good shounen series with likeable but tough characters, superpowers, powerful creatures, etc...this should be a series! i would love to know more about these characters, and what would happen when they devour every akuma in the world. im so sad

Good, Though Short
by whistlebird
August 17th, 2013, 10:20am
Rating: 9.5  / 10.0
I love Yellow Tanabe's work (all that I've read so far.) She has beautiful, sometimes very simplistic but dramatic art, a natural sort of style, and the plot is always fascinating with many layers. Kekkaishi was the same way, though the art in this one was maybe a little better.

It was a little confusing here and there (could be the translation) but it all pretty much made sense eventually, and the twists were unexpected and well put together. The main character is the definition of cool (I love the outfit) and his sister is adorable, even if her face hard to take seriously. I guess that's the point though, they're perfect foils of each other, and their relationship is something I would have liked to explore more if the series was longer. The plot was also something interesting, and I got just enough of it to make me really think. I do wish it continued so the world could be expanded upon and the truth of these "demons" could be better explained, but I also think it was satisfying enough that I'm not left with that itch I get from an unfinished work that leaves too many plot-holes and dangling character arcs.

Really Good
by Meilee123
June 17th, 2013, 12:15pm
Rating: 10.0  / 10.0
Yeah yeah yea, it's short and I wished there was more but the ending was so good that I don't think it could be topped off.
The art was good and refreshing, befitting the mood.
The only thing it's lacking is the adventure genre because I think the setting is a little restricting but I still gave it a 10 because it gives such a great feeling.
And I don't see where the horror comes in.

Horror?
by blueshadows
June 2nd, 2013, 5:12pm
Rating: 10.0  / 10.0
If your reason for not reading this is because it's horror, you must have a wimpy stomach. If this is horror, so is Fairy Tale and One Piece, and certainly Bleach and Beelzebub.

Besides that, this has a beautiful message, and makes you think. It's worth reading, even if the art isn't that great, and i gave it a 10 despite my normal criteria. So read it. It's worth it.
Spoiler contains mild cursing.
Spoiler (mouse over to view)
That mayor and those townspeople are all as*es and f*ckers and should all go kill themselves because i swear, they make me so mad. Why does everyone judge after a stereotype? OMG Just because he's a demon does not mean he is a bad person. The little kid got it in the end. If i could go into that story i would strange that fat pathetic loser of a mayor, then proceed to demolish the town. People like that p*ss me off.
Was this comment useful?  Yes

Great
by Suxinn
January 12th, 2013, 7:01pm
Rating: 9.3  / 10.0
For those complaining about how short it is, I actually find it a pretty agreeable length, and I don't think it was axed or anything of the sort. I'm fairly sure that Tanabe Yellow herself decided to end it at one volume. And I can understand why. The storyline seems to be more episodic than not and there's really no overarching plot, which really isn't the mangaka's style. I think it ended at exactly the right moment, with enough glimpses at the world and the characters to make it memorable.

Having said that, I do hope that Tanabe Yellow revisits this world someday because I am certainly interested enough in it to want to read more. I'm definitely looking forward to that new series she has in store for us, though. I'm sure it's amazing!

(Also, no offense to Shoujo-Sense, but I would recommend reading Red Hawk and Imperial's scanlation instead. Their translation is more straightforward and easier to understand for the casual reader, haha.)
Was this comment useful?  Yes

WHAT??!!!
by letterbee96
December 25th, 2012, 11:46am
Rating: 10.0  / 10.0
^ That was seriously what I shouted when I saw the chapter cover of the last chapter. This manga had the potential to stand on par with the regular shounen mangas. It has the characters, the plot, and the feel. It's a real shame it's not a series... I would've been glad to follow it. This story setting gives a familiar atmosphere as a regular shounen manga but the depth of the characters blew me away. The relationship between the protagonist and his sister is priceless and that very fact is stated at the end of the manga. To be able to portray that in just 1 volume worth of comic with an additional story of the enemy is...amazing. Which was why I kept asking my screen, "WHY WHY WHY DID IT HAVE TO EEEEENNNNDDDD??!!! It was better than DGM!" But nonetheless, I am very grateful for such a wonderful read... Hopefully, sensei's next work in autumn 2013 would be just as awesome or even better!

It's great
by damiester
December 24th, 2012, 8:19pm
Rating: N/A
For the more perceptive readers, you will find this series amazing. It differentiates itself from the common shounen series despite having a very similar setting. Like Kekkaishi the author's previous work, most of the attraction lies in character relationships. However instead of a couple, the protagonists are siblings with incredible depth to their characters. One could never guess what emotions and thoughts lies behind their smiling faces. And even the conversation between them could be surprisingly deceiving.

Once again, if you're not prepared to invest a little into the series then you wouldn't see anymore to this story than you would Naruto. Tanabe Yellow's works reward only those who are intelligent enough to comprehend.
Was this comment useful?  Yes

Odd
by Lightbrand
December 24th, 2012, 6:28pm
Rating: N/A
Here's one of those stories where the author tries to be deep, only to have it backfire on him.
It uses the standard human/demon plot device dealing with discrimination, isolation, paranoia and whatnot. Like all other work using this trope, it asks the question of what makes someone human or demon and whether they appropriately bear the label of evil and good. This isn't anything new, but the author tried to make it serious, (whereas in Chobits for example, the issue was mainly for laughs with the serious bits hidden away as subtext that readers have to think a little to know its existence, that being the view on human/computer relationship.) Here we were told very early that this is no joke and the world is hell, but for me it just ended up being melodramatic and it felt too forced.

So we have our main character, "Naruto" showing up at "tutorial village", he's a "demon" who helps human fight other "bad" demons. Aside from what I wrote in the first paragraph, the first 5 chapters are textbook. When he solved the problem, surprise, surprise, the humans are the ones being unappreciative and Naruto decided to be the bigger man and just head off into the sunset.

Next week no doubt he would've showed up at a new place, or meets another demon in the wild or whatever, the story can pretty much write itself at this point. Except it ended. Not surprising because the plot device is nothing new, the mythos being told isn't that interesting (the origination of the demons and their final destination). But to be fair, while I would've cancelled this particular manga as an executive, I would've done the same thing to a lot off other titles that are still ongoing that are just as generic (Rosario Vampire) .
Was this comment useful?  Yes