Recently, Maiko has awoken to her magical powers that were asleep inside of her, but she has trouble controlling them. More often than not, she ends up completely naked and either unconscious or unable to move. Maiko's mother has assigned Yaida to be her guardian and mentor to train Maiko to be able to ... More...
Yaida Masaki is a part timer, working as a janitor in a large publishing company. His hobbies include fantasizing about other girls, masturbating, and creating cosplay outfits for his fantasy girl: Oikawa Maiko. She is the daughter of the company president, and a far away existance for Yaida.

Recently, Maiko has awoken to her magical powers that were asleep inside of her, but she has trouble controlling them. More often than not, she ends up completely naked and either unconscious or unable to move. Maiko's mother has assigned Yaida to be her guardian and mentor to train Maiko to be able to control her powers. Will Yaido be able to train her to control her powers and become a proper magical girl? Less... 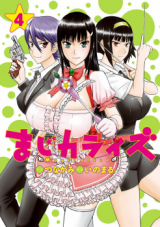 Scummy...
by Lost Rabbit
September 13th, 2016, 6:48am
Rating: 4.0  / 10.0
I mean, that's honestly the first word that comes to mind when I think of this series. It's not a burning trash fire like that of Kyochuu Rettou, Dead Tube or Holy Knight, but I really can do without the sexual assault going too far at times.

Now before anybody makes a snide remark at me for my idiotic complaint, I am indeed aware that sexual assault is the driving force of the story. For every incident involving it, our heroine's able to step in, save the lady in peril, and give the bad guy(s) his comeuppance. Simple standard plot, rinse and repeat for a number of chapters, each one with varying scenarios for further development of the heroine's powers and that of the relationship between the leads. My main issue is how sometimes with any "excessive" amounts of the disgusting behavior going on (that being the author showing us for a number of pages the girl being molested and nearly raped), the comeuppance always seems to be the same thing every time; guy knocked out from the heroine's powerful force, and/or left outside naked as some sorta pervert to be arrested. I'm not looking for these scumbags to be castrated, but really, it just seems so underwhelming sometimes how they deal with the situation. So that's where my frustration mainly stems from with the series, as it reminds me of the kinda doujins I usually try to stay away from...

As for why I stick with this series to begin with, it's a dumb yet somewhat sexy read to follow along with. A large part of that can be contributed to any scene with the heroine's mother and the male lead, as he manages to get away with a lot of stuff (involving him giving her "special massages") without it coming off as ill-intended, unlike that of the actual pieces of shit this series churns out each chapter. The romance here as well could be taking off at better rates, but a few moments like when they're together in the cabin are kinda nice.

Would I recommend this? Not really. The extended scenes of the main girls getting sexual assaulted + the guys never really getting properly punished has me hating this series at times, and so I can't be bothered to give it a glowing recommendation. But as far as there being a decent heroine to follow, a smoking hot MILF character, and some ridiculous scenarios where the girls where cute costumes provided by the male lead makes me willing to at least come back. That, and the series has already been completed, so I really don't mind following it till its eventual end...