Login to add items to your list, keep track of your progress, and rate series!
Description
After his parents' divorce, Kou moved to America with his mother. Ten years later, he's back in Japan to visit his father's grave. He runs into his cousin, Ryuusei, who took over his father's karate dojo, and whom he has not seen since he left with his mother.

Ryuusei has always been serious and proper, making it difficult for Kou to get closer to him.

One day, while the two of them were talking, Ryuusei suddenly kissed him.

Latest Release(s)
v.1 c.1-5 + Extra (end) by Memory for You & Dangerous Pleasure over 14 years ago
Search for all releases of this series 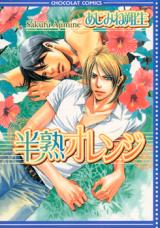 Yikes
by AeeDee
February 1st, 2016, 4:14pm
Rating: N/A
Exactly what I wanted - after reading about 150+ pages of a charming, slow-building story with cute fluffy moments: surprise non-con! The characters were perilously close to being decent people with respect for one another, but this is what I get for assuming the mangaka would do the ethical thing and not expect us to condone actual rape. Super not okay.

Spoiler (mouse over to view)
If only I had a dollar for every time a character blamed their horrible behavior on "I'm just so lonely" and "I thought I would lose you". Well you deserve to lose him, to be honest. I read carefully over the next pages following this exchange, hoping he would get some alarming wake-up call (like, "hey I did a really awful thing, I need to change myself" at the very minimum), but instead we get a watered down faux-pology ("I'm sorry, except I feel justified because of my strong feelings," basically) and a love interest that essentially shrugs it off after a small fight that's played for a laughs and an embrace. You're kidding. I realize this book is about a decade old now, but we all know better by now, don't we? Let's all collectively realize how awful this trope is. We need to bury it. Forever.

It's a decent enough story, otherwise. The art is actually very nice, the character personalities seem genuine, and there are some genuine laughs and endearing domestic moments. No part of it was amazing, but it was far from bad. I was hoping that, by the end of a whole volume, it would find a true moment of catharsis or reach its emotional peak. (You know, how a good story slowly builds to that "wow" moment?) But instead we get a clumsy stumbling finale born from some confusing comedy of errors, at the expense of butchering the ethics of the character I liked the most. The characters appear to have learned almost nothing, really, and they're not really much better as people. There's a theme or two that fails to really go anywhere, which is disappointing because all of these things were leading towards a strong point that failed to materialize in the final acts. What a shame.

Hilarious
by OmNom
October 25th, 2013, 9:25am
Rating: N/A
Haha that was actually a lot funnier than what I expected would be. The characters are so silly but in a good way, because the mangaka intended not to take them too seriously in the first place, thus the result came out very nice in the end. This has always been my ultimate choice of silly stories where the stupidity doesn't hurt my eyes. I also love the chibis, they're freaking adorable AND funny as hell. Gosh I haven't come across such entertaining chibi drawings in a while. However the cover art is totally misleading; I mean it just steers people away from the desire to pick up the series, completely. I wish that was done better. About the story itself, you could almost say there's nothing at all to write home about, but because of the silly humour the whole manga was saved, even upgraded to some degree. I can't blindly rate this manga only based on what I like and ignore its issues, but overall I did enjoy it, a lot.
Was this comment useful?  Yes

Great!
by Namiya
July 6th, 2012, 9:18am
Rating: 10.0  / 10.0
This has a great, interesting story, cute characters and beautiful art!
The men are just sooo hot! I love the relationship between the two, they're both complicated characters and I just love how it's such a drama because neither can clearly express their feelings.
Of course, the plot isn't anything unique or super special, but it's cute, bittersweet and funny, and certainly keeps you entertained to the end.
I wouldn't mind this being longer and more drawn out,
Spoiler (mouse over to view)
and it sort of ruins a nice story flow when a character suddenly outta nowhere has to force himself on the other without hearing him out but that is really nothing special in yaoi anymore!
but other than that, it's got everything!

Really Subpar
by Lu-chan
October 29th, 2011, 12:49pm
Rating: 3.0  / 10.0
It showed some promise at the start, the rivalry/father issues could have been interesting. But this is nothing more than your typical dull, clichéd yaoi, with uninteresting characters to top it all.

It got even worse towards the end with the unnecessary noncon as a desperate attempt to spice it all up, and that miserably failed as well. I enjoy rape fantasy kinks being written in mangas sometimes if it's well done, or at the very least ~hot, but this was neither.

And I've read too many mangas and yaoi to appreciate the poor excuse of a "plot" that is the childhood friends reunited.

Good
by Sasageru
July 5th, 2011, 4:43am
Rating: 8.0  / 10.0
Really liked this one :3 cute story, very nice art and the story isn't the cliche i'd expected it to be.I liked the characters and the simple setting. Its a nice gentle romantic story. Only thing that turned it a bit sour was the rape scene... silly Ryuusei getting all jealous over nothing.
Was this comment useful?  Yes

It's Alright.
by shininghero16
July 2nd, 2011, 11:05pm
Rating: 7.0  / 10.0
Well first, the thing that bugged me the most isn't much of a spoiler because it's under the categories section but, I really didn't like it. I just strongly dislike people being taken against their will. Especially if the person "declares" he's in "love" with the said person, how can he inflict such pain on a loved one? 0_o

Ignoring that peticular annoying aspect of the story, the art is very pretty and appealing to the eye. Ryuusei's cold personality also really annoyed me. It's like the guy has no emotions whatsoever. There's tons of Semes like that in Yaoi and I try to avert my attention from those types of manga.

I did find the overall story entertaining and well put together but that's pretty much all the story has going for it. If you have time to waste and can't find anything to read, try this one. It didn't quite satisfy my tastes but it has potential.

could have done more...
by torride
June 20th, 2011, 12:17pm
Rating: 8.0  / 10.0
the story is good, at first I felt the pacing was quite good but at the end I feel the ending was rushed or something....the build up of the angst was really nice and it would've soared higher with the drama thickening far more than it had (which is really short) in the manga. the other characters are excellent subject for character development since they're quite interesting the way they have been portrayed in the manga. It wouldn't hurt if the manga was also longer.....
Was this comment useful?  Yes

*ack*, unexpected non-con
by pleochroic
January 4th, 2011, 8:34am
Rating: 7.0  / 10.0
i really enjoyed the story until the non-con (this isn't a spoiler, but a warning). i know, it's BL and that sort of thing runs rampant, but it completely didn't fit with my concept of who ryuusei is (and he even SAID he wasn't gonna do that, and then he did it anyway). the manga would have been considerably better without that nod to BL standards for frustrated seme. aside from this, it's pretty nice, with unusually excellent secondary characters, and i really like the art too. i wouldn't have minded more chapters with more character development, because there's plenty of stuff touched on that could be spun into something interesting -- especially ryuusei could use that; he's a bit too "tall, dark, handsome, and silent".
Was this comment useful?  Yes

Ok
by MyMiso
April 4th, 2009, 2:36am
Rating: 7.0  / 10.0
The story is cute but the art was too masculine for my taste. I love bishies so when I see two manly guys hugging and kissing, it kinna weird me out. Other than that I have nothing against this manga.
Was this comment useful?  Yes