Login to add items to your list, keep track of your progress, and rate series!
Description
The story revolves around Haruki, the second of five siblings, and his four sisters: high schooler Mutsuki, middle schooler Yayoi, and grade schooler twins Uzuki, and Satsuki, who share a multi-unit apartment (danchi). While their life may seem monotonous, aside from the fact that Haruki's sisters don't give him a single opportunity to rest, lecturing him about every perceived mistake and playing tricks on him, Haruki still likes his life. 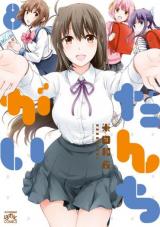 Decent
by tiankioo
October 20th, 2021, 11:19pm
Rating: 6.0  / 10.0
Not bad for a time-waster. It starts to get really repetitive after a while. The format doesn't allow for any depth to the characters beyond the surface, and the setting stays as small in scope as it was in the beginning. Aside from it being home life rather than school life, it's inferior in pretty much every way to Seitokai Yakuindomo. If you're drawn by the "romance" in the genre, don't bother. Beyond the typical "She's my sister, I can't think like that!" gag, or the obvious bro-con gags from the tsundere younger sister, it doesn't do anything else.

Well, it's readable
by Seregosa
October 18th, 2018, 5:09pm
Rating: 6.0  / 10.0
Readable but kinda boring at times slice of life 4koma that manages to miss with 95% of its jokes. What rubs me the wrong way is how it tries to be too cute and displays a way too unrealistic relationship. I feel like they lack personality, all of them. Seriously, it feels so stupidly out of place and unlikely that I can't help but thinking that the author either knows nothing of what a family with siblings looks like or he's just has a great incest fetish and this family setting was the best way for him to display it since it's basically just yet another one guy many girls thing where all the girls love the mc.

It's just that it's way too obvious and it's like the author is trying to shove it into our faces that the girls love him. It's just so unnatural even for a slice of life comedy manga. This in turn makes it much less enjoyable. I'm not sure what to say, perhaps it'd be more enjoyable for those people who just can't get enough of incest and are just reading it for fetish kicks instead of reading it searching for good comedy and characters. Not having even a single sibling might also improve your enjoyment as you won't notice the glaring impossibilities and excessively ridiculous personalities and relationships that you'll find here as much as someone who does have sibling/s. Manga aren't supposed to be realistic, obviously, but it has to follow certain rules nonetheless and since this one doesn't do so, I just can't seem to like any of the characters as much as I'd like to or feel like they're truly "alive".

Must read in slice of life genre
by tejasrinivasvk
May 27th, 2018, 5:20am
Rating: 10.0  / 10.0
Super cute manga. There are slight hints that older sister might be into MC and vice versa. Younger sister, has obvious hots towards MC and is tsundere. No ecchi/fan service. 10/10