Login to add items to your list, keep track of your progress, and rate series!
Description
Marie is trapped in a horrible situation. She's being constantly tormented by her classmates and regularly molested by her teacher. With nowhere else to turn, she finds herself asking for supernatural help from one of the seven demons of the seven mysteries of her school. All she desires is the death of her cruel classmates and teacher. How far will Marie be willing to go in order to achieve the murders that would free her from her living hell? 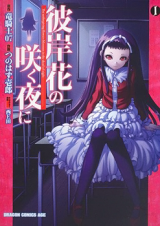 Flawed, but not meritless
by Venatius
September 26th, 2014, 11:27pm
Rating: 6.0  / 10.0
Starting off with the problems: The characterization is a little one-note, and the theme (bullying, at least by my reading so far) is hammered relentlessly. I understand a work having a central idea or theme can be a very good thing, and that's a fine topic, but it's tackled in a really hamfisted, caricatured manner. On the good, the atmosphere is quite well maintained, and I rather like the art by and large, which introduces some wonderfully surreal visuals. The premise (a focus on episodic stories centered on the various youkai haunting a school and their interactions with humans and each other) is one I quite like, though.
For reference, if you want to get ahead of the translation as it is at this moment, OR if you are especially sensitive to the subject of sexual assault: You MIGHT get some mileage out of the visual novel adaptation. As this manga's author is a pretty well-known VN creator (well, "sound novel", technically), he made a VN adaptation of this manga, which tones down the explicitness of quite a bit of the more grim elements. (Yes, the manga came first, as unusual as that seems to be.) There are only two parts of the VN out (and I'm not sure if they cover the whole manga, though each does tackle multiple chapters), but they're fully translated, and at present, the manga translation hasn't caught up to them. Whether the change of medium (and the switch back to the author's trademark squishy sausage-finger people art) is worthwhile is up to you, but it's an option!

The manga itself isn't bad aside from the unrealistic attitude of the teacher. The premise is actually interesting and the art is far better than some other VN-to-manga adaptations.
As the one who already read the Novel, I can say that this manga leaves quite a lot from the original but you still get the general idea of it.

For those who likes dark story and horror, give this one a try. Although I should warn you that in the first few chapters, it's filled with sexual abuse. The sexual content itself isn't overbearing, quite tame even, but the violence is probably a bit too much since it's directed at an elementary student.
Was this comment useful?  Yes

Good horror, bad buildup
by imercenary
June 8th, 2012, 2:54pm
Rating: 5.0  / 10.0
Theres not much to say here. This is a typical "(horror) monster of the week" story pattern except that every "episode" is too long. If you read the entire arc all at once, its pretty good. But if you read each chapter as they come out (not to knock the scanlators either since this is an ongoing manga) the story can be astonishingly boring.
Was this comment useful?  Yes

Found myself liking it even though I really didn't want to
by Anabiotic_Pineapple
June 6th, 2012, 6:57pm
Rating: N/A
I won't give a rating for this as I'm not really sure how to even begin. As far as art goes, it fits the mood of the story. The violence portrayed is certainly done with lines that suggest eroticism (in the vein of guro), so it can be extremely uncomfortable to read at time. In fact, I wish the art was a bit worse than it currently is so less of that would be going on.

The characters presented are mostly horrible caricatures of people in real life...when you first get introduced to them that is. Ryukishi has this way of introducing you to a character by presenting only one side to them and only through the story progressing does the complete picture begin to take shape. Sometimes the direction he chooses falls flat, but that only serves to make them more believable as a character imo. The same thing happens int his manga. A lot of the characters seem completely absurd, but as more and more is revealed, the larger picture is revealed and you find yourself thinking back on earlier events and looking at them in a new light.

The story is a bit confusing but as things move along, I suspect more and more will start to make sense. That's the way his stuff usually plays out, you learn one thing or think you got one thing figured out, and then you either learn more or you don't. At the very least, he usually gives enough info to piece together something that should work, which is part of the fun imo.

As a baseline, while never outright "hardcore" in that you can see genitalia, some of the stuff is pretty gruesome. If Tokyo Akazukin is used as a baseline for sexualized violence in a manga, then I'd say this series is about one or two notches below. The art is more suggestive than anything, and the things it manages to suggest are pretty disturbing.

That being said, if you can stomach it all and can live with being confused for most of the ride and then arriving at a horrible destination when it finishes (I'm assuming it won't be a "happy end" by most standards...but something will certainly be resolved), then I'd suggest reading it. What I said might not be the most convincing way to get people to read this series, but if all of the above applied to you in the least when it comes to finding manga to read, then you'll probably like this series. It's guaranteed to be a wild ride.

delightful
by whitespade
December 7th, 2011, 3:02pm
Rating: 9.0  / 10.0
i really love the art. its so...squishy, the droplets of tears feel extra gooey, the flesh of a child look soft to the touch,the scream of anguish sound very terrible. i look forward to know the whole wonders of the school!
Was this comment useful?  Yes

Build up is tedious/irritating
by philip72
September 19th, 2011, 11:52pm
Rating: 4.0  / 10.0
I understand what the author's attempting to do here; but the build up is way too long, the villainy too cartoonish, and the constant assault on the protagonist became tedious and irritating.

Cutting down chapters 1 through 8 by half would have made a much better story.

So unless you're a maladjusted little twitcher with anger and mommy issues, you'll find this isn't the "BEST sick-psycho-horror ever"; and it's certainly no Franken Fran.
Was this comment useful?  Yes

Just wasted 30 minutes of my life......
by thebestie09
August 21st, 2011, 8:32am
Rating: 1.0  / 10.0
I read this because I liked some of the authors other works but I was sadly disappointed. I have only read the initial volume so the series has the potential to get better but I have found the art to be messy unorganised and confusing. The plot one volume in has gone nowhere this should change with more volumes. I do find the stories and characters so far to be woefully unrealistic but am keeping in mind the fact that it is a manga i am reading. So readers should be aware of the disturbing nature of this story . Read the tags - if these topics disturb you don't read it!
Was this comment useful?  Yes

not enough material to judge at the moment
by MewMan
July 14th, 2011, 9:44pm
Rating: 7.2  / 10.0
this is a new series from the creator of Higurashi and Umineko, so the sickness is expected(though personally i think it's of a higher level since it involves rape and the art is definitely traumatizing with wild eyes and buckets of sweat, tear and muckus)

only 6 chapters are scanlated at the moment, and the game has not even begun. i recommend everyone to come back later when there is a story to talk about.

Worth your time
by himjl
July 14th, 2011, 3:46pm
Rating: 10.0  / 10.0
One of the best new manga series out there from a bonafide genius. The only reason I'm commenting on this is because I just read a few of the latest reviews and it disgusts me to see a masterpiece like this trashed by people who want nothing but slice of life and happy endings. If dark moods, fictional injustice and originality are too much for you then please ignore this manga and go watch Finding Nemo. Gender has absolutely nothing to do being able to appreciate a work of art and warning females against it is nothing more than your own self-deprecating sexism.

The illustration are complex and intricate, it's quite obvious that the author spent a lot of time on them. Again, if you can only tolerate one style of artwork then do not read this manga.

This manga is absolutely worth your time and effort to read. It's frightening ("traumatizing" according to the last idiot that posted here), dramatic, surprising and above all well done.
Was this comment useful?  Yes