Out of nowhere, a Japanese elementary school is transported out of the world they know, and into a nightmarish wasteland. Have they gone to another planet, or is this toxic world actually a vision of Earth's future? Soon, the students and teachers must struggle to survive in impossible conditions, besieged by terrifying creatures and beset by madness. Part Lord of the Flies, part post-apocalyptic science fiction, The Drifting Classroom (1972-1974) is a classic can't-put-down manga series. It was adapted into a Japanese live-action movie (1987).

Out of nowhere, a Japanese elementary school is transported out of the world they know, and into a nightmarish wasteland. Have they gone to another planet, or is this toxic world actually a vision of Earth's future? Soon, the students and teachers must struggle to survive in impossible conditions, besieged by terrifying creatures and beset by madness. Part Lord of the Flies, part post-apocalyptic science fiction, The Drifting Classroom (1972-1974) is a classic can't-put-down manga series. It was adapted into a Japanese live-action movie (1987). 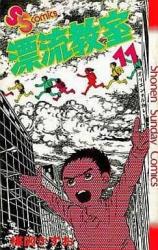 Note: You must be logged in to update information on this page.
Forum Posts Click to view the forum
Drifting Classroom Finished.
over 12 years ago
the drifting classroom film.
over 15 years ago

Lots of flaws
by JapanRocks
December 16th, 2019, 12:41am
Rating: N/A
Lots and lots and lots of flaws, but I loved it. There's too many coincidences, not denough joy between the tragedies, the author seems to give up some plot points completely, leaving the reader not really sure of what exactly is happening, the characters seem to flip flop between rational and irrational, and the message is too hamfisted.

But considering when this story originally came out, the message wouldn't have been so cliche as it seems now, so that's forgivable, although some parts still made me roll my eyes. As someone else said, the story implies that the kids are just a few decades into the future, but some of those things clearer require thousands of years to achieve. Pollution can't explain everything away. Anyway, all those flaws don't matter, because I enjoyed reading every minute of this story. High recommendations if you're able to suspend your belief.

Could have been more
by Leu
March 5th, 2019, 10:01am
Rating: N/A
Its a pretty good story, but it looses focus along the way and the drawings most of the time are just redrawings of the same character at different zooms in the same angle, just go a check it out, if you haven't noticed now you can't unsee it.
Was this comment useful?  Yes

Quite nice, but...
by jo2ukeGappy
September 21st, 2016, 10:22am
Rating: 9.0  / 10.0
This is great in it's own way. The concept of the kids vanishing to the future and being stranded alone, having to deal with all the hardships of a deserted earth is great, and terrifying in a unique way. The only major thing that bugs me in this was
Spoiler (mouse over to view)
the monsters that were created through one of the school's children subconscious.
This is a major let down, seeing how all of the other plot points seem to tie together to form a well thought out storyline. Other than that, this is great, and even this little defect wouldn't stop me from recommending this to anyone.
Was this comment useful?  Yes

A Classic Horror
by Aika
April 19th, 2013, 5:59pm
Rating: 8.0  / 10.0
Good for it's time. I fully understand the concept of this story. However there's something to note rather than this manga being a "horror", it's more to an adventure, tragedy and psychological kind of manga.

Second thing I'm about to mention here is the ending. It doesn't matter how good the story was at it's earlier chapters, a good story MUST be paired to a good and reasonable ending. After years of reviewing the same, I'm not really surprised to know that my thoughts has always stayed the same. The mangaka, ineed, rushed the ending and it's like he wanted to finish this work quickly. I'm gonna be honest here, the ending doesn't reach the standard from a good manga that was created by a well-known horror mangaka, Kazuo Umezu.

On the other hand, I find this manga to be a rare and truly a masterpiece for it's category. It's rare to find something as solid as this at these days. It's the thrilling that really got me. Drifting Classroom never failed to caught my attention, I've stayed tune with my heart beating. I'm staying to see more of it's ridiculousness. Which later on, I got myself disappointed for having a high expectation for the ending.

A good and solid classic "horror" manga that I'd recommend for the horror manga lovers. Overall, I'd give this 7.8. Minus the rushed ending.
Was this comment useful?  Yes

Very addictive
by Leosten
March 29th, 2012, 7:50am
Rating: N/A
I think this is a very good horror manga, although it's true that you need to be open-minded to fully appreciate it. The greatest aspect of this manga is the powerful feelings conveyed through the situations the children have to face. Rationality is out of place in such a twisted setting, and we can only sympathize with the children, who are just what they are supposed to be, terrified and lost. It's a classic of survival and post-apocalyptic manga and is definitely worth a read. The ending, however, does feel a bit rushed, but it doesn't take out the pleasure of the whole story.
Was this comment useful?  Yes

Old school horror
by barbapapa
December 23rd, 2010, 6:33pm
Rating: 10.0  / 10.0
I have to admit I needed to give this manga several tries during the years, before I finally managed to finish it. It really requires a certain openmindedness, more than other manga you need to enter even a state of childlike "make belief" to buy some of the harder to swallow parts in the beginning. If you can manage to do this, it's a pretty addicting read that never slows down once it kicks off. Seeing how this was written in the 70s, predating the huge horror boom that was seen in the 80's, one can imagine how groundbreaking this was at the time.

People just don't seem to get this series
by Pediatricia
November 16th, 2010, 8:11pm
Rating: N/A
Kazz Umezu, the author, had once stated (I think in the interview in the back of volume 11) that many of these elements in the story haunted him as a child- and still do to this day. This is a ludicrous story, it's absolutely insane, makes close to no sense, yet it doesn't make fun of itself, even in spite of its absurdity.

And yet, people overlook the fact that, as adults, we'd find this stuff 'kind of creepy' now, if we were Sho's age or younger when we read this (I actually was a 6th grader when I first read through this!), we'd be shocked, horrified, probably lose sleep for days. The point of Drifting Classroom is- it's a childish tale, pure and simple- it doesn't have to make sense. That's the whole point- Sho is still a child, he's telling this from his childish POV, this story is about (really) being able to connect with that guillibility of youth, the untouched innocence that we all once held- Sho and the children are able to survive because they're still young, and able to accept these things- they make no sense to us adults/older people- but to these young kids, who are able to adapt to the most hellish surroundings, they are quickly able to accept their fates.

This is a story that forces you to think about what you feared as a child- your parents disappearing forever, being thrust into a horrible scary nightmareworld, being attacked by monsters, being left alone and forgotten...That's what Drifting Classroom is REALLY about. Not blood, not gore, not "omg Y IT DOES NOT MAEK SENS TO ME!111!" this is a true horror story- the fears we all experienced in our young lives come alive here.

It's a good manga- really absurd, and practically ZERO logic, and I'm rereading the series- it's addictive and quite a fun escape from reality.
Was this comment useful?  Yes

Ridiculous and quite bad
by Aikanaro
October 16th, 2010, 2:26am
Rating: 4.0  / 10.0
In many ways, this is the most retarded thing I've ever read. I think it's meant to be serious and wants to be taken seriously, but it's too ludicrous for that.

There's also something very weird in the pacing. I can't put my finger on it, but it was like it was moving at breakneck speed all the time without slowing down to connect with anything. I'm not really sure if it was like that, but I certainly didn't connect with anything - in better hands, it could have been poignant. The characters are never really explored and don't develop much. Everyone who isn't in the established group of protagonists keeps doing inexplicably stupid and psychotic things.

It missed a lot of opportunities to be an effective horror story. Felt kind of like a half-hearted version of Uzumaki. It could have been good, but ... y'know - who cares about body horror that's happening to someone that we hardly know? If the character had been developed more effectively, it would have been good - Junji Ito has the same ludicrous-nonsense thing going but still manages to make it good horror by good characterisation and such, so it's not just the silliness that's the problem.

The survival aspect is better, but if you don't care about the characters then it doesn't matter much whether they die or not - and when they die because no one but the protagonists can string a non-psychotic thought together for the entire story it really doesn't leave much of an impression.

Uh, anyway - it wasn't completely bad to read, but I wouldn't recommend it. It's just too stupid.
Was this comment useful?  Yes

terribly dumb and nonsensical
by takitogr
April 19th, 2010, 4:26pm
Rating: 2.0  / 10.0
during the first 2-3 volumes i thought this was a cult gem...i had some real hysterical laughs at the stupidity and the oddity of the whole thing but then it dried up...with all these screaming faces and punches and abnormal outlandish reactions this was quite a laugh..also the way adults were portrayed in the first volumes was insane...."the moon!!! this is not how the moon used to be....i've turned insane now...i'm going to kill some kids"....i thought i was watching a b-movie but a genuine b-movie not some pretentious crap which wants to be called b-movie..something that was taking itself too seriously and thought it was great but it was terribly bad and you couldn't stop laughing at all the effort to desperately deliver some dramatic tension and what not...i can't wait to finish this so i can read somethin else...this is definitely not for ppl who want a good story...it is maybe a nice glimpse in the past as to what was considered good (maybe it was shocking at the time) and you can see it influencing modern horror manga titles nowadays...other than that it doesn't hold any interest for normal folk who just want to read a nice storyline...this is seriously childish stuff

see what i mean? it doesn't make any sense this manga...dozens of times you'll say that per volume