Latest Release(s)
v.1 by Manga-Sketchbook over 16 years ago
Search for all releases of this series 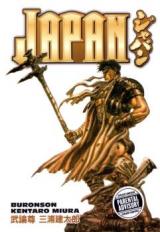 A very quick read
by masshiro.agata
July 1st, 2021, 12:54pm
Rating: 6.5  / 10.0
It's a very short read since it's just one volume and with very little text, it's mostly action, therefore it's not boring and doesn't require concetration to read. The art is great. I enjoyed reading it when I was too tired mentally to focus on something more complicated. It's not an awesome manga, story or character wise, though, it's too short to develop those.

N/A
by Toto
May 24th, 2012, 11:27am
Rating: 1.0  / 10.0
I find it funny that a former yakuza is complaining about the remaining Japanese people becoming refuges and bandits. Sure, being refuges is not optimum, but yakuza are bandits... they're just modern bandits. So, why the hell is he complaining. Fun. The hypocrisy throughout is such fun.

Oh, what takitogr said about Jesus... he was not kidding. Impotent Jesus is here, and his name is Azuma.

In other words, this is a gag manga from the get go.
Was this comment useful?  Yes

garbage
by takitogr
July 8th, 2008, 11:52am
Rating: 2.0  / 10.0
this is really crap...the entire plot and especially the execution is horrible and laughable...thanx to that i had some nice laughs in the start of the volume (it's not supposed to be a comedy....it's really cheesy....it tries to provide a moral lesson to japanese people to not boast about their good economy and their developed country in general, but fails miserably...the characterization is the most horrible ive ever seen...characters seem as two-dimensional as paper cutouts....and it has jesus inside! no, i'm kidding but u know what i mean if u've read m-s version of the manga...lol
Was this comment useful?  Yes

Perhaps too short
by AKLR
March 6th, 2008, 7:06am
Rating: N/A
This is an ok manga but it ultimately focuses slightly too much on action and at the end of the oneshot hasn't developed it's characters or themes quite as much as it could have.

Perhaps most interesting is the fact that the story seems to combine elements from both of it's creators. We see elements of Buronson's other work in the post apocalyptic elements (Fist of the North Star) and the themes of Japan's need to reform (Sanctuary). Similarly artist Kentaro Miura's primary work Berserk is evoked slightly by the mainly medieval armoury and bulky protagonist.

Ultimately I would advise that those living in countries where it is not available (or dare I say it, those who are not phased by violations of copyright law) download it in some form if they are really curious. As for those living in coutries where the manga is sold I wouldn't recomend paying particularly much as the short story ultimately doesn't have the push that can keep a short oneshot engraved in one's mind.
Was this comment useful?  Yes

Japan
by Mastermanaster
May 5th, 2006, 4:20pm
Rating: N/A
This manga is from the guy who has drawn Berserk, so for Miura fans it might be worth a look. I thing this Manga is nothing special and not really good. If you have nothing else to read give it a try or don't...
Was this comment useful?  Yes