Login to add items to your list, keep track of your progress, and rate series!
Description
From Viz:
Sad at the thought of spending Christmas alone, Kurumi goes out for a walk. While she’s crossing the street, a boy bumps into her and a rein suddenly appears that binds them together. The overjoyed boy tells her she’s his master, and that she’s a Santa Claus. Kurumi dismisses him as a crazy person, but then he transforms into a reindeer?!

From Dragon Voice Project:
The first three chapters are about this cute "couple" and the last one is a oneshot called Amai Kamiato.

• Amai Kamiato -
Ren is a "tame" vampire and currently spends his lifetime with a detective as blood donor whi... More...
From Viz:
Sad at the thought of spending Christmas alone, Kurumi goes out for a walk. While she’s crossing the street, a boy bumps into her and a rein suddenly appears that binds them together. The overjoyed boy tells her she’s his master, and that she’s a Santa Claus. Kurumi dismisses him as a crazy person, but then he transforms into a reindeer?!

From Dragon Voice Project:
The first three chapters are about this cute "couple" and the last one is a oneshot called Amai Kamiato.

• Amai Kamiato -
Ren is a "tame" vampire and currently spends his lifetime with a detective as blood donor while in return he helps her investigate at night. Then suddenly, the most unimagineable thing happens: Ren's daughter Maia appears, but vampires can't have children!

Note: there's a side story of Penguin Kakumei in Vol.3, which hasn't been scanlated. Less... 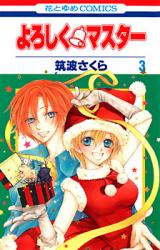 Note: You must be logged in to update information on this page.
Forum Posts Click to view the forum
Continuation!?
over 14 years ago

Most of the series is actually either set in christmas or a beach episode (oddly). So the series actually has these big time skips per chapter. They essentially spend i believe 2 Christmases. Maybe 3 im not sure. Point is the series isn't all that memorable. Its short and fun when you read it but their is practically nothing fancy about this series. In a sense it reminds me Ao haru ride but even Ao haru ride had good character development and something unique to it. In here its christmas... or a beach episode.

I liked the MMC tbh. He was the forward and kind type. He had good chemistry with the FMC. The rest of the cast was also fine. The black Santa Claus (racism i know), did the sterotypical bad but not that bad kinda stuff. There was some weak love triangle near at the end as well.

The romance was nice but the problem lies in the ending. Its not good. Like i guess its obvious you know. But its still dissapointing how the author decided to leave a relative open end instead.

TLDR: It was decent and fun till the ending. Quite sad too. The oneshots that came with it weren't much better either. 5/10
Was this comment useful?  Yes

Cute Read, Bizarre Concept
by NoOneSpecial75
August 1st, 2015, 5:43pm
Rating: 6.5  / 10.0
The concept is rather strange, but it makes more sense when you know it was originally created as a oneshot for a wintertime issue. I kind of think it would have been better off staying a oneshot (it feels weird stretching this story for 3 whole volumes, with summer & christmas as the two switching themes…) that being said, Tsukuba's art is pretty and nicely toned, and at least the concept has some originality to it.

The 'Sweet Bite Mark' bonus story was an early work and features rougher art and a slightly cliched vampire plot.
Was this comment useful?  Yes

Nothing special.
by moonmystery
July 20th, 2014, 12:55am
Rating: 6.0  / 10.0
This story was somewhat weird....and we never really get to see the interactions that make the characters fall in love with each other. But, the premise is pretty good and the art is nice too.
Was this comment useful?  Yes

wow!
by dreamit.
March 13th, 2013, 1:40am
Rating: 9.0  / 10.0
I am so surprised that I like this manga! I thought it was goin to be lame and corny. Not to mention I totally judged it by the plot description. I was wrong! This manga was so cute! It was very unique and I love their relationship. It's so simple but so strong without all the mushy words and cliche situations. I really enjoyed it! It seems like it's not complete though! I read the end of volume 3 but it doesn't seem like it's done, unless that's how it ended? Hmm nevertheless, quite enjoyable!
Was this comment useful?  Yes

Much better than expected
by whistlebird
June 8th, 2011, 8:47pm
Rating: 9.5  / 10.0
When I read that it was about a girl Santa, I though it might be lame, or too silly or just... weird. But actually, it's one of the better mangas I've read, and way cute. It does have quite a bit of unlikeliness, like her age staying the same for more than three Christmases, or the fact that santa and reindeer have to kiss to remove the leash every year when usually santa isn't a girl, or I guess the fact that so many people readily accept the santa/reindeer story when she tells them, but I'm sure the author was well aware of these things and did it purposely. Either way, I ended up not minding those details a bit because the art is gorgeous, the story is adorable and sometimes intriguingly mysterious, and it's clean while keeping up a romance. And oh, my goodness, Kaito and Aruto get many kudos for being the most beautifullest bishies I ever seen (squee >o<)!

LOL- it made me laugh <3
by sandyatthebeach1
May 1st, 2011, 9:33pm
Rating: N/A
I love literally all of Sakura Tsukuba's works. This one is super cute, and it made me laugh, too. It's light-hearted, and I love the concept! The plot is pretty cool. The guy is hot, the girl is pretty, and it makes me happy to read. 10 definitely! Highly recommended for anyone who likes shoujo- this is cute, sweet, and will definitely make you smile!
Was this comment useful?  Yes

Omg, that guy can turn into reindeer

omg, the storyline is sooo smooth and I love the relationship those two.

It's cute and I don't want to comment much, I want to read now, bye2 xD
Was this comment useful?  Yes

Awesome
by Anumine
June 15th, 2009, 8:29pm
Rating: N/A
The series is brilliant. I love the characters; and the art is beautiful.
For me personally, I would love to see Sagara and Kaito deepen their relationship xD I heart romance ;D

Sakura's other two series was picked up by CMX, hopefully they'll do the same with this one >.< Keeping my fingers crossed <3
Was this comment useful?  Yes