Login to add items to your list, keep track of your progress, and rate series!
Description
At Grace Field House, life couldn't be better for the orphans! Though they have no parents, together with the other kids and a kind "Mama" who cares for them, they form one big, happy family. No child is ever overlooked, especially since they are all adopted by the age of 12. Their daily lives involve rigorous tests, but afterwards, they are allowed to play outside. There is only one rule they must obey: do not leave the orphanage. But one day, two top-scoring orphans, Emma and Norman, venture past the gate and unearth the horrifying reality behind their entire existence. 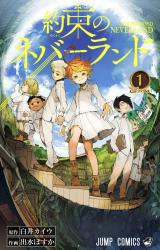 started off really great
by hugeboy33
November 25th, 2021, 6:39am
Rating: N/A
I agree with some other reviews; it started really well. The first arc was thrilling, we really felt how much of a danger they were in, and how they were really determined to get away. After that, it became stale? It was boring and no significant character development. The journey even felt too easy for them. I do not care about the insane devil bootlicker dude, it felt like he was just there, despite him supposedly being some sort of mastermind.

Honestly, I am not big on how much this manga shoves the concept of Family is Everything and I am Not a Murderer Like You (basically the protagonist) to the readers' faces. Everytime they were about to make the decision, they always fight about family, morals, and stuff like that. It was too overdone and had no depth whatsoever.

I never once felt my heart becoming warm from the family, trust, etc moments, because (I think) the author just outright wrote it in the dialogue along with some dramatic moment, not through the, for example, characters' actions or smaller details. If anything it felt corny, shallow, or boring. (It could just be me though!)
Was this comment useful?  Yes

Good but why the sappy ending ?
by MemeYakuza2019
October 30th, 2021, 12:44pm
Rating: 7.9  / 10.0
Spoiler (mouse over to view)
Seriously why did Emma go back to everyone when she forgot who they were due her promise with Him, it
just makes the promise pointless since Emma reunited with her family anyway making the whole "lose something important in exchange for the promise to work" unnecessary
other than that the ending was okay

AVOID SEASON 2 OF THE ANIME
by DR MUHAMMAD
March 26th, 2021, 4:02am
Rating: N/A
Man the 2nd season anime butchered up the manga in the most brutal way ever.
The manga is a good read.

Frustrating
by tremofx
January 6th, 2021, 6:33pm
Rating: 5.0  / 10.0
Before the escape we're golden but as soon as we're out it's basically a below average battle manga. It just loses everything mysterious and becomes too telegraphed to care for. Like it felt like nothing was planned past the escape. Sure they built a world but the story is so uncompelling and feels unthought out plot point to plot point.
Was this comment useful?  Yes

incredibly writing, story just gets better
by APOKOLYPES
November 20th, 2020, 12:08pm
Rating: N/A
no plot detail is inconsequential in storyline this mangaka writes, amazing how seemingly minor details end up having relevance later in story
Was this comment useful?  Yes

Disappointed so much.
by antid0te
July 30th, 2020, 8:28pm
Rating: 6.0  / 10.0
Yo, I have read the manga through the anime as many population. I liked the first arc so much it had really nice thrilling athmosphere, great character development also good story telling. But I do not know did someone threat the mangaka or something like that because I can't wrap this my head around, the mangaka really sucked after first arc.

The last chapters were overly dramatic with deaths .Up to what I see the author had in mind what characters would die and had this so fixed that the plot goes down completely if any of those more "relevant" characters had survived or died before they over-lived their usefulness.(She has ended up having an unmovable story line)

She has also killed off some other characters to give dramatism (this is a trope I don't like) .

All in all everything else in this manga is great but I don't think I will enjoy reading it whole again .

(the prologue chapters are terrible)

This is a great psychological thriller!
by chaechaeboi
October 23rd, 2019, 1:34pm
Rating: 10.0  / 10.0
That is if you can handle dark themes. There are many plot twists, heart wrenching moments, and heart warming moments to even it all out. I'd recommend this to people who like good hearted characters in a corrupt world or to those who like mind games and suspense.

Incredible first arc (just "ok" as it goes on tho).
by WhipNaeNae
October 23rd, 2019, 12:56am
Rating: 8.0  / 10.0
It got less interesting as it went on imo (but never bad). But it still deserves the rating for just how fantastic that first arc was. I was seriously on hooks reading it. Twist after twist. Nearly gave me hypertension lol. I definitely recommend it. Who knows maybe you'll enjoy the later arcs more than I did.
Was this comment useful?  Yes

Amazing
by aarya188
June 17th, 2017, 12:32am
Rating: 6.0  / 10.0
The setting of the manga is established in first chapter itself. And after reading one chapter I knew this series is going to be great. So, try the first chapter atleast to witness the magnificent art and gorgeous color pages. Its extremely fast paced and intense throughout. With each passing chapter there are new developments, plot twists, mind games and subtle character development. There has never been a dull moment in the 43 chapters I have read so far.
Was this comment useful?  Yes