Login to add items to your list, keep track of your progress, and rate series!
Description
Wimpy Sena Kobayakawa has been running away from bullies all his life. But when the football gear comes on, things change--Sena's speed and uncanny ability to elude big bullies just might give him what it takes to become a great high school football hero! Enjoy all the bone-crushing action and slapstick comedy that this heartwarming coming-of-age story has to offer. 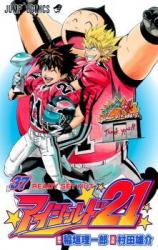 DEVELOPMENT
by Cryvern
July 5th, 2020, 4:51pm
Rating: 10.0  / 10.0
Best sports manga (and one of the best of any manga genre for that matter). Absolutely love the character development, story progression, art improvement (Murata a god). Hiruma best
Was this comment useful?  Yes

Best Sports Manga
by yukis2cool
July 23rd, 2015, 12:36am
Rating: 10.0  / 10.0
I'm sorry Haikyuu!!, Daiya no A, Baby Steps, and Oofuri, but Eyeshield 21 is the perfect mix of training, hard-work, teamwork, character diversity, and intense games in a sports manga for me. (Not to say that those forementioned aren't excellent.)
Was this comment useful?  Yes

Inspiring!
by Moonpuzzle
November 23rd, 2013, 1:22pm
Rating: 10.0  / 10.0
I have enjoyed this manga to the fullest (not to mention the occasional doujinshi possible moments that are made). It is both inspiring and educational. Whenever I read it, I have the tendency to find my own football and throw it around...sadly I don't own such a ball and they are really expensive (at least for me at the moment).

I recommend this to anyone interested in sports or need something to get their blood going.
Was this comment useful?  Yes

Very Good
by tnwls523
August 28th, 2013, 9:12am
Rating: 9.8  / 10.0
Very good sports manga. Solid plotline but above all amazing set of characters. Definitely one of my favorites now. Only thing I'd have liked was for the mangaka to describe Hiruma's background more. Oh and contrary to what everyone else said I actually enjoyed the last arc but the final chapter did feel a little...flat.

Overall I am happy to have read it, and to find that it has stopped. The last 150 chapters or so were a bit of a drag.

Unforgettably GOOD
by letterbee96
June 20th, 2012, 9:05am
Rating: 10.0  / 10.0
And I meant that! I used to think that Slamdunk was the best sports manga but this, THIS really knocks it down HARD! No, I am not bragging. I am dead serious. This manga is so good, that even you guys who are not American football lovers would enjoy it to the max!! Why is this so? First of all, I would say its because of Hiruma's very existence. He is the EPITOME of humour in this manga and keeps this story going. Other than that, the character developement in this manga is by far the best of the best. You don't just learn to love the characters but you tend to actually grow with them and understand how they feel most probably because the mangaka portrays their personalities so vividly and is reasonably logic to human behavior.

The main character is not the typical weakling-to-strong protagonist. He is actually quite firm at times but usually the 'cool' moment backfires with him denying himself...-,-" But throughout the story you'll see him change his goals and his ways to the point that you just can't wait to see what he's going to do next!

Just so you know, ALL the other characters in this story is just as fun and strong-willed as the main character. Everyone has their traits, their own weakness and their own goals. It is exceptionally fun to see all of them fight each other. The training, battles and obstacles is to me, the most well organized out of ANY other manga. This manga may be fictional but it just feels so damn realistic!

In terms of relationships, the friendship and trust is fulfilling. There are a few hints of romance but it was never finalized so let's just leave it at that! Last but not least, if you read this manga and not laugh, you're either not human or you don't understand English. Enough said.

My rating for this manga will never change even if someday I do find something better because this manga deserves it so much that I wish that the ratings were higher than a 10... I am proud to be one of those who have finished this manga because for those who haven't, you have no idea what you're missing!!

Oh yeah, wanna know how much I liked it? I did not stop reading it for 2-3 days straight. Trust me on this. Read it, laugh, and enjoy the awesomeness.

Almost perfect.
by MondSemmel
January 11th, 2012, 12:50pm
Rating: 9.0  / 10.0
Much has been said about the greatness of this manga, and I don't disagree. The action is awesome, Hiruma Youichi is a spectacular character, etc. pp.
I'm just sad about the bad aftertaste the last 3 volumes (the "World" arc) left in my mouth. They were just not up to par. Before that arc, the manga should have ended; instead, it ended up with 3 more volumes that featured far too many characters to go as in-depth with each one as it had before. It's much better when a manga has a slow start and then rapidly becomes better...
So, essentially a perfect manga for the first 34 volumes, but so (comparatively!) disappointing in the last 3 volumes that I'm not sure I recommend actually reading them (despite a few good moments).
Was this comment useful?  Yes

To date, I have yet to find another sports manga that did character development as well as Eyeshield 21. ES21 took the characters and gave them growth - not through tacking on more ridiculous skill sets, but through actual growth in their personalities. You see Sena growing from that wimpy little guy in the beginning to the little guy who somehow ends up standing against giants without backing down (too much), and the growth happens in a believable manner.

Aside from the awesome main cast, the manga had another thing going for it: it's very well-written. No, I'm not talking about the rules to the game - I have essentially zero knowledge of how american football is played. I'm talking about story and execution - the pacing, the timing, the buildup... it's great. It's very well put together and planned out - plot points get pushed forward and wrapped up at just the right times, which makes it a quite enjoyable read.

I won't say there are no flaws with this though - the last arc, in particular, really just reads like the team got forced to write an extra ending arc to the series and wanted to end it as soon as possible - it was rushed and didn't feel like it was sketched out very well. But nevertheless, that doesn't negate that the main tournament (or plot, if you will) was really good. And to be honest, this particular arc wasn't actually horrible - on any other manga I would've accepted it without thinking about it too much, but it just wasn't to ES21's standards.

ES21 is really a rare breed as far as sports manga goes - it manages to fit good writing, characters, actually funny moments and pretty awesome art into a really ridiculous, done-to-death genre. I very rarely give out such overwhelmingly positive reviews, but this is definitely worthy.

nice
by lizard_eli951
June 15th, 2011, 2:05pm
Rating: N/A
i love the story. i LOVED hiruma. it was hilarious.it was an awesome manga, but the ending.... it sucked. it was rushed even the whole tournament everything when super fast. i was disappoimted
Was this comment useful?  Yes