Login to add items to your list, keep track of your progress, and rate series!
Description
Satoko is a domestic girl with a kind heart. She lost her father when she was little, and her family has been very poor ever since her father's company shut down. However, life is happy enough when you are optimistic, and Satoko enjoys her daily life heartily. One day, she is rescued from a attacking dog by Fuuma, an extraordinarily mature 10-year-old boy. Little does Satoko realize that this boy is the head of Wakudera Corporation, as well as her future husband! 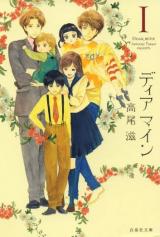 W H Y
by eightworldwonder
November 17th, 2018, 9:28am
Rating: N/A
I just read the synopsis r yall fr the boi is 10 and the girl is basically an adult this is straight up pedophilia im—


Tbh it would go so well if the genders were vise versa
Was this comment useful?  Yes

I Loved It So Much
by Nemurenaiyo
May 18th, 2016, 11:44pm
Rating: 9.0  / 10.0
Okay, to be fair, I'm the sort who hunts down mangas of this kind. I just like the dynamic between elder female protagonist who's paired with a younger male lead. It's adorable, to me at least.
But what I liked most about this series is the slow build to their romance. Logically, no one could keep their cool if they had to marry a child out of their families' whims. But the female protagonist tried anyway and ended up genuinely caring for the male lead which went pretty well!
You see, it'll keep you wanting to see more of their relationship and it'll keep you hoping to see how their relationship could progress. That's what I felt and I just hoped that the mangaka would've at least shown their future or of some sort. [SPOILER] Nope, she didn't. Which was kinda too bad. It would've been a more satisfying read that way.
But if I had to recommend something to my friends to start reading manga, this one would probably be up on the list. It's good.

Nothing Special
by plotrobert
April 27th, 2016, 1:45pm
Rating: 6.5  / 10.0
If I could sum up this whole manga in one word it would be 'unfocused'. There's a few times when I was a bit confused as to what was going on, and the plot just kind of meandered about. Sure it's cute but it's unfortunately not very interesting.
Was this comment useful?  Yes

Cutest. Romance. Ever.
by Nyajinsky
July 19th, 2015, 4:32am
Rating: 9.5  / 10.0
Story
Satoko (16) lives with her mother and there is a large debt they have to pay. Her mother decided to take the offer of an arranged marriage for Satoko. They both move to the house (mansion) of Satokos future (rich) husband. But her to-be husband, Fuuma, is now only 10 years old. This sweet slice of life manga shows us their everyday life and the beginning of their love.

Although the story seems unoriginal, the storytelling was done very well.

Art
Art is simple, I don't think I found some panel badly drawn. The anatomy is good, the faces are beautiful, it was easy to tell the characters apart, but there weren't that many. The art is kind of sketchy. Actually it had that kind of art I like the most. But I can't give it a 10, because there wasn't really much drawn. Simplicity at it's best.

Characters
Satoko is a nice girl, optimistic, a bit of an airhead. I wouldn't say she was clumsy or stupid. She cared for people and wanted everyone to be happy. Kind of reminded me of Tohru from Furuba. You can't really hate her.
Fuuma, a 10 years old boy was quite unrealistic. He didn't act his age, but there were times he did. These were enjoyable. He was flustrated he is younger that Satoko. That made him even younger, lmao. You can't really hate him either.
Although I did hate her mother a bit....... Well, nothing's perfect.

Enjoyment
I actually ate every page. Not literally. Couldn't stop reading. It was like made for me. Even the idea of an arranged marriage wasn't that horrible. It was really cute and sweet and I couldn't help but smile all the time I was reading it. Definitely something to read when you are down.
Was this comment useful?  Yes

Nice!
by AnimeFinder166
May 13th, 2015, 8:57am
Rating: N/A
I don't always read mangas that have the younger male older female category but this was an exception because when I saw the cover...I was like:"Oh...this one (looks) cute" yeah I just decide like that. Plus it has the category of Male lead falls in love first..it's just the right one to read at that time (my mood decides what category of the manga that i'll read)
and I was glad that I read this...this manga didn't fail me.
I really love the moments where Fuuma is jealous~
Was this comment useful?  Yes

I guess it was ok....ish
by RaikaRai
September 28th, 2014, 6:11pm
Rating: 7.0  / 10.0
Sometimes the drawing confuses me, during those fighting scenes especially, everything's all mumble jumbled up, just don understand what's going on. I think that it's draggy, the main points were the beginning where they met and the end where everyone share their past memories, then after that it could have fast forward few years later when Fuuma was taller, and see what new interesting feels Satoko will have for him. One thing I liked was that it was mutual love when he was still shorter than her, that shows that she loves him no matter what.
Was this comment useful?  Yes

cute and funny
by whitespade
August 4th, 2014, 4:07pm
Rating: 8.5  / 10.0
this is a great manga for any shotacon out there. the young boy is mature in his thoughts and his feelings, but sometimes he shows his child-like cute sides that make you just want to squeeze him. the girl is the stereotypical helpless naive urchin, but i think she complement him in making him look more mature by taking care of her, but still retain the childish quality when she take care of him like a mother.

all the other characters are also good people that is easy to like. i also love the humour in here, where the hazy drawing becomes compacted when funny expressions were drawn in. the plot is inevitable, but is doesnt matter because the most important thing is the characters.

do read this if you love cute shota acting mature!
Was this comment useful?  Yes

AAaaaw :D
by greatyu
July 5th, 2013, 7:51am
Rating: N/A
An awesome manga, i prefer shotacons like these, even though the child is 10years old you seriously get the feeling of a matured man. Satoko however shuld be more strong though.
Was this comment useful?  Yes

<3
by Imsexyandiknowit328
February 9th, 2013, 6:42pm
Rating: 10.0  / 10.0
Yeah, the guy is ten and she's seventeen, and as a seventeen year old girl myself I can't imagine falling for a ten year old, but hey, it's a manga, so whatever lol. THIS MANGA IS SO CUTE. Like, I couldn't stop smiling and my heart kept squeezing and whatnot. So adorable! One of my favs, definitely. I've read it, like, four times since I first discovered it at 15. Loves. <3
Was this comment useful?  Yes