Login to add items to your list, keep track of your progress, and rate series!
Description
Life at Hyosan High School is nothing special… until the students realize they’re in ground zero of a deadly virus that turns its victims into flesh-eating monsters. As the virus tears through their schoolmates in a matter of hours, they realize they have nowhere to run. Trapped in their high school with zombified versions of their friends and teachers, they must find a way to fight -- and escape with their lives.

Latest Release(s)
c.1-9 by LINE Webtoon about 1 year ago
Search for all releases of this series 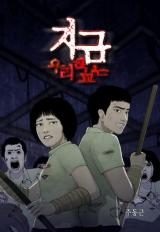 one of the first webtoons
by milkgreentea
March 9th, 2022, 10:20pm
Rating: 7.5  / 10.0
it was ok. got a lot better after episode 40. the beginning had very short chapters and they were action scenes so a single scene got dragged out over several episodes. the author loved to also include several unnecessary panels of people's faces to show their gradual reaction during an action scene, which didn't help with the storytelling delivery and pace; the panelling choices weren't always the best. the episodes got a lot longer later on. episode 126 was the most well-written episode in this series.
Was this comment useful?  Yes

It's so emotional reading from start to finish. I have so many feelings right now. What a ride. Wow. This is reminding me of DEAD DAYS, which is another really good and realistic zombie webtoon.

I suggest having access to all the chapters all at once so that you don't get bogged down by the daily pass silliness on LINE Webtoon. You see some people complaining about that here and yeah, it can be a pain. It worked for me though as I had to prepare myself mentally and emotionally before reading, so I hoard and read a bunch of em at once.

And that last panel on the last chapter.. that final reveal / ending. Ugh!

This is how a zombie apocalypse should be like
by ekushay
December 23rd, 2021, 9:42pm
Rating: 9.0  / 10.0
I have always disliked how zombies is such a cliché trope in media, but I love how this story realistically showcases what would happen in this type of disaster event. I've read "My Daughter Is A Zombie", and this webtoon gives similar vibes in the portrayal of a zombie outbreak, but the difference is that that was mostly a comedy, and this one is more drama and realism and it's not at all funny.

The way the characters survive and navigate through the 7 days is excruciating -- this is what Kesaran's comment is complaining about, that the pacing is bad. But uh, try being stranded for even one day and see how slow time passes by when that happens. When isolated and in survival mode, time becomes does not become a friend.

But, not to dismiss the thought on the slow pacing: yes, the kids did spend 90% of the story waiting or running around in the school, and the action scenes were so spread out that even one event could happen over several chapters. But the point of the "drag" is to draw out the emotions of what is happening and the direness of the situation. That is why this webtoon is realistic, because unlike other cliché zombie movies, this one REALLY focuses on the bond that the characters had and how hard it is to "kill" a zombified person. To a high school student, putting an end to someone's life is extremely unfathomable. Most people can't even butcher a live animal by themselves. I appreciate that the author illustrated and showed the psychological and emotional impact that the kids went through.

(Also, I think the fact that this is a daily pass series does not help with the pacing at all LOL)

I didn't quite care about the adult world, but it was important to look at what was happening to try and resolve the zombie outbreak. There wasn't the same level of emotional attachment to the adult characters compared to the students, but it was the high school that was the focus of the story, so that's fine.

The character building is phenomenal, and I can't help but mourn over all the characters that died. No, that's not a spoiler, because death is to be expected in a zombie story 🤣.

The art, too, is something that deserves praise. Those zombies are uglyyyyyyyy, and I mean that in a good way.
Was this comment useful?  Yes