Login to add items to your list, keep track of your progress, and rate series!
Description
From Fallen Syndicate:

The duty of the Twelve Apostles is to seek out and destroy the vampires of this world. Bearing a grudge against vampires and the pure blood who created them, Gilles has successfully passed the first two parts of his exam to become one of the Twelve Apostles. For the third and final part of the exam, Gilles is assigned a partner named Luna and together they must travel to a nearby town and kill a vampire named Alan. Will he pass his exam and become an apostle? And who exactly is this girl named Luna? 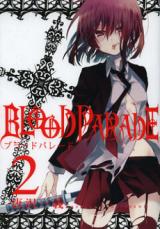 Despite the corny title, it's not bad.
by crazyboutcute
November 21st, 2013, 12:22am
Rating: 7.0  / 10.0
I agree with the previous reviewer. This poor manga was definitely screwed by its publisher, which really is a shame because it had great potential for an intricate and engaging plot and deeper character development. Still, it was quite a fun read. I rather liked the main characters and their relationship. They have a lot of chemistry that would have been ripe for expansion had the series been continued, and they are both very personable and endearing, even though we only get to meet them mostly on a surface level. The character designs are also quite eye-catching, and it's a pity more wasn't done with them (again, resulting from the manga's brevity). The art is smooth and clean and deliciously Gothic, reminiscent of a slightly fluffier version of Jun Mochizuki's style. Overall, I really enjoyed this manga despite feeling let down by the ending. Perhaps one day the author will get the chance to reboot or return to the series. In the meantime, I intend to keep my eye out for more of his/her work.
Was this comment useful?  Yes

It had potential ...
by Queenie-Beatrice
October 26th, 2013, 6:49pm
Rating: 6.0  / 10.0
But this series was most definitely "axed" by the publishers. There were a number of characters that were introduced but never expanded upon, and seemed to be going to play a major role. Some points were brought up but never given any conclusion. The entire ending was rather contrived and outlandish, and the hero never really develops.

In spite of its ending, it was an okay read. From the get-go, however, the pace was really rushed. The main characters were also pretty flat and generic as well, although not too bland to make me stop reading - some of the introduced characters I mentioned had some pretty interesting character outfits and designs, though. The art was pretty good, which is probably its one redeeming factor. The story also (somehow) piqued my interest, although the series ending brought a rather large "That's it?" reaction.

I probably won't read this series again, although I'm still wishful for a continuation.
Was this comment useful?  Yes