Login to add items to your list, keep track of your progress, and rate series!
Description
Touch is a shounen story about two twin brothers, a pretty girl next door, and that good old pastime of baseball. 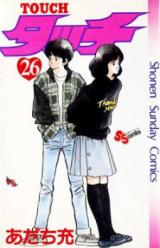 The Love of brother to his little twin
by Alibaba_Saluja
August 15th, 2017, 11:16pm
Rating: N/A
what a touching story. This manga totally superb. to summarize is, the story revolves around twin brother and a girl who were their neighbor. Both of the twin had a crush for the same girl (their neighbor). The older twin know his brother also liked the girl but suppressed his feeling at one point after something happen between his brother and him in the past (childhood) that makes a gap in their brother-like relationships. While the older brother very good at sport, his brother was not good at that area but very good in academics and a honor student of high school just like the girl (three of them studied at same high school). For the girl, she also like the twin but only romantically for older brother. At first, she thought the older brother didn't like her where the older brother always rejects her advance but understand it after know the reason though it breaking her heart sometimes. Like i mentioned before, the older was a sportive person which he good in Baseball and was an ace for the team. Why i said this was a touching story, it because the sacrifices made by the older brother and the girls as both of them had mutual feeling for each other. The older brother actually very excels in both academics and sports and he knew his brother wasn't good in sports, so he purposely chose the sports so his brother could have something he would be good at. (his brother know about this facts, the facts that older brother could excels in anything). The girl, she sacrificed her feelings for the older brother after know the "reason" why the older brother acts that way. though she actually just suppressed her feelings. Everything, they had did just for one reason, to make the life of a certain guy "happy" even they had to sacrifices their happiness. though they had a happy ending at the end (The older twin and the girl). to me, the little twin really a jerks guy, even after he knew his older twin did such a things to make him happy. sigh. Nice ending. the girl who's feels in love toward older twin at the end chose the same school of the MC's. they deserves for that.
Was this comment useful?  Yes

good but romance not my type...
by ajaykumaryadav
September 23rd, 2014, 10:19pm
Rating: 6.0  / 10.0
Spoiler (mouse over to view)
I believe in fair romance..
If his brother was not dead I am sure...our main hero would never have gone steady with female lead
....and female lead would have suppressed her own feeling due to our wussy hero....
....and unrealistic Thinking...why in the world one would become wussy just to make ones brother good...and his younger brother was damn selfish he already knew that our heroine love elder brother(hero) then also he claim her to be his as if she is an object...and doesn't know his elder brothers sacrifice... That jerk.....and in one chapter he was forcing kiss on her due to jealousy.....
Was this comment useful?  Yes

<3
by AndyProk
October 3rd, 2012, 4:47pm
Rating: 9.8  / 10.0
I already loved this manga years ago, I'll admit.
Having recently decided to learn Japanese, I chose this manga to help me with that (due to its Furigana). I'm still at the very first table of contents and already discovered a pun that's too awesome to translate:
Would you ever have expected that Tatchan and Katchan would have their first syllables written like they were foreign words in the chapter title? In other words Tatchan≃Touch and Katchan≃Catch?
I already liked Adachi-sensei's humor before, this raises him even higher

Great overall, but a few complaints
by merlockmagus
May 15th, 2011, 10:38pm
Rating: 9.0  / 10.0
I really like the slice-of-life and offbeat humor that Adachi offers in his manga. It's just so fun to read. I'm not here for the baseball -- just for the character interactions. Wow, Adachi really understands how people think.

However, you can tell how important a character is based on how 'good' they look. Henceforth, Harada doesn't even have a chance to compete with the Uesugi family for a romance. I really like Harada and Koutarou's characters, but it seems only pretty-type characters like Nitta and Tatsuya have 'raw' potential. In this respect, this is similar to Cross Game (and I suspect Adachi's other manga, as well).

I don't like the fact that most of the baseball team, save for the coach and Koutarou, hardly play a role in the story (or with the Uesugis). It's just given that Uesugi is the ace -- that he's the one that can pull the team forward. This is the same with Nitta on his team. I would've liked for a stronger team connection, considering how much the Koushien is sought after. But it seems to be all about fulfilling personal dreams and requests for the Uesugis and Minami. It would've hardly mattered what school they had chosen because even the school connection is so weak.

I'm not asking for pretty faces, but I would like for stronger relationships between characters. What we really see is a story about Tatsuya and Kazuya. This manga focuses a little bit about Minami and other characters, but this is all about a strong brotherly bond.

Good Story
by RS456
April 29th, 2011, 10:36am
Rating: 10.0  / 10.0
Touch is a very good story. It really has no plot twisting romances and mainly focused on fulfilling his dead brother's goal and his promise to Minami. It is the exact opposite of H2 and very similar to Katsu including the ending except that is about boxing and they are not childhood freiends in Katsu.
Spoiler (highlight to view)
It ends as life will continue as is eventually leading them to get married especially Touch.
It also has quite a bit of realistic comedy making it more enjoyable.

Better than H2 imo
by yuri999
March 3rd, 2010, 8:25am
Rating: 9.0  / 10.0
I found this to be much better and more engaging than H2. It was shorter and the characters were much better here. Even the relationships weren't all just "slap, kiss, slap" like they were in H2. However the ending here was totally great. The final baseball match in touch was more intense and actually engaging than the one in H2 which was in comparison tame. Altho I hated H2 and its ending, later on it hit me with how deep it was. Touch on the other hand doesn't have such a deep ending but it is more satisfying, believe it or not. I would suggest you read this first if you are a first time adachi reader.

Classic Manga
by topboy
May 31st, 2009, 7:51pm
Rating: 9.0  / 10.0
198x work from adachi mitsuru, This is so classic.
For me best 3 of baseball manga by adachi are 1.H2 2.touch 3.cross game.My recommendation is to read all of them if you like its, then read all other work from adachi (katsu-boxing,rough-swimming,miyuki-love comedy,nine-baseball,itsumo misora-super natural -- all completed scan)

H2 ending
by dark mage
March 30th, 2009, 9:09pm
Rating: N/A
@Brainskull. About the H2 manga ending, is the main character's relationship really resolved? I thought it didn't show who he ended up with at the end
Was this comment useful?  Yes

A little of both
by Brainskull
March 13th, 2009, 11:08pm
Rating: 10.0  / 10.0
This is Adachi's first or at least i think first baseball manga and I've seen both H2 and cross game parities in Touch. Even with parities all 3 have, each have there own path/story they follow. In this one the main character is probably the worst out of the 3, in about everything but one
Spoiler (highlight to view)
the girl likes him straight out and with very little strings attached
. On top of that he also has the hardest obstacle to over come out of the three. In terms of endings i liked this one better the H2 and will have to wait for cross game, but cross game looks like it will be a better ending then this one, hopefully.Comparing all three mangas
Spoiler (highlight to view)
Ok ill put Touch as the base and compare the other two to it. Touch vs H2, H2 is pretty much a 180 from Touch in about everything including the ending. In Touch, the main characters relationship is left to the readers, but whether he wins Kohsien is not. In H2 the main characters relationship is told and whether he wins Koshsien is left to the readers. When it comes to Cross game vs Touch, felt Cross game was faster version of Touch, at least what has been shown right now, of course there are some differences between the two but over all it felt like Adachi took Touch's speed dial and just doubled it and bingo Cross game but we will have to see the ending to make sure of that.
Was this comment useful?  Yes